Analysts downplay Trump threat to shut down government over immigration 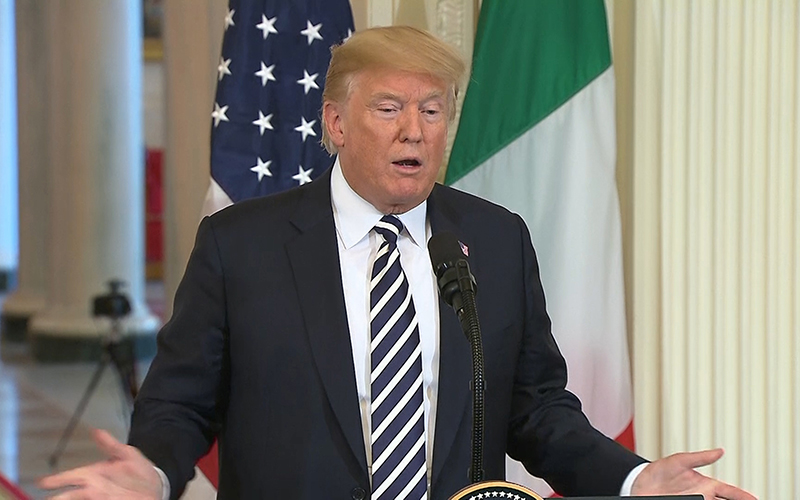 President Donald Trump on Monday repeated his weekend threat that he would consider shutting down the federal government this fall if Congress does not pass immigration reforms he wants, including funding a border wall. (Photo courtesy CNN)

WASHINGTON – President Donald Trump on Monday repeated a threat to shut down the government this fall if Congress does not approve the immigration reforms he wants, including funding for a border wall.

But analysts say the threat, first made in a tweet Sunday, is likely little more than a political ploy that the president is unlikely to see through.

“He’s trying to rally his base in time for the midterms, which don’t look great for his party,” said Alex Nowrasteh, a senior immigration policy analyst at the Cato Institute.

Trump’s comments come as Congress continues to struggle on immigration legislation, with the House on its August recess and scant time to act before the fall elections once they return.

The first came Sunday in a string of early-morning tweets in which Trump touched on immigration, the economy, the probe of possible Russian interference in the 2016 election and his treatment at the hands of the news media.

“I would be willing to ‘shut down’ the government if the Democrats do not give us the votes for Border Security, which includes the Wall!” Trump tweeted Sunday. “Must get rid of Lottery, Catch & Release etc. and finally go to system of immigration based on MERIT! We need great people coming into our Country!”

The president doubled down Monday during a news conference with Italian Prime Minister Giuseppe Conte, saying that the U.S. has the “worst immigration laws anywhere in the world.” Trump said he “would certainly be willing” to shut the government down to get the changes he wants.

“If we don’t get border security – after many, many years of talk within the United States – I would have no problem doing a shutdown,” Trump said. “It’s time we had proper border security. We’re the laughingstock of the world.”

But the changes Trump is demanding would require Congress to act before the Oct. 1 start of the next fiscal year – something it has been unable to do in years of wrangling.

The House last month took up two bills aimed at protecting recipients of the Deferred Action for Childhood Arrivals program, which defers deportation of immigrants who were brought to this country illegally as children. Trump has announced plans to end DACA, putting the future of as many as 800,000 recipients in jeopardy.

But the two bills, both backed by Republicans, failed in the face of what analysts called internal struggles within the GOP and a lack of Democratic support. One “compromise” bill was too lenient for more conservative Republicans, while the other was too harsh for moderates.

Sarah Pierce, a policy analyst at the Migration Policy Institute, said Trump’s threat was not likely to change that.

“It’s really more of a political ploy than it is any strategic plan or intention,” Pierce said. “Any threat to really shut down the government is really just a political ploy with an eye toward those midterm elections.”

Pierce said that she does not think Trump’s threat will affect Democrats, but that it may pressure Republicans to include funding for the wall in the budget.

Rep. Raul Grijalva, D-Tucson, said Monday that Democrats are “not giving Trump his wall, no matter how many angry tweets he sends from the golf course.”

But Rep. Paul Gosar, R-Prescott, said in response to the president’s tweet that border security is the “most important job facing Congress.”

“Stopping drugs, guns, terrorist and human trafficking from freely entering our country and flooding our communities should be a bipartisan issue,” Gosar said in a statement issued by his office. “The stakes are too high to play politics with America’s security. It’s time to build the wall.”

Whether that happens or not, Nowrasteh said Trump’s shutdown threat is not likely to be the deciding factor.