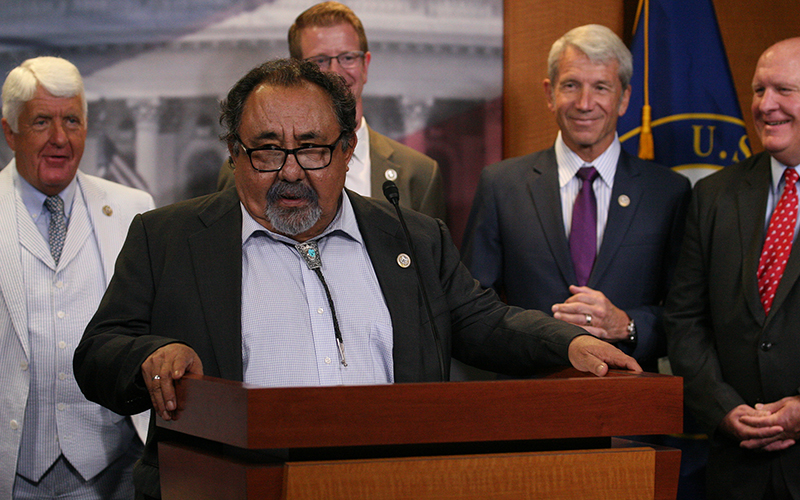 Rep. Raul Grijalva, D-Tucson, said funds from the bill will “go specifically to this issue of how we solve this maintenance backlog” at national parks, which reached $11.6 billion last year. (Photo by Sarabeth Henne/Cronkite News) 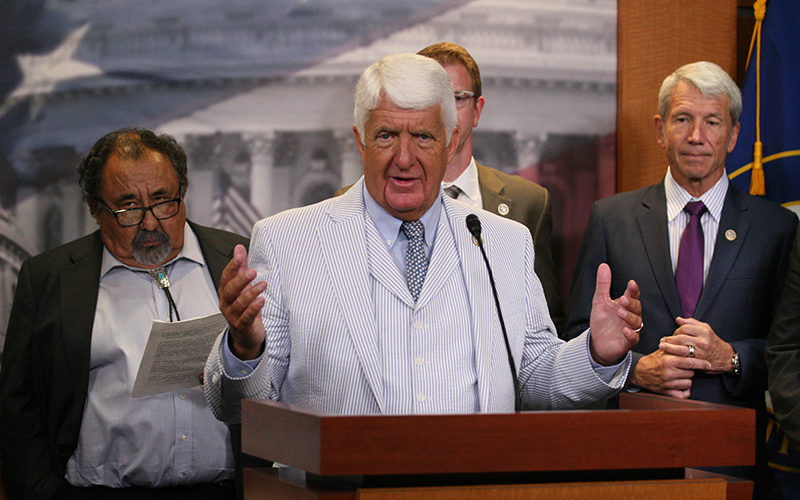 Rep. Rob Bishop, R-Utah. said that crumbling bridges, roads with potholes, leaking pipes and spotty electrical service, among other problems, are “not a disaster movie – it is our park system.” (Photo by Sarabeth Henne/Cronkite News)

WASHINGTON – Reps. Raul Grijalva and Rob Bishop agree on almost nothing, but the two came together Wednesday to back a bipartisan bill that could steer billions toward a national parks maintenance backlog that reached $11.6 billion last year.

Grijalva, a Tucson Democrat, and Bishop, a Utah Republican, unveiled the Restore Our Parks and Public Lands Act, a bill that would dedicate otherwise unallocated revenues from energy production on federal lands to be used on the backlog, which has reached $531 million in Arizona alone.

The act would provide up to $1.3 billion a year for five years, a potential total of $6.5 billion, for the newly established National Park Service and Public Lands Legacy Restoration Fund beginning in 2019. The bulk of the funds would go to the National Park Service, with smaller amounts dedicated to the Fish and Wildlife Service, the Bureau of Land Management and the Bureau of Indian Education.

“If you all … envision in your own mind a situation where bridges are crumbling, and roads are full of potholes and the pipes are all leaking, and the electrical grid is very spotty – it’s not a disaster movie,” Bishop said. “It is our park system.”

Bishop echoed Interior Secretary Ryan Zinke, saying the popularity of the park system had led to it being “loved to death” by hundreds of millions of visitors every year.

But if those parks “are not open to and accessible to people, then there’s no sense to having a park in the first place,” Bishop said.

In Arizona, Grand Canyon National Park had 6.2 million visitors in 2017, according to the National Park Service, and an estimated $330 million in deferred maintenance. That makes up the bulk of the backlog for the state’s 23 parks, monuments and historic sites.

Parks advocates welcomed the potential infusion of funds but worried that it will end up being a short-term solution to a long-term problem.

“It takes sustained funding over the long term and permanent funding,” said Tim Peterson with the Grand Canyon Trust. “I think that it’s really up to Congress to commit sustained and permanent funds to make sure the maintenance needs in our national parks and public lands can be adequately addressed.”

Kristen Brengel, the vice president of government affairs at the National Parks Conservation Association, said the Grand Canyon is particularly at risk because of its scope, high traffic and the age of the park’s infrastructure.

“The Grand Canyon is … one of the most incredible examples of a deferred-maintenance problem,” Brengel said. “The water that is sent to the South Rim of the Grand Canyon, the water pipe is bursting continuously. This absolutely needs to get fixed.”

Brengel said the backlog needs to be addressed directly and completely in order to give people assurances “that the Grand Canyon is open and accessible for visitors.”

Grijalva and Bishop are the senior Democratic and Republican members, respectively, of the House Natural Resources Committee, which improves the bill’s chances for passage. They conceded Wednesday that this bill is not a permanent fix.

“I do want to emphasize that this bill is a patch, not a permanent solution,” Grijalva said. “If we want our parks and public lands to succeed, we need to sustain base funding for all our public land agencies.”

Besides bringing badly needed funding for park repairs, Bishop and Grijalva also said they hope their bill can provide momentum for renewal of the unrelated Land and Water Conservation Fund, which expires Sept. 30

Bishop did not offer a timetable for hearings and action on the bill. But both men said they are confident in its chances, even though there are likely to be tweaks, and Bishop said he is already talking to senators who are interested in signing on to a similar bill in that chamber.

“There will issues that will be discussed as it goes through the political process,” Bishop said. “But we will solve those problems at the same time because this is an issue that must be solved, and we cannot wait any longer to do it.”

Brengel said that the bill is about supporting more than just the parks, but the environmental and economic benefits they bring to their communities.

“It’s not just about picking parks over other things,” she said. “By picking parks, you’re also picking the economy and you’re picking communities across the country that benefit from the income that parks bring to them.”