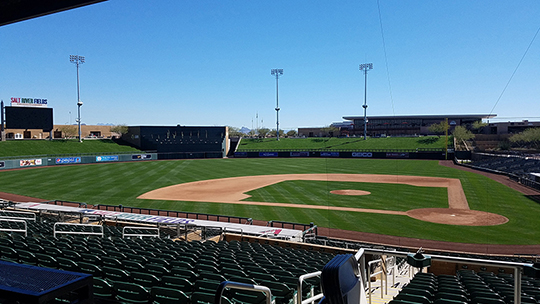 SCOTTSDALE – Saager Buch made his way to groups sitting on the lawns of Cactus League ballparks. One by one, he rattled off about 20 questions to capture information about how much they spent on their hotel, where they came from and the length of their stay.

The junior research economist at the L. William Seidman Research Institute at Arizona State’s W.P. Carey School of Business had joined a group of other ASU students to repeat this process at all 10 Cactus League stadiums.

“We tried to make sure that we hit every stadium at least twice,” Buch said. “It was funny. We had done it so much we all had our favorite spots. So my favorite spot turned out to be the lawn where people are kind of lounging around and having a good time.”

Their goal: Collect a large enough sample size to ensure their study’s accuracy. By the end, the team had conducted these surveys 3,910 times – that’s 300 at each stadium. Once they finished, they went back to the Seidman Research Institute, logged their numbers on a spreadsheet and began analyzing the answers.

On Monday, they shared the results with the media. In 2018, the Cactus League generated a $373 million bump for Arizona’s gross domestic product, according to the study. Spring training had a total economic impact of $644.2 million, an 11 percent increase compared to the results of a 2015 study that was not conducted by ASU.

“These figures tell the story of Arizona’s awesome power as a tourism engine,” Cactus League President Jeff Meyer said. “It emphasizes just how important we are in this community.”

Similar studies have come out from ASU before. The Carey school has produced the economic-impact reports from Super Bowls, Final Fours and college-football national championships that have landed in Phoenix.

Unlike those, the Cactus League season is an annual event.

Phoenix bids and hangs its hat on the acquisition of countless mega-events – as it did with the 2023 Super Bowl and the 2024 Final Four, which will both be played in Arizona – but it doesn’t rely on landing one. Why? Because the state gets to host one annually.

“This is like two Final Fours, and we get it every year,” said Dennis Hoffman, the director of the Seidman Research Institute. “It’s really on par with the Super Bowl. So when we have a Super Bowl, we have two Super Bowls.”

Debbie Johnson, the director of the Arizona Office of Tourism, described the Cactus League as a “tourism driver.” For many who book their flight and hotel to attend Cactus League games, it’s a vacation. And with vacations comes spending.

The W.P. Carey study found that a majority of visitors attending Cactus League games from outside of Arizona stayed for three to four nights, piling up a median spending tab of $405 each day, which was largely spent on hotels, food and drink.

Attendance for the 2018 Cactus League season declined from the previous year as the schedule took a 24-game hit. Yet the average number of fans increased from 2017 – the 223-game slate drew a total of 1.8 million fans, an average of 7,710 per game.

Studies like the one released Monday, which Meyer said they want to produce every other year instead of every three years, are not just a vehicle for good publicity, it’s validation.

The Arizona Sports and Tourism Authority provides funding to the state’s municipalities to help each upgrade its Cactus League facility and to help ensure the numbers generated from the W.P. Carey study only increase. When looking to acquire financing from the state, Tom Sadler, the president and CEO of the tourism authority, can point to the study.

“It tells a story of what it means for our state,” he said. “Should we need additional funding to do some things with Cactus League, I think it’s demonstrated very carefully and very clearly in that report that here’s the return on your investment.”