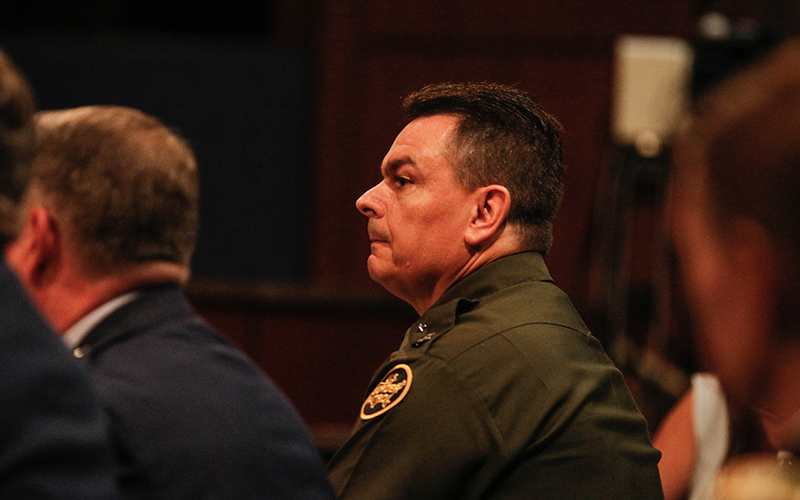 Rodolfo Karisch, chief patrol agent for the U.S. Border Patrol’s Tucson sector, told a House subcommittee that he welcomed the deployment of hundreds of National Guard troops to the border, saying “we need that help.” (Photo by Bryan Pietsch/Cronkite News) 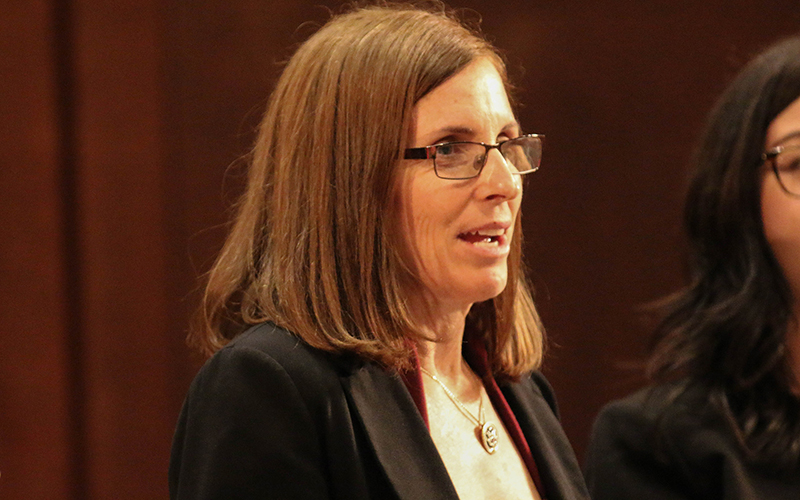 Critics on the House Homeland Security subcommittee called the deployment of guardsmen a “horrendous idea” that militarizes the border, but Rep. Martha McSally, R-Tucson, said she “wholeheartedly supports” the move. (Photo by Bryan Pietsch/Cronkite News) 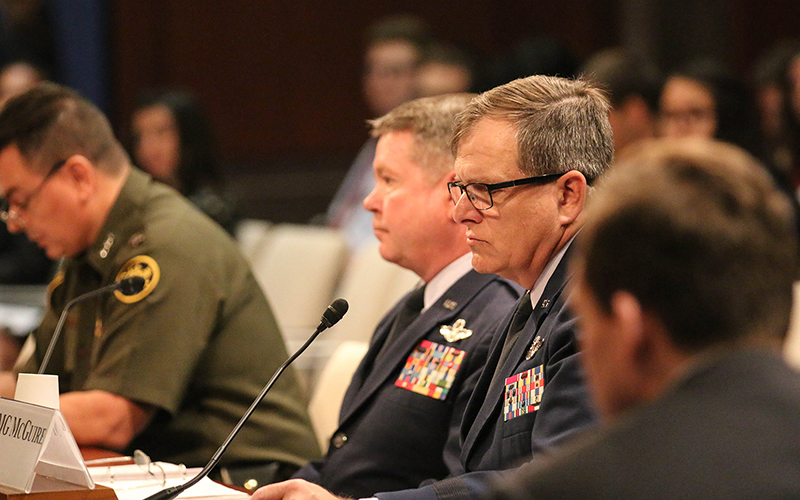 Maj. Gen. Michael McGuire, right, adjutant general of the Arizona National Guard, deflected a question about how long the deployment should last, saying that’s that a decision to be made by the administration, not the soldiers. (Photo by Bryan Pietsch/Cronkite News)

WASHINGTON – The chief of the U.S. Border Patrol’s Tucson sector told a congressional committee Tuesday that the deployment of more than 600 National Guard troops to Arizona’s border with Mexico has had “tremendous value” for border agents.

“Any assistance that we can get down on the border helps us,” said Rodolfo Karisch, the chief patrol agent for Tucson. “We need that help on the border.”

His comments came during what Rep. Martha McSally, R-Tucson, called a “how’s it going” hearing into the deployment of National Guard troops to the Southwest border that President Donald Trump called for in April.

The president authorized the deployment of up to 4,000 guardsmen to help fight illegal immigration “until we can have a wall and proper security” at the border. That number was later reduced to 2,000 authorized using Title 32, under which the federal government agrees to pay for the deployment.

McSally said she “wholeheartedly supports” the deployment that she said is needed to fight the flow of drugs, criminal activity and illegal immigration, which pose not only a “threat to our communities and families but also our rule of law.”

“This is an important national security and community issue, multifaceted to include the opioids and other things,” she said after the hearing of the House Homeland Security’s Border and Maritime Security Subcommittee. “This is overall a very positive thing.”

But Rep. Filemon Vela, D-Texas, criticized the deployment as a “horrendous idea” in which time and resources are being “misspent on political show.” He said that sending the guard to the border sends the wrong message about the immigration situation.

Those concerns were echoed by Vicki Gaubeca, director of the Southern Border Communities Coalition, who asked whether troops “who are basically trained for theater of war should be deployed at the border.”

“When you speak to some of the Border Patrol, there’s an assumption that everyone they encounter is an enemy,” Gaubeca said.

But Karisch said National Guard troops have helped relieve the understaffed and over-worked Border Patrol, which is thousands of employees below congressionally mandated staffing levels.

By putting guardsmen in areas like aviation and camera surveillance, more Border Patrol agents are able to get out in the field, he said. They have also helped with more mundane tasks like vehicle maintenance, doing repairs in two days that would normally takes agents weeks to complete.

Karisch said that National Guardsmen at the border don’t come into contact with migrants and don’t even participate in ride-alongs. But they have still contributed to the confiscation of over 11,000 pounds of marijuana, as well as various apprehensions of cocaine and heroin.

The effort is funded only through the end of this fiscal year and all three witnesses at the hearing – Karisch and adjutants general from the Arizona and Texas National Guards – said that they support further funding. But when Rep. Cedric Richmond, D-Lousiana, asked what “mission accomplished looks like,” the three were at a loss for words.

After the hearing, Maj. Gen. Michael McGuire, adjutant general of the Arizona National Guard, said that the answer to Richmond’s question is “not a decision that the general officers or uniform personnel make,” adding that it’s their job to follow orders from the administration.

But Karisch said it’s more than “simply an immigration matter,” citing the case of 284 pounds of marijuana and six individuals apprehended because of one guardsman’s aerial surveillance of the border.

“You’re still looking at a war on terror that we’re fighting, you’ve got guns coming across the border, you got cash, you got people, you got violence down there,” Karisch said. “Border security is a national security issue that we all have to apply resources to.”