A Mexican gray wolf, one of the species protected under the Endangered Species Act, in a photo taken in 2006. The status of the wolves and their need for protection are constantly debated by supporters and critics of the act. (Photo by Jim Clark/U.S. Fish and Wildlife Service) 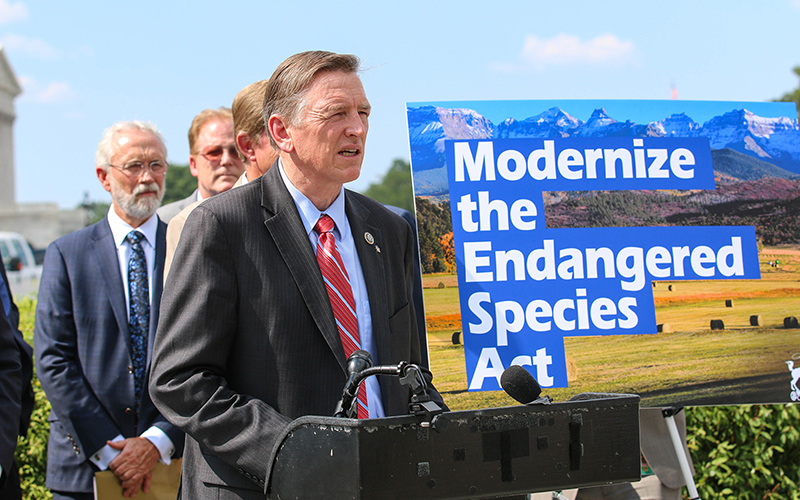 Rep. Paul Gosar, R-Prescott, is chairman of the Congressional Western Caucus, whose members unveiled a package of bills last week that they said are needed to modernize the Endangered Species Act. Critics said they would gut the act instead. (Photo by Bryan Pietsch/Cronkite News)

WASHINGTON – Trump administration plans to revamp the Endangered Species Act were hailed this week as “long overdue” by industry groups, even as environmentalists called the changes a “a massive attack on imperiled wildlife.”

The proposals unveiled Thursday by officials from the departments of Commerce and the Interior come a week after members of the House Western Caucus introduced a package of nine bills aimed at streamlining the act.

The changes proposed Thursday by the administration “make a lot of sense” to Kathleen Sgamma, president of the Western Energy Alliance, who said they would “reduce some of the red tape that prevents productive uses of the land in the West while at the same time protecting endangered and threatened species.”

But Brett Hartl, government affairs director at the Tucson-based Center for Biological Diversity, said the proposed revisions “would slam a wrecking ball into the most crucial protections for our most endangered wildlife.”

“If these regulations had been in place in the 1970s, the bald eagle and the gray whale would be extinct today,” Hartl said. “If they’re finalized now, (Interior Secretary Ryan) Zinke will go down in history as the extinction secretary.”

The three administration proposals still have to go through a 60-day public comment period before they can be finalized.

They include changing the procedures the government uses when designating critical habitat for a species, and assessing threatened species on a case-by-case basis, rather than the current “blanket” approach used by the U.S. Fish and Wildlife Service.

Another proposed change would remove the phrase “without reference to possible economic or other impacts of such determination” in listing and delisting species. Decisions on whether to put a species on, or take it off, the Endangered Species List would still be made “solely on biological considerations,” the proposal said, but it would allow the release of economic impacts that “may be informative to the public.”

“For too long we’ve seen restrictions in areas where the species doesn’t exist,” Sgamma said. “If you have to do those restrictive measures in an area that hasn’t seen that species in decades, then all you’re doing is constraining economic development and you’re not adding any additional species protection. So it’s a double whammy.”

Fish and Wildlife Service Principal Deputy Director Greg Sheehan said the changes were made in an effort to be “a good neighbor and … a better partner with the communities in which we operate.”

“We are proposing these improvements to produce the best conservation results for the species while reducing the regulatory burden on the American people,” Sheehan said in a prepared statement.

But Hartl said in a statement that, far from improving conservation results under the act, the proposed modifications are instead “a massive attack on imperiled wildlife.”

Rep. Raul Grijalva, D-Tucson, called the changes “reprehensible” and said that they should be “opposed and reversed.” He said the changes are “part of the endless special favors the White House and Department of the Interior are willing to do for their industry friends.”

House Republicans in the Congressional Western Caucus who introduced bills to change the Endangered Species Act mirrored arguments by administration officials, saying the 45-year-old act needs to be modernized.

Those bills included a measure by Rep. Paul Gosar, R-Prescott, to restrict designation of critical habitat on limited water infrastructure areas, and another by Rep. Andy Biggs, R-Gilbert, that would allow local and private studies to be submitted as evidence to remove a species from the endangered list.

Jordan Smith, executive director of the National Endangered Species Act Reform Coalition, said that the combination of the House bills and the “long overdue” Interior proposals have made for a “busy but exciting time” for his organization.

“They want a seat at the table,” Smith said. “It’s an opportunity for folks whose land and efforts go into the recovery to be a part of the conversation.”