Study: Arizona No. 43 in voter turnout; minorities, youth and poor are hurt most 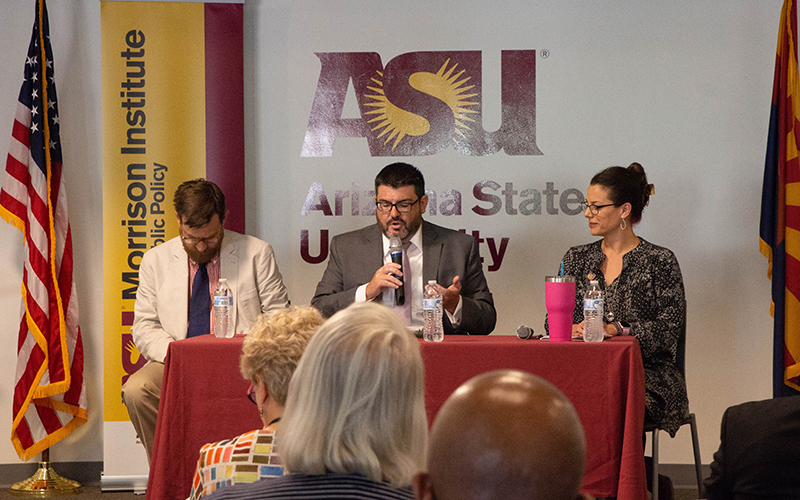 The panelists (from left) Tom Collins, Paul Avelar and Amy Chan answered questions about the Arizona Voter Crisis report, which concludes that poor voter turnout is a problem not only for Arizona but the nation. (Photo by Conrad Romero/Cronkite News)

PHOENIX – Voter participation is eroding across the U.S. and the situation in Arizona is a crisis, according to a study by the Morrison Institute of Public Policy at Arizona State University. The poor, minorities and young adults who would benefit the most by voting are the very groups that participate the least in the process, the study said, recommending engagement be fostered through education.

Local leaders in justice and politics agreed that the situation in Arizona is bad and needs to be addressed, but several noted that the trend toward lower turnout is a historical problem consistent from generation to generation.

Arizona ranks 43rd in the nation in voter turnout, and younger and poorer voters continue to not exercise their right to vote, according to the study, released at a press conference Tuesday by the Arizona Clean Elections Commission and the Morrison Institute.

The study says voters usually are more affluent than non-voters, pointing to education level and economic status as factors that create interest in governmental policy. 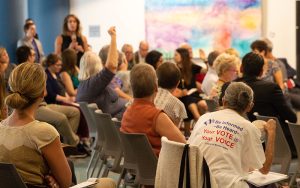 The Morrison Institute of Public Policy at ASU and the Arizona Clean Elections Commission will hold three town hall-style meetings around the state to discuss methods to improve voter turnout. (Photo by Conrad Romero/Cronkite News)

The institute aims to raise awareness of low voter turnout to turn the trend around. In Arizona, only 58 percent of registered voters turn out on average.

“Those with low levels of education, ethnic minorities and young adults are woefully underrepresented at the ballot box.” said Dave Daugherty, a senior research fellow at the Morrison Institute and co-author of the report.

Most political decisions on Arizona are made by middle-aged, affluent people, he said,
and the communities that would most benefit from voting aren’t participating in the electorate process.

He points to a particular demographic that’s of the most concern: Millennials. Born from the early 1980s to the mid- to late-’90s, millennials represent one-third the population in Arizona but represent just 25 percent of the registered voters in the state, and only 20 percent actually cast votes, according to the study.

Although the institute considers the situation a national crisis, other experts see it more of a cyclical condition.

Paul Avelar, managing attorney for the Arizona office of the Institute for Justice, a nonprofit libertarian law group, agrees that “people ought to care a lot more about state and local government elections” and that minorities and younger people should be encouraged to get involved in the electorate process, but he hasn’t seen any recent change that would make this a crisis.

“Why was it not a crisis in the ’80s, ’90s and 2000s, when participation rates were about the same and possibly even lower?” he asked.

However, other panelists agreed with the word “crisis,” saying it brings awareness to the contemporary chapter of this ongoing problem.

“The term crisis is being used to wake people up to the fact that this does need to change,” said Amy Chan, commissioner with the Citizens Clean Elections Commission.

Regardless, all the panelist agreed the numbers are concerning for Arizona.