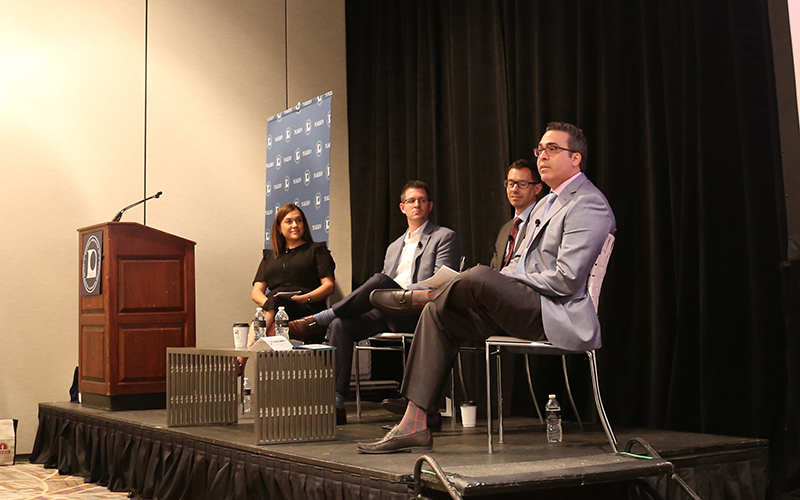 PHOENIX – Maricopa County patrol officers stopped Hispanic drivers for longer periods and searched them more often than other drivers, according to an annual report analyzing traffic-stop data. The results are similar to those over the past three years.

The newest report on Maricopa County Sheriff’s Office actions collected data to determine whether officers discriminated against Latinos and other minority motorists. A judge ordered the annual fiscal reviews after then-Sheriff Joe Arpaio was accused of racial profiling. The Arpaio policies later took root in the passage of the nationally controversial SB 1070, a state law that led to workplace immigration sweeps and allowed law enforcement officers to stop and detain drivers suspected of being in the country illegally.

Stephanie Fleischman Cherny, chief of staff for Sheriff Paul Penzone, who was in charge for the second half of the data-collection period for the 2016-17 report, said the department is committed to providing data to researchers and addressing inequity issues involving motorists.

“The sheriff is committed wholeheartedly,” Cherny said. “We continue to develop training and oversight and push forward with our plan to address any of these findings.”

MCSO “is working to change,” said Danielle Wallace, the lead researcher for the report, conducted by Arizona State University’s Center for Violence Prevention and Community Safety. “It’s not a fast process and we often don’t give them a lot of credit for that. There’s no way to start from scratch on organizational culture.”

In the fiscal 2016-17 report, researchers analyzed the frequency and length of stops, whether vehicles were searched, whether a deputy made an arrest, issued a citation or conducted a search. The report also examined the ethnicity of patrol officers and the drivers they stopped.

“It doesn’t surprise me that there’s still racially biased policing occurring,” she said. “You can’t fix this problem instantaneously. It’s something that just takes time and isn’t necessarily a reflection on who’s in charge per se, but rather this is a long, drawn-out process.”

Motorists most likely to be arrested

The recent report – the third of the annual fiscal reports – looked at more than 22,200 traffic stops conducted by deputies from July 2016 through June 2017, covering all Maricopa County districts and municipalities.

It found no improvement in rates of searches and arrests of Hispanic motorists compared with the previous years’ findings, which were compiled starting in fiscal 2014-15.

Traffic-stop times for all races and ethnicities decreased 59 percent, from about 24 to about 14 minutes, over the three years’ data that was collected. The stops remained longer for Hispanics than whites, but the report noted the gap narrowed over time.

The report didn’t find that any specific cases where officers engaged in discriminatory practices, instead revealing a more complex and systemic issue within the MCSO.

“These results collectively suggest systemic bias within the patrol function of the MCSO, rather than the problem being concentrated among a few deputies showing patterns of problematic behavior,” the report said.

“Racial differences in post-stop outcomes is a problem for all deputies participating in the MCSO’s patrol function and cannot be solved by removing a select few deputies engaged in the worst racially biased patterns of behavior.”

The annual reports on the MCSO are a court-mandated measure stemming from the 2007 case Melendres v. Arpaio, where the plaintiff alleged the MCSO was engaging in discriminatory behavior toward Hispanics during immigration sweeps and traffic stops.

In 2013, a judge ruled in favor of the plaintiff and ordered department-wide changes in policy. That included an annual report to collect and analyze traffic stop data.

In 2016, Arpaio was found to be in contempt of court for violating court orders to stop detaining individuals based solely on the suspicion that they were in the country illegally. Before his 2017 sentencing, however, President Donald Trump pardoned the former sheriff, to the delight of supporters and the outrage of opponents and civil-rights activists.

The controversy over treatment of Latinos extended outside the MCSO, to the rest of Arizona and throughout the country.

The 2010 passage of SB 1070, a law allowing police officers to request information regarding the immigration status of anyone arrested or detained under “reasonable suspicion,” affected the world’s view of Arizona.

“I remember that day when it passed because I cried all the way home,” Tolleson Mayor Anna Tovar said during a panel discussion at the National Association of Latino Elected Officials, or NALEO, conference in mid-June. She called it “the most stringent and hateful bill that our nation had seen or felt.” 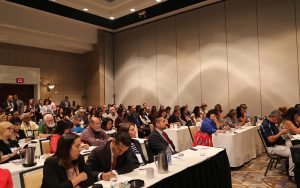 At a June NALEO conference in Phoenix, one session included a discussion about deterring anti-immigration legislation and policies. (Photo by Rebecca Spiess/Cronkite News)

Gonzalo De La Melena Jr., president and chief executive of the Arizona Hispanic Chamber of Commerce, said changes in state and local government leaders and the growth of such organizations as the Real Arizona Coalition, where business community and grassroots groups worked together to oppose SB 1070, have helped the state gain distance from a discriminatory label.

But Edward Vargas, a professor with the School of Transborder Studies at Arizona State University, pointed out at the conference that arrest rates and searches remain higher among Hispanic drivers.

“We like to applaud ourselves and pat ourselves on the back for removing Joe Arpaio,” he said, but that doesn’t mean the problem has been solved.

However, several NALEO leaders said the sheriff’s office has a changed attitude under new leadership.

“The tone, the approach that Sheriff Penzone has taken is moving us in a dramatically better direction than we were previously,” Melena said. “We’re grateful for his leadership, his changing of the DNA, of the mantra, if you will. And that’s more reflective of who we are and where we need to go.”