WASHINGTON – Customs and Border Protection is getting better at attracting and hiring job applicants, but the agency still faces thousands of vacancies in its law enforcement ranks, according to a recent Government Accountability Office report.

The report said that the number of Border Patrol agents actually fell from 2013 to 2017, at a time when the government was increasing the number of agent positions.

“It’s a huge deal, especially now,” said Art Del Cueto, vice president of the Southwest chapter of the National Border Patrol Council. “Now you have less agents… when you’re by yourself it’s easier for agents to be attacked.”

In a statement, the agency attributed the increase to an aggressive effort to target untapped areas for new hires. That includes a social media presence and outreach to “underrepresented groups,” which it said includes women and African Americans. 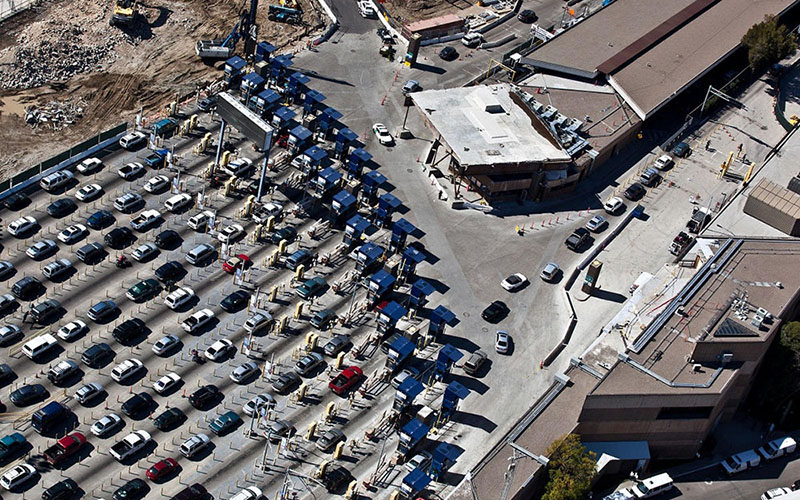 Cars wait to cross from Mexico at the San Ysidro, California, border crossing. Truckers say a shortage of customs officers not only inconveniences travelers but it hurts business. (Photo by Josh Denmark/U.S. Customs and Border Protection)

“CBP is continually striving to further diversify its ranks by going into markets that may not be as familiar with the CBP mission and the federal career opportunities it offers,” a CBP spokesperson said in the statement. “We are working to inform communities, along with recruiting qualified candidates.”

But while applications are up, the GAO said the agency is still burdened by an extensive and lengthy hiring process. Even though the time from application to hire decreased since 2015, it still took more than 300 days on average to hire an applicant in 2017.

The report said the agency has an 11-step process that includes an entrance exam, medical exam, fitness test, and a polygraph examination.

Del Cueto said the polygraph is one of the biggest issues in hiring new employees, who have told him “horror stories” about polygraph tests taking upwards of eight hours.

“You might as well waterboard them and get confessions out of these guys,” Del Cueto said of the extensive testing.

“Potential young men and women sit there and say, ‘Do I really want to try out for Border Patrol knowing there are issues?'” Del Cueto said. “It would make me think twice, all these horror stories.”

And understaffing at the border is more than an inconvenience just for travelers, according to Lance Jungmeyer, president of the Nogales-based Fresh Produce Association of the Americas. He said that when lines at the border get too long because of a shortage of customs officers, that delays produce-carrying trucks that need to cross in a timely manner to protect their cargo.

“For the produce companies, you want to be able to sell your produce as quick and fresh as you can,” Jungmeyer said. “If it’s stuck at customs, it can’t get through and that truck sits there and waits.”

Those delays have real costs: Jungmeyer said that if a truck of produce reaches its destination in the U.S. and the fruit is not as fresh as expected, the amount paid for the produce can be cut in half by the buyer.

“If things are slowed down and you think about the systemwide impact, it really adds up,” Jungmeyer said. “It raises the cost and exacerbates the (effect) on the produce.”

Aside from attracting new employees, another challenge facing CBP is retaining current ones. The report said one of the main complaints from CBP employees is that there is little to no room for relocating.

In its statement, the CBP said the department is “exploring innovative practices regarding incentives and mobility options that will enhance our recruitment prospects and improve our workforce attrition rates.”

Del Cueto said that it’s difficult to find people willing to work in remote locations, where things like restaurants, schools and shops are few and far between. He said that people moving to those locations from larger cities soon realize that transferring to another department could allow them to live in a bigger city or closer to family.

The GAO report recommended to CBP that the agency should “systematically collect and analyze data on departing officers” to help with retention efforts. The report said that CBP agreed with the recommendation.

But Jungmeyer said that even current staffing isn’t enough and that CBP needs to hire more workers to ensure security beyond managing what’s crossing the border.

“While it’s about national security, it’s also about – in the border region – economic security,” Jungmeyer said. “When there’s not enough CBP officers, that harms the economic viability of the border and everybody else in that supply chain.”