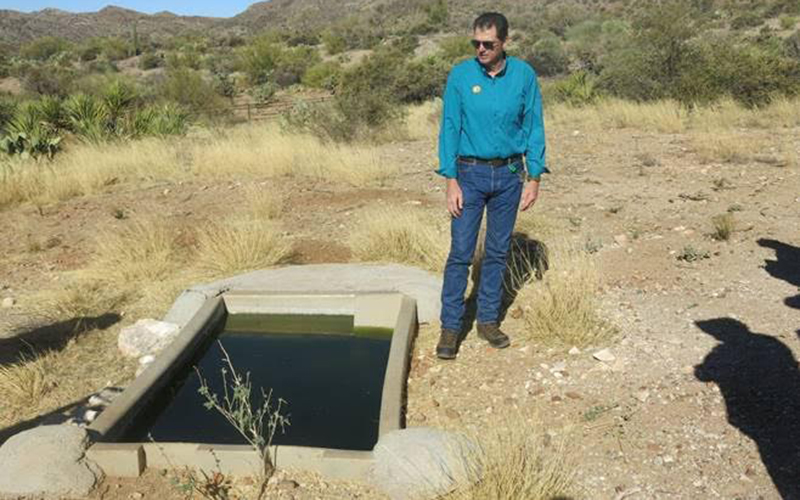 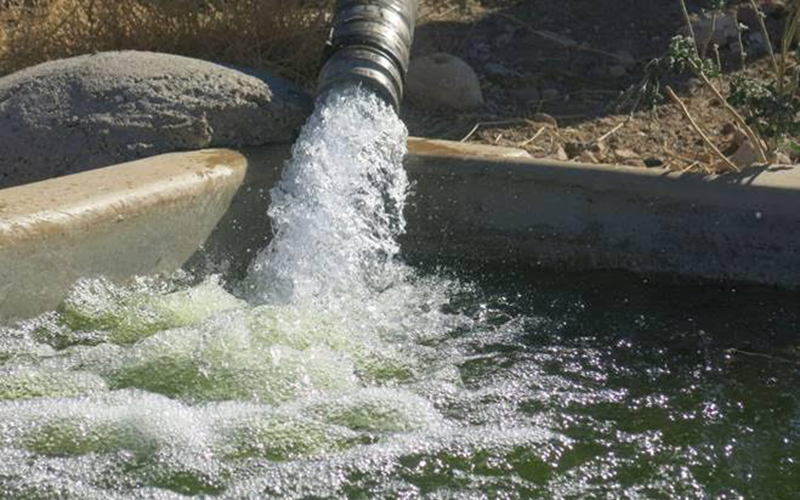 PHOENIX – As the drought that has gripped Arizona for two decades grinds on, humans increasingly are stepping in to help with food and water.

The Arizona Game & Fish Department manages 3,000 watering holes, or catchments, built in remote areas throughout the state since the mid-1940s. They originally were for small game, such as quail and dove, but by the 1960s, larger animals were using the catchments, signaling that the supplemental water is a much needed resource, particularly as temperatures rise and precipitation fails.

The catchments were meant to rely on summer storms to keep full, but the department in recent years has had to haul water in by truck – or by helicopter in inaccessible areas, such as bighorn sheep habitat.

Since January, Arizona Game & Fish has hauled 650,000 gallons of water to catchments, and unless the monsoon rains come, it will have to continue this costly method of sustenance.

“The winter was really dry, so by the end of last year, we were behind by 3 to 4 inches of rainfall,” said Joseph Currie, who manages the Habitat Planning Program at Arizona Game & Fish.

“This can get very expensive in both time and money,” he said. For example, the department paid $1,850 a hour to hire a helicopter for water drops near Tucson last month, according to azcentral.com.

To help defray those costs, the department is seeking donations from the public. You can contribute online or by texting SENDWATER to 41444. Fish & Game also has an “adopt a catchment” program. 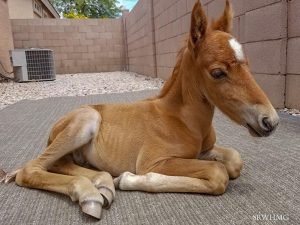 Since the foal was found on Sunday, it has gained 10 pounds but remains severely underweight. When he’s healthy enough, he will be released to a sanctuary near Prescott. (Photo by Salt River Wild Horse Management Group)

Drinking water isn’t the only concern for wildlife in an increasingly parched Arizona. The dry winter and spring have destroyed much of the vegetation that herbivores depend on.

This summer, the Salt River Wild Horse Management Group, a nonprofit dedicated to protecting wild horses living in the Tonto National Forest, started leaving bales of hay along the Salt River, in a program called the emergency feed protocol. The hay is spread in secret locations far from human contact so the wild horses are not at risk of becoming domesticated. Deer and elk also benefit from the supplement feed, volunteers said.

On Sunday, the group rescued a malnourished foal in the Coon Bluffs area of the Tonto National Forest, north of Mesa, that had been separated from its mother soon after birth. The male horse weighed just 33 pounds, half the weight of normal newborn horse and the smallest the group has ever seen, volunteers said. According to the group, the horse probably was born prematurely to a malnourished mare. Volunteers searched the area but did not find the mare.

The foal, still unnamed, is being cared for by Simone Netherlands, president of the Salt River Horse Management Group, in her Mesa home. Since it was found it has gained 10 pounds, It will be moved to a sanctuary near Prescott when it’s strong enough.