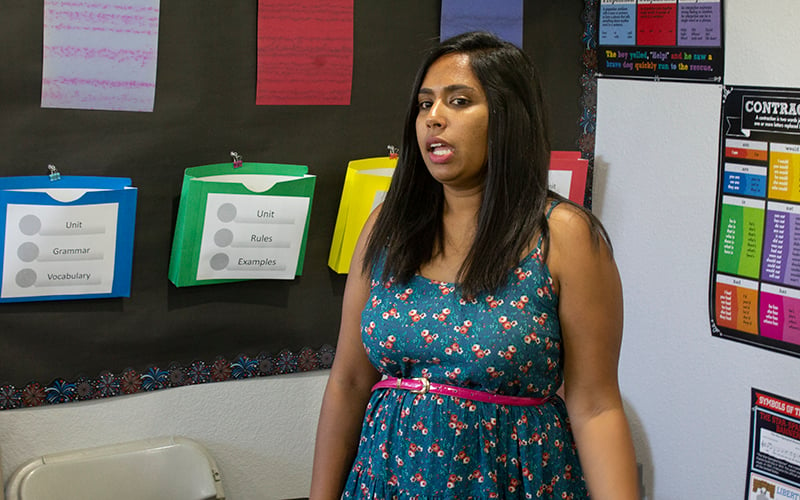 Rekha Nair, a former federal public defender, is a member of the Florence Project, a nonprofit dedicated to pro-bono legal services for immigrants. (Photo by Rachel Beth Banks/Cronkite News)

PHOENIX – Lack of information – and plenty of bad information – has led to heartache and confusion when family members search for loved ones who are in custody, immigration attorney Rekha Nair says.

Dozens of residents and immigration advocates gathered in Phoenix earlier this month to learn how to navigate the specifics of immigration-court cases, including how to locate detained family members through such online databases as the Maricopa County Sheriff’s Office inmate lookup and ICE’s Online Detainee Locator System.

On any given day, 3,000 immigrants, some of whom are citizens or legal permanent residents, are detained in Arizona, according to the American Civil Liberties Union of Arizona. 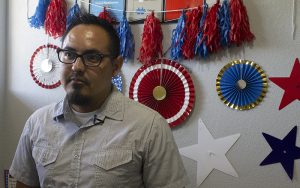 Aldo Gonzalez remembers translating in the fast-food drive-thru for his parents when he was just 5. Now, he wants to give back to others in the same situation. (Photo by Rachel Beth Banks/Cronkite News)

“There’s tons of misinformation out there about how the immigration system works,” Nair said, such as “who qualifies for bonds, who doesn’t, who is detained, who’s not? We definitely have people who haven’t been able to get in touch with family.”

Because local law enforcement officials must work with federal immigration officials, it can be difficult to figure out where an undocumented immigrant is being held.

“There are a host of ways that people are brought into the system,” said Nair, a former federal public defender and current member of the Florence Project, a nonprofit dedicated to pro-bono legal services for immigrants. “One really troubling one in my view is a traffic stop, where all that’s supposed to be addressed there is the issue of a ticket, and I think it’s unfortunate that in Arizona, (if) you’re undocumented, you can’t get a license.”

If an officer arrests an undocumented person for driving without proper identification, it’s difficult to find out where the detainees are, said Nair, who helped to lead the training.

“Someone will call me and they’ll be like, ‘My family member was just detained. They’re in immigration,’” Nair said. “And my question is actually, like, ‘Are you sure?’ A lot of times, people are actually not in immigration – or they’re not there yet.”

Without family members, Nair said, immigrants in custody may become discouraged while making their way through court. 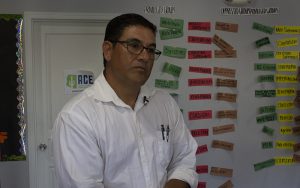 Aldemaro Peña Figueroa endured a 16-year battle to become a U.S. citizen. He now wants to help others do the same. (Photo by Rachel Beth Banks/Cronkite News)

Living United for Change in Arizona (LUCHA), a nonprofit that works with lower- and middle-class families to advocate for racial and economic equality, conducted the training session. Aldo Gonzalez, immigration services coordinator at LUCHA, helped Nair walked the attendees through a common scenario: What happens when a driver without documentation gets pulled over in Maricopa County?

In that case, the driver will be cited for driving without a license and taken to the county’s Fourth Avenue Jail. Authorities will run the driver’s fingerprints, and once officials realize the person is undocumented, Immigration and Customs Enforcement agents stationed at the jail will take the person into custody upon release by county sheriff’s deputies.

The training was personal for Aldemaro Peña Figueroa, who moved from El Salvador as a legal permanent resident in 2001. He did not become a naturalized citizen until 2017.

The continuing rush of Salvadorans fleeing violence and poverty in his home country, and the current issue with family separation at the southern border, saddened and emboldened Peña, he said. The Mexican Consulate fights for Mexican people, Peña said, but the Salvadoran Consulate is falling short in the protection of its people against the U.S. government’s policies.

The same policies, Peña argued, that are “creating the structural conditions for (immigrants) to die.”

Peña came to the training to learn how he can help.

“I can actually visit people at the prison and try to give them some hope,” Peña said.

Other ways advocates can help, Nair said, is to donate to legal services and team with local nonprofits, such as Trans Queer Pueblo and Puente Human Rights Movement, that visit incarcerated migrants.