Under a new system, Mexican citizens could vote in the July 1 election by completing forms online and processing their voter IDs through the Mexican consulate in their country of residence. In the U.S. alone, more than 150,000 Mexican citizens registered. (File photo by Courtney Columbus/News21)

PHOENIX – Mexico’s crucial July 1 election will be the first in which citizens living abroad can vote without having to return to Mexico.

“Mexico is a country that has the biggest amount of people living outside of the country,” said Yuri Gabriel Beltrán, a counselor with the Mexico City Electoral Institute. “Voting is like a net so that they can continue to be a part of our community.”

In the past, Mexican citizens living in other countries had to travel to Mexico to register to vote. Under the revised system, all they have to do is complete paperwork online and process their voter IDs through the Mexican consulate in their country of residence. In the U.S. alone, more than 150,000 citizens are registered to vote for the election.

After registering, voters received a package with information on each of the candidates running for positions, and with the ballots themselves. The ballots were sealed in an envelope provided in the package and sent to the National Electoral Institute by June 30 so they can be counted on election day.

Mexicans will vote to fill more than 3,400 elected posts, including a president who will serve until 2024; every member of the legislative branch; and thousands of municipal officials.

Some people are skeptical of the new voting process, saying it could make it easier to commit fraud, but Beltrán said many precautions are in place to prevent that.

“This is very important for Mexico because people in the U.S. can change their address so often, so we want to ensure that when we deliver the materials to a home that the people living there are Mexican voters,” Beltrán said. 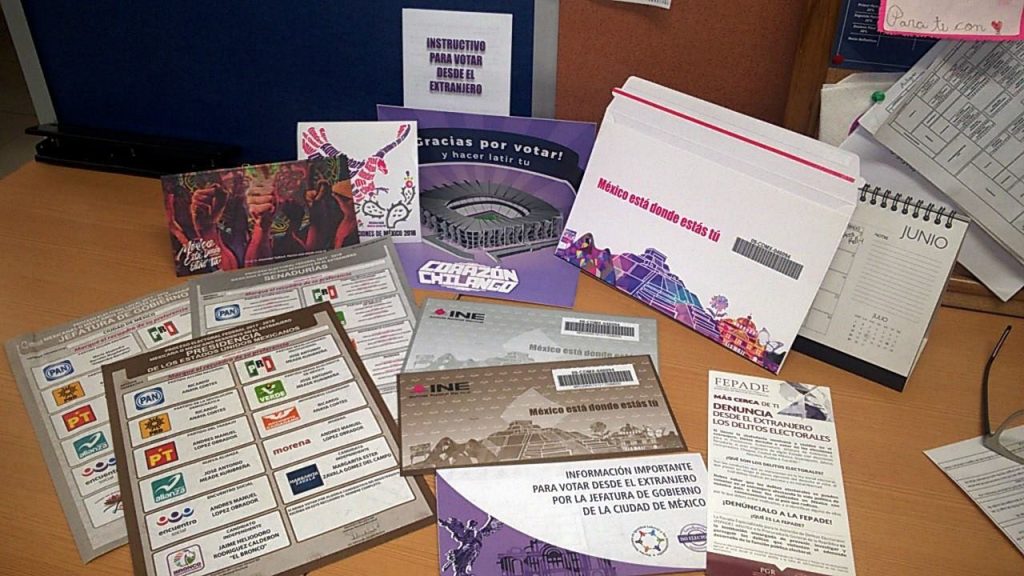 After registering, voters receive a package with information on each of the candidates running for positions and the ballots. (Photo courtesy of the Mexico City Electoral Institute)

Mexico has more than 90 million registered voters, so Mexicans voting from abroad probably won’t have a huge impact on the election outcome, said Duncan Wood, director of of the Wilson Center Mexico Institute. That isn’t the point, though.

Experts and voters from abroad conceded that allowing all citizens to vote, no matter their location, strengthens a democracy. Allowing Mexican citizens to vote could also bring certain issues in Mexico to light in neighboring countries that could potentially help.

“The key point here is about democracy, and I believe that citizens from a country should have the right and the ability to vote,” Wood said. “The Mexicans who are living in the United States, if they’re more connected to Mexican politics, then they can make an important impact on the biological relationship between the two countries.”

Many Mexican nationals also vote because they want to help their family members who stayed behind, at least in some small way. Some of the issues they are most concerned about are safety and freedom of speech. Although they’ve left their home country, they still feel a responsibility to remain involved in important legislative
decisions.

“We’re still Mexicans, and we’re really happy and proud to have dual citizenship,” said Carmen Cornejo, the owner of a communications company in Chandler who moved with her husband to the U.S. in 1991. “Even though we don’t live there full time, we still have our responsibilities and duties as Mexican citizens.”

For Oscar Hernandez, a DACA recipient who moved to Arizona when he was 9 years old, being able to vote without leaving the U.S. gives him the opportunity to do something he’s never been able to do. With a bachelor’s degree in public policy and a minor in justice studies from Arizona State University, he understands the importance of voting and is glad to take part for the first time.

“For me, especially with my policy background, I understand that things that happen in the U.S. will affect other countries, and of course Mexico,” Hernandez said. “This is going to open doors to individuals like myself and encourage those who unfortunately had to leave their country to still be engaged one way or another.”