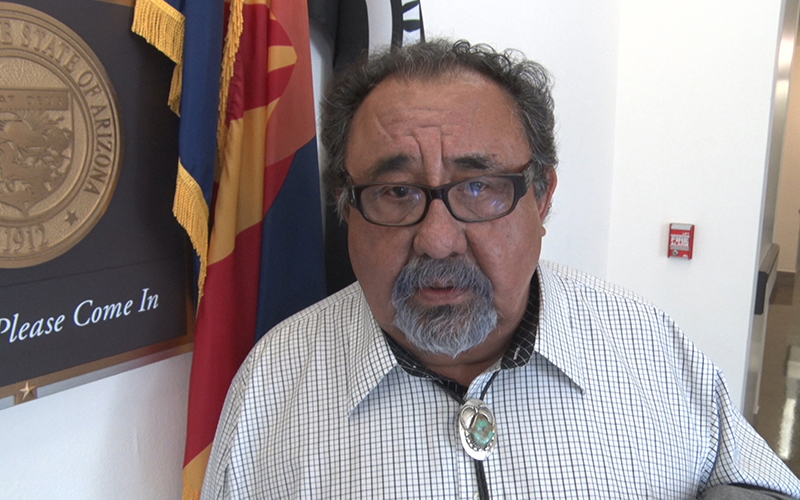 Rep. Raul Grijalva, D-Tucson, said the GOP-backed immigration reform bill was “terrible,” in part because Republicans refused to work with Democrats, who voted unanimously against the bill. (Photo by Pat Poblete/Cronkite News)

WASHINGTON – A last-ditch effort to get an immigration reform bill through the House was soundly defeated Wednesday, with almost half of the Republicans joining all Democrats to reject the Border Security and Immigration Reform Act on a 301-121 vote.

Rep. Martha McSally, R-Tucson, was the only Arizona lawmaker to vote for the bill, with the state’s four other Republicans joining its four Democrats in opposition.

“Securing our Southern border has been one of my highest priorities since I arrived in Congress three and a half years ago,” McSally said in a statement. “Like President Trump, I supported this bill because it represents a tangible solution for these important issues.”

The bill failed despite an all-caps Wednesday morning endorsement from President Donald Trump, who urged House GOP members in a tweet to come together and pass the “strong but fair” bill “even though the Dems won’t let it pass in the Senate.”

“Passage will show that we want strong borders & security while the dems want open borders = crime. Win!” he tweeted.

The bill was the latest attempt by GOP leaders to craft legislation that included the “four pillars” the White House demanded: protection for Dreamers, increased border security, an end to the visa diversity lottery and a reduction in family, or “chain,” migration.

But while it may have satisfied the president, it was not so popular in the House. Wednesday’s defeat was even worse than the 38-vote margin on a more conservative immigration bill that failed Thursday.

Rep. Paul Gosar, R-Prescott, said he couldn’t stomach protections for DACA recipients that were included in both GOP-backed bills.

“The root of the problem with the Border Security and Immigration Reform Act, better known as the ‘compromise’ bill, is the same as last week’s bill – it grants amnesty,” Gosar said in a statement after Wednesday’s vote. “We cannot compromise our country’s future by creating a special path for those not willing to wait in line.”

The Democrats – all of whom voted against both bills – said that proposed cuts to legal immigration and the inclusion of $25 billion for Trump’s border wall in Wednesday’s bill was too much to bear.

“The partisan bills put forward in the House failed to provide real solutions for the problems facing Arizona and failed to protect vulnerable kids,” she said in a statement. “This is shameful.”

House Speaker Paul Ryan said he intends to look at a narrower measure aimed at stopping the policy of family separation.

But Rep. Raul Grijalva, D-Tucson, said that any path forward on immigration needs bipartisan consensus, not the one-sided negotiating tactics he accused House leaders of engaging in.

“The key thing that this is a bill negotiated among Republicans,” Grijalva said. “There was no Democrats involved, they never reached out across the aisle so we could have had some effect of trying to make this bill better.”

He blamed Ryan for failing to deliver a more well-rounded approach, pointing to at least one bipartisan bill that was not allowed to come up for a vote.

“He (Ryan) has been terribly cowardly about going against the president or going against some of the more extremists in his caucus and allowing the rest of the members to have the opportunity to take a vote,” said Grijalva.