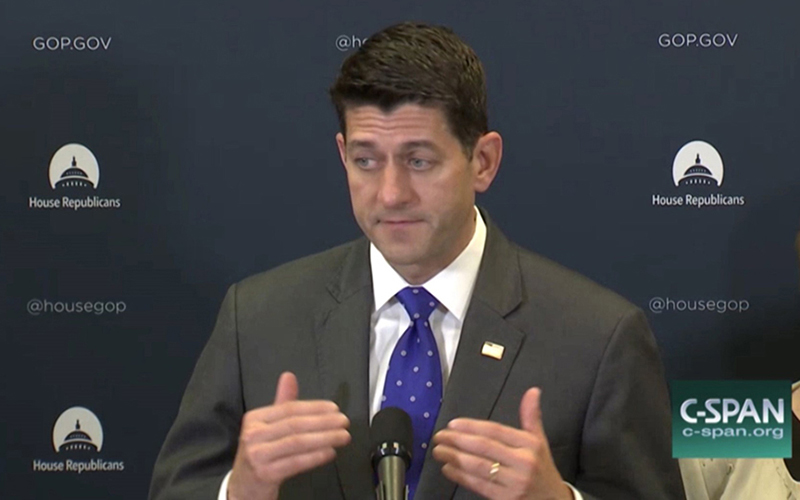 After the second Republican caucus in a week on an immigration reform bill, House Speaker Paul Ryan would only say Tuesday that the latest version of the bill has the “seeds of consensus” from members of his party. (Photo courtesy C-SPAN)

WASHINGTON – House leaders added employer checks and an expanded farmworker visa program in their latest attempt to get an immigration bill that can pass, but most lawmakers leaving a GOP meeting Tuesday morning appeared skeptical of its chances.

“Working through it still,” said Rep. Martha McSally, R-Tucson, after the Republican caucus meeting. “Always good to have a family conversation.”

That’s about as optimistic as it got after House Speaker Paul Ryan gathered his caucus behind closed doors in hopes of hammering out a compromise on the stalled immigration package, which could come up for a vote as early as Wednesday.

The latest effort to pass a bill comes less than a week after conservative Republicans joined Democrats to kill one GOP-backed plan, leading President Donald Trump to urge lawmakers to stop “wasting their time” on immigration reform until after the election.

Rep. Paul Gosar, R-Prescott, who voted against the bill last week, said he will not support any bill that includes a pathway to citizenship for DACA recipients. When asked if Tuesday’s tweaks would change his vote, he said, “No, not at all.”

Last week’s bill and the current version both include the “four pillars” Trump has said must be in any immigration reform bill: stiffened border security, a reduction in family migration, elimination of the visa lottery and a pathway to citizenship for beneficiaries of the Deferred Action for Childhood Arrival program. That program deferred deportation for those so-called Dreamers, immigrants who were brought to this country illegally as children.

But conservatives in the House, like Gosar, have balked at a path to citizenship for Dreamers, which they said would reward their illegal entry into the country.

The latest version of the bill attempts to sweeten the pot with a new class of farmworker visa, dubbed H2-C, that would let agricultural workers stay in the U.S. for up to three years on one visa. Amendments proposed Tuesday called for as many as 450,000 of those visas.

The bill would also require that all employers in the U.S. use the E-Verify system to certify the citizenship of anyone they hire. E-Verify is a Department of Homeland Security database of people legally allowed to work in the U.S.

Even with the new additions to the legislation, however, Ryan did not sound confident Tuesday about the bill’s fate.

“We have a big conference with big, different views in districts,” Ryan said. “What we have here is the seeds of consensus that will be gotten to hopefully now, but if not later.”

Ryan downplayed the president’s call to give up on immigration reform for now.

“The president was communicating his frustration with the Senate, and that’s what some of our members communicated, the same frustration,” Ryan said. “We get something through the House and you’re still going to need at least nine Democrat votes to break filibuster.”

Before it can get to the Senate, however, the bill needs to pass the House. Democrats are dead-set against the Republican-backed measures. And the latest amendments may not be enough to placate GOP lawmakers and their concerns over the bill’s protections for Dreamers.

Arizona Rep. Debbie Lesko, R-Peoria, voted for the bill that failed last week, which was considered tougher than the current measure. She said after Tuesday’s caucus meeting that while she approved of the E-Verify amendment, she is still not sure how she will vote when the bill comes to the floor.

“I’m having some heartburn over the compromise bill because it gives a pathway to parents for citizenship,” Lesko said. She said she would “have to see if there’s any changes made” before committing to the bill.