PHOENIX – Sitting with Dana Zupke in the Pinnacle High football meeting room, surrounded by whiteboards, helmets and pictures of past teams, it’s easy to see the joy in the head coach’s eyes as he reflects on the moment he first noticed his quarterback in elementary school.

“I remember Spencer playing Boys and Girls Club basketball and just flying up and down the court and going ‘wow,’ ” said Zupke, who is about to start his 16th year at Pinnacle High School. “Already someone was like ‘Do you know who that is? That’s Spencer Rattler.’ It was already this thing.”

The Pinnacle star quarterback had Zupke’s attention at an early age on the basketball courts. By the time he first stepped foot in the halls of Pinnacle High, Rattler was already well known in the area.

“He’s been a known quantity for a long time, but I have to honestly say I still had no idea,” Zupke said. “I guess the best way to say it is he has absolutely lived up to all the hype that he had coming into school as a freshman.”

Rattler began playing football at 7. By the time he was 10 or 11, he was already garnering college attention. Now 17, he will kick off his senior season in August with an impressive national reputation.

In his first three seasons at Pinnacle, Rattler threw for more than 9,000 yards, tossed 93 touchdowns and threw only 30 interceptions. He was recently the top performer at the Elite 11 Finals in Los Angeles, widely regarded as the nation’s leading quarterback competition for high schoolers.

On one level, Spencer accepts the spotlight and enjoys media attention – he has well over 10,000 Twitter followers and has no shame promoting the University of Oklahoma, where he is committed to play football in 2019 – but as he fidgets in his seat, it’s easy to remember that in many ways, he’s still a 17-year-old kid.

“It really doesn’t get to my head anymore. When you start getting the attention, it kind of gets to your head but you have to let it go,” said Rattler, who Pinnacle lists at 6 feet, 2 inches and 185 pounds. “I’m really just a normal kid.”

“Talk to his parents. They are wonderful people and that’s part of the reason that he’s not out of control,” Zupke said. “I haven’t had to do too much to keep him grounded.”

Despite dozens of recruitment letters and national accolades, Rattler’s parents still make him take out the trash, clean up the backyard and make his bed. When school starts in August, he’ll be right there among the gossip that permeates high school hallways. 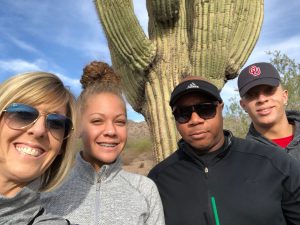 Rattler credits his strong bond with his parents and younger sister as a reason for keeping himself grounded. (Photo courtesy of the Rattler family)

“He’s still just that 17-year-old son to me,” said Susan Rattler, Spencer’s mother. “He eats dinner with us every night and I make him breakfast every morning.”

In a lot of ways, Spencer is a normal, naive, jubilant kid. But in so, so many ways, he has nothing in common with a standard high schooler.

At 14, Rattler was thrust into a starting role at Pinnacle. Zupke had no intention of starting his then-freshman quarterback, but the Pioneers’ incumbent starter quit the team during the summer.

“My first game we played Chandler. I definitely learned a lot in that game,” Rattler said, chuckling.

Rattler threw three interceptions, failed to score a touchdown and recorded only 133 yards in the air. His quarterback rating was 27.6. Pinnacle lost the game to Chandler, 56-10.

Regardless of the lopsided score, the game provided positive moments.

“While he didn’t have a good game, just to see his poise,” Zupke said. “Here’s a 14-year-old kid out on the field with 17- and 18-year-old men and he looked like he had been doing that his whole life.”

Rattler built on those learning moments. Shaking off the butterflies of his first career start, his next three games truly highlighted his potential under center.

“He just shredded them,” Zupke said about Rattler’s second career game against Saguaro. “That was the first of many jaw-dropping moments with Spencer.”

During that three-game stretch, he accounted for 798 yards and nine touchdowns without throwing a single interception. And three wins.

Rattler’s first high-level national exposure came in the first week of his sophomore season, an ESPN game against Basha. What most didn’t know about the 49-41 win in which Rattler threw for more than 300 yards and three touchdowns: He was playing with a broken throwing hand.

“Broken hand, broken foot, doesn’t matter. He wants to play. He’s not going to make any excuses,” said Mike Giovando, Rattler’s private quarterback coach who has worked with high-profile quarterbacks, including Colin Kaepernick and Tyrod Taylor. “If they would’ve lost that game, there wouldn’t have been no excuses. He doesn’t have excuses.”

Every season under Rattler, Pinnacle has improved. His freshman year, Pinnacle went 4-5. This past season, it was 9-4. Nineteen touchdowns, nine interceptions, and 2,300 yards as a freshman ballooned to 45 touchdowns (with only 11 interceptions) and nearly 4,000 yards as a junior. Through all the accolades, statistics and regular season wins, the team has yet to reach the third round of the state playoffs during Rattler’s tenure.

Most believe Rattler’s best trait is his pinpoint accuracy, an attribute many scouts and analysts say is among the most unteachable in football. He truly believes he can put the ball wherever he wants it on the field.

“It is uncanny,” Zupke said about his quarterback’s ball placement, a skill Rattler said he has worked hard to improve during his three years at Pinnacle. “When I compare him to every other quarterback we see out there, it’s how consistently he puts the ball in the exact spot it needs to be.”

Rattler committed to Oklahoma last summer during a bizarre time for the OU program. Coach Bob Stoops, who had been with the school since 1999, retired unexpectedly in June of 2017. Oklahoma stayed in house for Stoops’ replacement, hiring 33-year-old Lincoln Riley.

Riley, a former Texas Tech quarterback, had been at Oklahoma as an offensive coordinator and quarterbacks coach since 2015. Rattler committed to Oklahoma less than a month after Riley was named head coach.

“I was at USC visiting and (Riley) texted me saying he was going to be the head coach,” Rattler said. “I already told my dad before I visited USC that I wanted to go to Oklahoma.”

At the major college level, few head coaches do the bulk of the recruiting. They rarely have the time to bond with parents and travel the country watching high school sophomores. However, in Rattler’s case, Riley began recruiting Spencer as an assistant.

“They developed that relationship that head coaches can’t do at a college level normally,” Zupke said. “Here he has this really personal relationship with the head coach.”

This special connection gave Rattler the confidence to commit to Oklahoma and the Sooners’ novice head coach before ever seeing Riley coach a game in Norman.

“I could kind of read coaches, and you could tell how they are. Some are telling you lies right to your face,” Rattler said. “Really we just clicked right off the jump.”

Beyond relationships, there’s the fact that Oklahoma has a strong track record with quarterbacks. For nine of the last 11 seasons, OU’s starter has gone on to be drafted in the NFL.

“That offense, it’s just what he wants to do,” Zupke said about Riley’s system – a pro-style spread which emphasises spreading the field horizontally and vertically. “(Spencer) wants to ride, fake zone, and then punch it deep. He’ll do that 50 times a game if coach gave him the opportunity.” 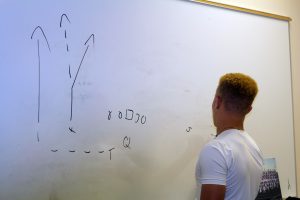 Rattler loves going deep. When asked about his favorite play, it’s simple. “I like four verts,” Rattler said, stepping to the whiteboard to draw three variations of the vertical plays they run at Pinnacle, plays that challenge a defense’s secondary by sending four receivers deep.

Rattler says Pinnacle has even incorporated some plays from Riley’s Oklahoma playbook.

With Rattler heading to Norman in a year, it’s easy to compare him to Baker Mayfield, Oklahoma’s starting quarterback for the previous three years and the first pick in the 2018 NFL Draft. Like Mayfield, Rattler’s stature is far from physically imposing in person – both are right around 6-feet-1, undersized for a prototypical quarterback, and both rely on their accuracy at all levels of the field.

“I like his confidence. I feel like we kind of play the same,” Rattler said. “I’m a little more athletic than him, but he’s a great player. I’d say he’s the best quarterback out of college I know.”

Although Rattler has met Mayfield during a trip to Norman, he later had to pass on an additional opportunity to spend time with the soon-to-be Heisman winner because of previous obligations.

Want to talk about confidence? Imagine passing on an opportunity to hang out with the Heisman winner, before saying you play the same way as him except that you’re “‘a little more athletic.”

“(Rattler’s) a very confident young man and that’s a big reason why he’s good,” Zupke said. “Because he knows he’s good. But he has all the physical tools to back that up.” 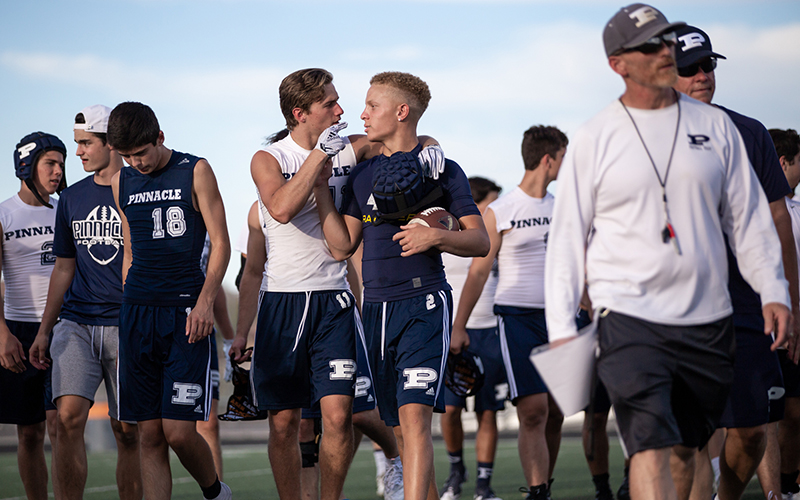 Rattler lists starting as a true freshman at Oklahoma among his goals — something that hasn’t happened at quarterback for OU since 1990. Although Rattler is not going to enroll early, Giovando plans to go to Norman and meet with Riley after the Sooners’ season to get into their playbook.

“Our main focus is for him to have a great senior year, go tear it up this year and hopefully have an opportunity to go get that state title,” Giovando said. “Come January that’s when we’re going to start getting Spencer ready for Oklahoma.”

Through all the accolades and media attention, Pinnacle has never been past the second round of the Arizona state playoffs with Rattler under center. With Rattler exclusively playing football this season, his focus remains winning the state title, and secondarily the Gatorade Player of the Year.

With eyes from Phoenix to Norman looking forward to watching Rattler as he takes the field for the Pinnacle opener in August vs. 6A runner-up Perry, he’s certainly come a long way from the days of Boys and Girls Club basketball.