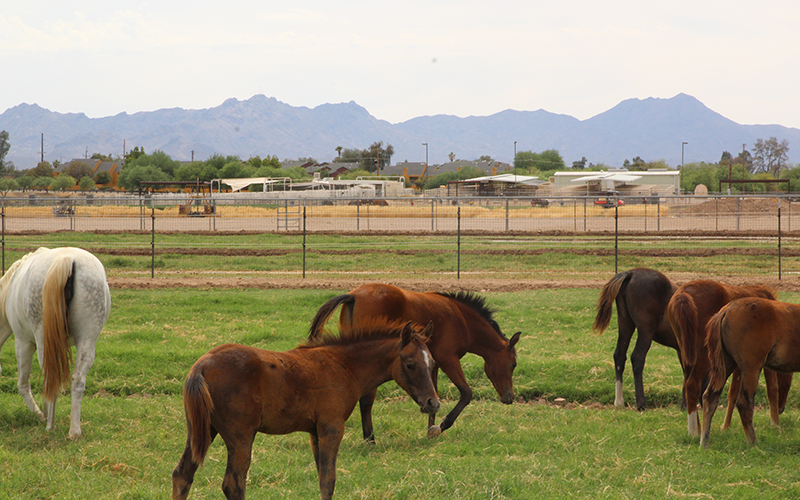 Students in the Race Track Industry Program work hands-on with the horses at the University of Arizona’s Equine Center. (Photo by Margaret Naczek/Cronkite News) 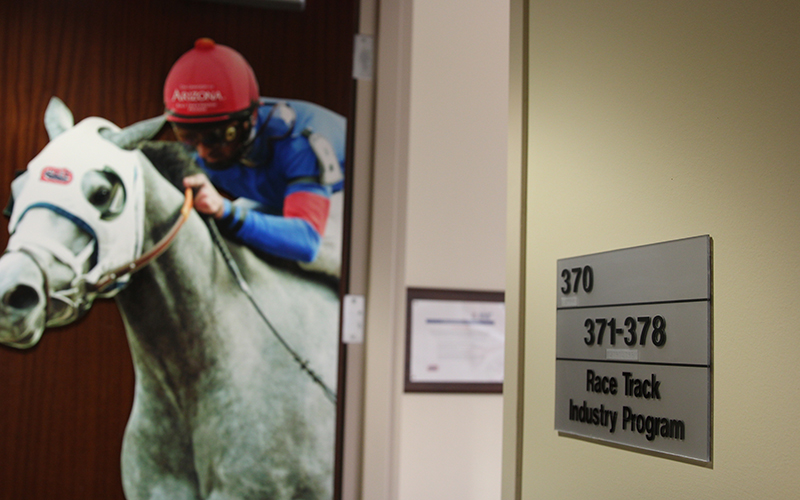 The RTIP program features two tracks, one focusing on the business side of horse racing and one focusing on direct equine relations, including breeding and training. (Photo by Margaret Naczek/Cronkite News)

Justify, with Mike Smith in the stirrups, wins the Belmont Stakes and the second Triple Crown for trainer Bob Baffert at Belmont Park Racetrack in New York in June. (Photo by Getty Images)

TUCSON – Zach Taylor grew up around horses. His mother owned trail horses when Taylor was a boy in Fayetteville, Arkansas.

But his love for racing took off while working in the electrical supply industry. He would take his customers to Oaklawn Park in Hot Springs for a weekend at the races. 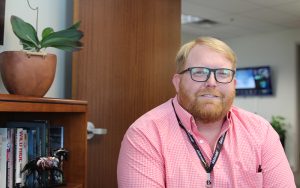 Zach Taylor is one of 23 students in the 2017-18 RTIP program, which includes students from as far away as China. (Photo by Margaret Naczek/Cronkite News)

Taylor is one of 23 students at the University of Arizona’s Race Track Industry Program (RTIP), a program that has attracted national attention for producing such alumni as top trainers Bob Baffert and Todd Pletcher. It is the only collegiate program in the United States focused solely on the racetrack industry.

Students receive a four-year bachelor of science degree in the College of Agriculture and Life Sciences. The program is fairly small, with usually 30 to 40 students a year. During the 2017-18 school year, RTIP graduated 12 students, said program director Wendy Davis, who graduated from RTIP in 1981.

Students came from as close as Tucson to as far as China in the 2017-2018 academic year.

“It really is a melting pot from all over the country here,” Taylor said.

The industry hopes the success of Baffert, whose Justify helped the trainer win his second Triple Crown in four years on June 9, will be a boost for the program and the sport in general. A 2016 Harris Poll found only 1 percent of Americans listed horse racing as their favorite sport, down from 4 percent in 1985.

For Abel Zander, a trip to Arlington Park in the Chicago area increased his love for the sport. The Chicagoan bet on a 3-year-old stallion with 70-to-1 odds in the Belmont Stakes. That horse – Sarava – went on to win the race and end War Emblem’s run for the Triple Crown.

“I don’t think coming in I realized how much goes into the sport from all aspects, putting together races and then even running a barn,” Zander said. “There’s so many different moving parts, but they all come together, and for me, it’s been a real eye-opener.”

“There are really two different types of students who come here,” Davis said. “One is the kind who wants to be a Bob Baffert or a Todd Pletcher. They want to be hands-on with the horses. Then there’s also the other side who loves racing for the sport. They love the game.” 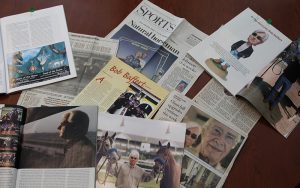 One of the most notable alumnus of RTIP is Bob Baffert, who won his second Triple Crown as a trainer in 2018 with Justify. (Photo by Margaret Naczek/Cronkite News)

“I think that’s one of the reasons that our graduates do so well is they haven’t grown up in either the horse side or the business side with no understanding of the model of basically their partners,” Davis said.

Despite his focus, Taylor has taken several courses on the equine side, such as Equine Form and Function.

“Even though they are separate paths, you can’t have one without the other,” Taylor said. “My interests in the overall sport led me to take that class because I want to be able to look at a horse and have some sort of understanding about how it’s put together and how it might affect the performance.”

Graduates have landed careers all over the globe.

Evan Arkwright works as the commercial manager at the Curragh Racecourse in Ireland, the best-known track in that country, Davis said. Jim Kostas is the president of the Daily Racing Form, the industry’s top provider of data and editorial coverage, and Jim Mulvihill is the director of media and industry relations at the National Thoroughbred Racing Association.

The small program size and faculty of just three professors and an administrative specialist who handles public relations and graphic design makes for a close-knit community. Davis believes the main success of RTIP is the networking opportunities. 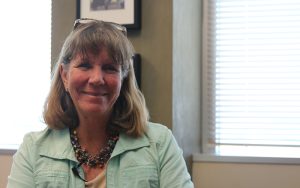 Wendy Davis, director of the University of Arizona’s Race Track Industry Program since 2017, was a 1981 graduate of the program. (Photo by Margaret Naczek)

Opportunities presented is what Taylor said best describes the program.

“You can just walk up to a wall of doors that are open for you when you come in here and just pick which one you want to go through,” he said.

The culmination of the four-year program is a required internship within the race track industry at locations including Churchill Downs, the American Quarter Horse Association, New York Racing Association and Santa Anita Park.

Students also get to network with alumni and industry leaders in guest lectures and at the annual Global Symposium on Racing.

Frank Vessels Jr., the founder of Los Alamitos Race Course in Southern California, and horseman Jack Goodman were part of the group that campaigned for a racing industry program in Arizona. It started in 1973 with a mission to “become future leaders in the racing industry,” according to RTIP’s 2017 “Year in Review.”

“They came together seeing the need for educated people to come into racing because racing was getting a lot more complicated in those days,” Davis said. “It was growing, and it really needed to have people who understood not just the horse side but also the business side and the regulatory side to keep it moving forward.”

It grew into something nationally recognized in the industry.

“It’s great that we get the light shined on southern Arizona because of the program,” Taylor said.

“One of the things that has become very clear is that you don’t have to be born in one of the hubs of horse racing,” Davis said. “We find that people who have been very, very successful come from sometimes the most unlikely places such as Bob Baffert and Nogales, Arizona.”