Immigration reform stalls in House, as GOP-backed plan is shot down 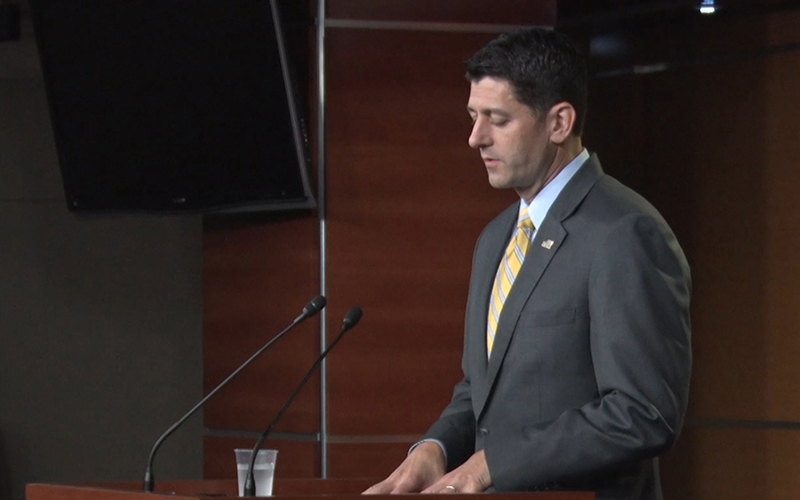 After weeks of negotiating to set up vote on a pair of immigration reform measures, House Speaker Paul Ryan saw the first bill defeated, in part with opposition from his own party members, before pulling the second. (Photo by Pat Poblete/Cronkite News)

WASHINGTON – Some conservative House Republicans bucked their party’s leaders Thursday and joined Democrats to kill a GOP-backed immigration reform bill, dimming chances that any reform bill will pass the House.

After the Securing America’s Future Act failed on a 193-231 vote, House leaders quickly pulled back a second, more-moderate measure and called a late afternoon meeting with members of their caucus.

A vote on the second, so-called compromise, bill could come Friday but some members leaving the caucus meeting Thursday told reporters that they think it will take longer to reach any sort of agreement.

Both the first bill, sponsored by Rep. Bob Goodlatte, R-Virginia, and the compromise bill met the “four pillars” that President Donald Trump has said must be included in any immigration reform bill for him to sign it.

Those include increasing border security, cutting the diversity visa lottery, ending family reunification-based migration and extending protections for some recipients DACA, the program that deferred deportation of young immigrants who were brought this country illegally as children.

Democrats saw the Goodlatte bill as too harsh, and all 190 voted against it Thursday, drawing charges from Trump that they “say no to everything. They’re obstructionists.”

But the fatal blow to the Goodlatte bill came from 41 Republicans – including two from Arizona. Many of the Republicans, including some members of the conservative Freedom Caucus, were apparently upset that the bill included protection for DACA recipients.

“Enacting amnesty in 1986 didn’t result in increased border security or any of the other enforcement promises made when leg (legislation) was enacted that gave amnesty to 2.7M (million) people,” said Rep. Paul Gosar, R-Prescott, in a tweet Thursday evening.

“I oppose amnesty in all forms & will continue to fight & vote against any legislation that includes amnesty,” said Gosar, who was joined by Rep. Andy Biggs, R-Gilbert, in voting against the bill.

The other Republican members of Arizona’s House delegation – Martha McSally of Tucson, Debbie Lesko of Peoria and David Schweikert of Fountain Hills – were among the 99 co-sponsors of the bill and all voted for it Thursday.

“I strongly support passage of this legislation as the first significant proposal to solve these very serious issues that continue to impact communities in Arizona and the rest of the country,” McSally said during the hours of floor debate on the bill.

Lesko, called the Goodlatte bill “vital legislation for the state of Arizona.”

“My constituents back home know all too well how desperately we need our border secured,”ÿshe said on the House floor.

Thursday’s vote should have been a victory for Republicans, who last week agreed to take up the two measures. That agreement headed off a bipartisan maneuver, a so-called “discharge petition,” that would have forced a series of votes on four bills, from both sides of the aisle.

That petition was two signatures shy of the 218 needed to force a vote when House Speaker Paul Ryan convinced moderates members to go along with the two GOP-backed bills instead. But even before the first vote Thursday, Ryan did not sound optimistic about the chances that either of the bills could pass.

“Our goal was to prevent a discharge petition,” Ryan said in a morning news conference. “But a lot of our members want to be able to express themselves by voting for the policies which they like, so that they can express their votes on the floor.”

Ryan noted that even if the House can pass a bill that is acceptable to the president, it still has to get through the Senate, where Democrats are sure to have the 41 votes to extend debate and talk the bill to death. And even some Republicans have expressed reservations about the House bills.

“Even if we get something out of here, you need nine (Senate) Democrats to stop trying to stop things … and I don’t see that happening,” Ryan said.