A coalition of sportsmen’s groups stepped into the debate over uranium mining near the Grand Canyon, launching a campaign to stop the Trump administration from reopening the area to mining. (Photo courtesy Protect Your Canyon) 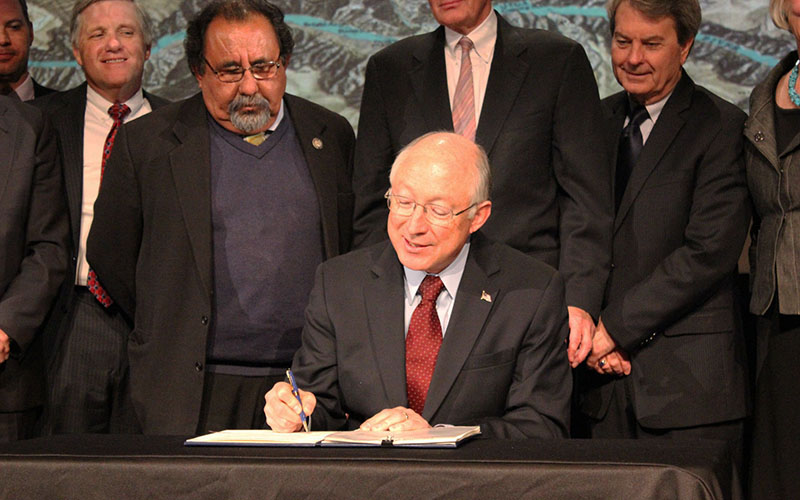 Then-Secretary of the Interior Ken Salazar in 2012 signs the order that removed more than 1 million acres of federal land near the Grand Canyon from new hardrock mining claims for 20 years. (Photo by Salvador Rodriquez/Cronkite News)

WASHINGTON – Arizona wildlife groups launched a campaign Monday to block what they fear is a Trump administration effort to reopen 1 million acres around the Grand Canyon to uranium mining, saying the environmental risks are too great.

The campaign by Trout Unlimited and the Arizona Wildlife Federation includes billboards along interstate highways in the Phoenix area that call on Interior Secretary Ryan Zinke to “save the Grand Canyon from uranium mining.”

“The crux of the issue boils down to risk versus reward, and the risk is just too great,” said Scott Garlid, conservation director for the Arizona Wildlife Federation. “And the reward is very, very small.

“We hope ultimately that they (the federal government) will decide to keep the withdrawal in place. That’s what we’re really after,” Garlid said.

Mining in Grand Canyon National Park is already prohibited, but in 2012 the Interior secretary at the time, Ken Salazar, imposed a 20-year moratorium – a “withdrawal” – on mining on 1 million acres of federal land around the park.

But advocates fear that the Trump administration is moving toward reopening the area to mining, pointing to a finding earlier this year by the U.S. Geological Survey that uranium is one of 35 minerals of critical importance to U.S. economic and national security.

That followed President Donald Trump’s executive order in December directing agencies to identify minerals that have “an essential function” in products important to “our economy or our national security,” and to reduce the nation’s vulnerability to disruptions in their supply. The agencies were to report on ways to increase U.S. reliance on and recycling of those minerals, but also on ways to expand exploration and streamline permitting and review processes for mines.

One advocate said mining would have “very little” environmental impact, and he welcomed the possibility that Salazar’s moratorium could be rolled back.

Greg Yount, the manager and owner of the Northern Arizona Uranium Project, said uranium moves naturally through the environment and that those who claim mining will lead to pollution are being “extremely alarmist” and disingenuous.

“When the environmentalists say, ‘Oh well, this mining can pollute the Grand Canyon,’ … it’s like they totally ignore that this is a natural process that’s already happening at a scale that dwarfs what mining would do,” Yount said.

He said uranium mining is a very directed process. Unlike fracking for oil and gas in Appalachia, he said, the uranium mines around the Grand Canyon drill straight down as opposed to down and out.

“Exploration that would happen out there is very targeted,” Yount said, of the impact sportsmen might see. “In any given season, there might be a few rigs drilling out there, but it shouldn’t really affect their hunting.”

But environmentalists are not as convinced of the safety of uranium mining as Yount, noting that one reason for the moratorium was to further study the “fractured geology” of the lands around the Grand Canyon.

“A lot of this (effects of uranium mining) are unknown,” said Brad Powell, Southwest director for Trout Unlimited. “We needed better science, which was supposed to be done in these 20 years…. We’re not asking for anything new.”

And opponents say uranium mining doesn’t have a great track record in the region. Powell said past uranium mining in northern Arizona has had a devastating impact on the region, including fish and wildlife pollution and elevated levels of radiation in the area, which has led to water contamination and health issues, particularly on the Navajo Nation.

“It’s high risk with little benefits,” Powell said. “People come from across the world to see the Grand Canyon, not a uranium mine.”