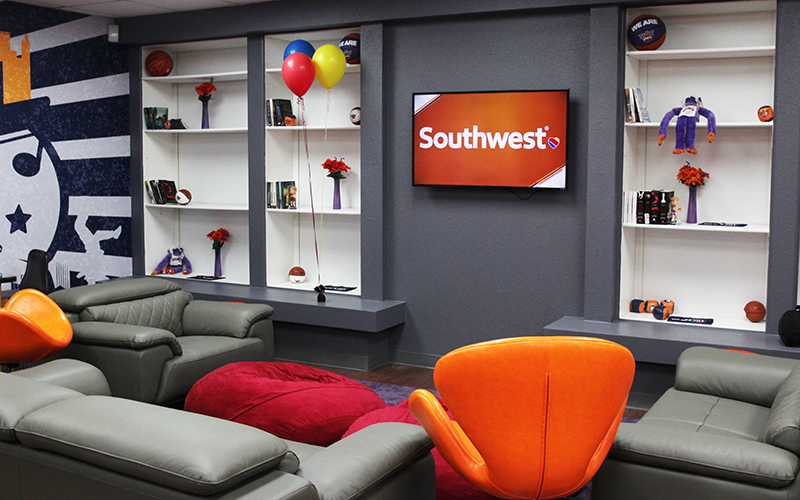 The new teen center at the I.G. Homes branch of the Boys & Girls Clubs of Metro Phoenix provides a comfortable setting for video gaming. A recent study by the American Academy of Pediatrics said exposure to digital technologies and media can have positive effects on teenagers. (Photo by Nate Fain/Cronkite News)

PHOENIX – The teenage members of a central Phoenix Boys & Girls Club noticed quite an upgrade to their hangout spot as they followed the Suns Gorilla and Interim Mayor Thelda Williams through the entrance of the new teen center.

The old, ratty carpet had been replaced by smooth hardwood, the worn-out couch tossed in favor of new furniture. The dark red and blue paint on the walls had been covered by vivid, Suns-colored murals.

But beyond the aesthetic changes, significant improvements were made to the technology in the teen center that the members will be able to use at the I.G. Homes branch of the Boys & Girls Clubs of Metro Phoenix, including a new Wi-Fi router (exclusively for the teens), flat-screen televisions and a collection of some of the newest video game consoles: an Xbox One, PlayStation 4 and Nintendo Wii U.

Open since the 1950s, the I.G. Homes club hosts kids from the Phoenix Elementary School District No. 1 and the Murphy Elementary District. Southwest Airlines made this technology renovation possible by giving a $20,000 grant to the Phoenix Suns, who then picked the spot for the project, based on economic need.

A 2016 report from the American Academy of Pediatrics said exposure to digital technologies and media can have positive effects on teenagers. The report references several studies, suggesting that moderate use of digital technologies, such as video games, social media platforms and the internet increase school-aged children’s tolerance for other cultures, and their desire to collaborate.

Dr. Yolanda Reid Chassiakos, a professor of pediatrics at UCLA, co-authored the report. Although Chassiakos said that the overuse of digital media can present health concerns, her research also shows that using digital technology in a communal, interactive way can be good for the development of adolescents.

“If we see technology as a tool that’s used as any other tool, then there can be benefits and value,” Chassiakos said. “It’s helpful to have mentors who can help teens process what they’re seeing and what they’re engaged in, and also be facilitators for teen-to-teen communication.”

The upgrade is aimed to increase enthusiasm among teens about the club and give them the technology they need to have fun in collaborative and creative ways.

The Boys & Girls Clubs put a high priority on teaching members to be innovative, creative users of technology.

According to the organization’s annual report, 12th-grade club members are more than twice as likely to express an interest in a science, technology, engineering or mathematics (STEM) career than 12th-graders nationally.

The club is the only place Venancio Felix, 13, goes after school. 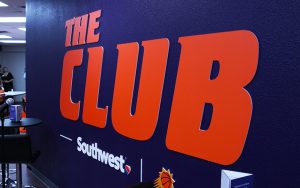 Southwest Airlines gave $20,000 to the Suns, who chose a location for the project. (Photo by Nate Fain/Cronkite News)

“I really like it here and make a lot of friends,” Felix said. “But it looked really old when I came here … looks good now. First thing I did was jump on the new couches.”

Felix has been a member at the I.G. Homes club for two years. Soon he’ll start high school, where temptations and peer pressure will increase.

The hope is that the renovation will keep older members, like Felix, in the program longer, said Stephen Wolschlag who is the teen specialist at this Boys & Girls Club.

“They seem so much more engaged now that we have this (renovation),” Wolschlag said. “That’s good because it’s usually around the teenage years when kids stop coming in.”

Also new to the club is a new projector (for Jeopardy game nights), dry-erase tabletops, a pool table, a foosball table and an air-hockey table.

Soon, there will be a multi-purpose, soundproof recording and editing studio in the back of the facility.

“We’ve got a really artistic group of kids and we want to give them an environment where they can express themselves,” Wolschlag said.

Members of the Suns organization attended an opening ceremony for the teen center recently, including team president Jason Rowley and center Alan Williams.

Before he made it to the NBA, Williams, a Phoenix native, was a member of the Boys & Girls Clubs when he was a kid.

“It gave me something to do after school,” Williams said. “For troubled kids, at some point, you’ve got to choose between something positive and negative. And for me, that positive thing was the Boys & Girls Club.”

Williams stayed after the ceremony to hang out with them and test out some of the new equipment.

“I called first game (at air hockey), but somebody cut me in line, that’s fine,” Williams said. “I saw they’ve got an Xbox and PlayStation, so that’s great. It’d be even cooler to watch some Suns games on that big TV.”