It revealed an opportunity to change the fortunes of a franchise.

The Phoenix Suns held a private workout Wednesday with the former University of Arizona center, one of a small handful of players in consideration for the top pick in the upcoming NBA Draft.

“It’s a big day for the franchise in terms of having the No. 1 pick and working out Deandre Ayton for the No. 1 pick,” Suns General Manager Ryan McDonough said.

The mood in the building was noticeably different than previous workouts this season. Nearly twice as many media members were in attendance, gathered in the Al McCoy Media Center to talk to Ayton rather than the typical hallway huddle.

For the Suns, drafting No. 1 isn’t just a novelty – this is the first time they have the top pick and the first time in the top three since 1987 – it’s an opportunity to capitalize on the future of basketball in Phoenix.

The Suns are the oldest NBA franchise to have never won a championship. In 1969, they lost a coin flip that would have awarded them the first pick in the draft and future Hall of Famer Lew Alcindor (now Kareem Abdul-Jabbar). They have missed the playoffs the last eight seasons, after advancing 19 of the previous 22.

The recent lack of success has proved costly.

For the 2017-2018 season, Phoenix ranked 23rd of 30 NBA teams in attendance. The highest they’ve finished in attendance over the past seven seasons is 19th. Despite residing in the fifth largest city in the country, according to the U.S. Census Bureau, the Suns are only the NBA’s 17th most valuable franchise, $1.28 billion, Forbes reported.

The Suns staff are hoping the opportunity to select first will raise the bar. 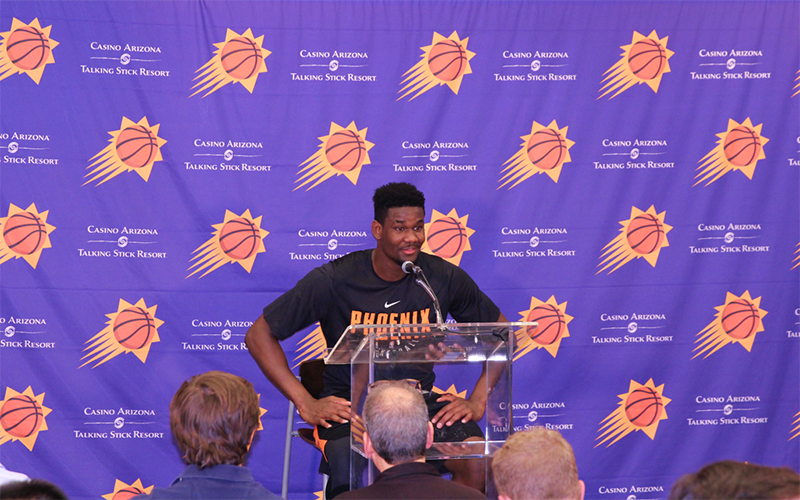 Former Arizona big man Deandre Ayton speaks to media after his pre-draft workout with the Phoenix Suns. Ayton will not be working out for any additional teams. (Photo by Nathanael Gabler/Cronkite News)

“If you have the No. 1 pick, that gives a different level of excitement, different level of expectation both internally and externally, whether that’s the front office, our sales staff, people doing our community relations, really anyone in the building is extremely excited about it,” Rowley said.

The Suns estimated that they had approximately 1,000 people show up for their draft lottery party last year. This year, nearly 4,000 came. The team is expecting as many as 15,000 in the building for the upcoming draft party on June 21.

Ayton, who averaged 20.1 points and 11.6 rebounds in one season at Arizona, hopes to hear his name first.

“Most of my family is already here in Phoenix. We made this home as soon as I came here in high school,” Ayton said. “It would be a blessing if I become the No. 1 pick and stay here and make this home.”

Ayton has been in the Suns’ backyard for years.

Born and raised in the Bahamas, Ayton moved to San Diego in seventh grade. He would later move to Phoenix where he played his final two years of high school ball at Hillcrest Prep before enrolling at Arizona.

“He’s got a lot of strong ties to this area, obviously playing at the U of A and having his mother live in the Valley,” McDonough said. “Obviously, we watched him closely at Arizona and scouted him heavily in person, in games, in practice, and on film.”

Ayton was dominant at Hillcrest. He was the top-ranked center and third-best high school recruit in the class of 2017, according to Rivals, before committing to Arizona in September of 2016.

For one year at Hillcrest, Ayton actually played alongside former Duke forward – and another possibility for Phoenix at No. 1 – Marvin Bagley III. Between Bagley and his Arizona teammates, Allonzo Trier and Rawle Alkins, Ayton has played with NBA-like talent, but the possibility of playing alongside Phoenix’s Devin Booker is something that excites Ayton.

“That’s Shaq and Kobe 2.0. That’s big. We can really make something happen in Phoenix,” Ayton said.

To the Suns, this is about more than just drafting a basketball player.

It’s an opportunity to change the fortunes of a franchise.