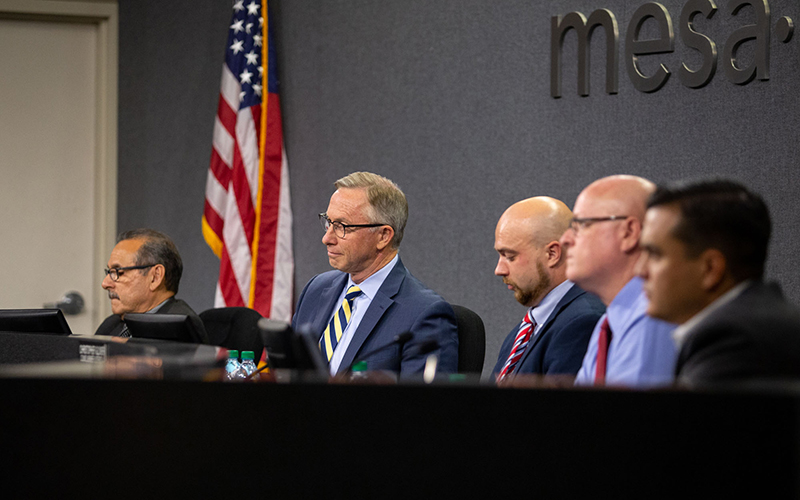 Mayor John Giles, center, listens to public comments about an ASU campus that will be built in downtown Mesa. (Photo by Ellen O’Brien/Cronkite News)

MESA – The City Council has approved a $65 million deal to bring an Arizona State University campus to downtown Mesa, a move some business owners and residents lauded as an economic boon and a few residents worried would bring higher taxes.

Nearly 30 people spoke in support of the project at the Monday night council meeting, with about a dozen expressing opposition.

Jane Dafoe, who has lived in Mesa for 32 years, said she wasn’t opposed to the university coming downtown but doesn’t want taxpayers to finance it. Mesa voters defeated an earlier proposal that would have increased sales taxes to pay for the campus.

“I’m not against education, I’m for education,” Dafoe said. “But not on the backs of people who have voted against the project.”

Under the deal approved 5-2 on Monday, Mesa will build a new 100,000-square-foot building to house elements of the ASU film program and a new technology program financed by utilities revenues. When opened in three years, it is expected to draw about 750 students, a sliver of the university’s enrollment but what downtown business owners hailed as an economic boon.

John Linton, owner of Linton-Milano music, which has been in business downtown since 1946, said the school will bring a more youthful and vibrant crowd to a downtown known for its vintage charm and family-owned businesses that go back generations.

“I know what it did for downtown Phoenix, and I think it will do the same thing here in Mesa,” Linton said.

ASU’s main campus is in Tempe, but its expansion more than a decade ago to downtown Phoenix jumpstarted retail and housing development. ASU also has campuses in the West Valley, Lake Havasu and the Polytechnic campus in south Mesa.

Before the vote, residents and council members debated the merits of the deal for almost two hours.

Nick Huntington, who has owned the bakery Sweet Cakes since 2014, became emotional talking about the impact that a satellite campus would have on his business.

“Ultimately what I’m looking for is more people downtown,” Huntington said. “It’s really important for me to know that the council will vote for this.”

Mesa residents who opposed the project voiced concerns that the deal was being forced through against the will of voters, and that Mesa residents would have to subsidize the construction with higher sales taxes or utility rate increases. 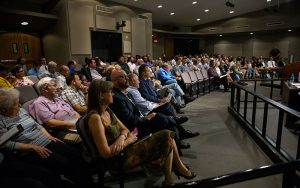 Mesa residents fill the city council chambers during a discussion on a deal to bring ASU to downtown Mesa. The $65 million deal was debated for about two hours before the council approved the project 5-2. (Photo by Ellen O’Brien/Cronkite News)

Opponents referred to a 2016 ballot measure that would have raised sales taxes to fund a similar downtown Mesa expansion for ASU, among other things. Fifty-three percent of residents voted against the tax hike.

Unlike the previous proposal, the project approved Monday will be funded from the city’s enterprise fund, which is drawn from utilities revenues.

Giles, a Mesa native, said he has fond memories of taking walks with his family through the old streets near downtown. A new campus, slated to open in 2021, will recharge downtown, where many buildings and amenities are underused or neglected.

Giles said the city owns the land, near Mesa City Hall, and looks at the project as a worthwhile investment.

“We’re spending money, but this is a great opportunity to make money,” Giles said. “It’s not going to be a drain on our finances, just the contrary.”

An ASU statement said the campus’ proximity to Boeing will mean students studying media and technology will have access to more professional opportunities.

Next steps are to work with Mesa officials on the building’s design and construction and design academic programming.