Scott Cohen practices at the Pointe Tapatio Lookout Mountain Golf Club, one of two private courses that have partnered with Phoenix to wean themselves off potable water for irrigation. (Photo by Ellen O’Brien/Cronkite News)

PHOENIX – In parts of northern Arizona, golf courses over the past decade have stopped using drinking water to keep their greens vibrant. Instead, they use effluent or recycled water.

One local official says it’s critical to rethink the use of water – especially given Arizona’s $3.9 billion dollar golf industry.

“It’s important just from a perspective of living in the desert that we really value our water, and we use it for the correct purposes,” said Phoenix Councilwoman Debra Stark, who has worked to get golf courses to stop using drinking water.

In 2015, the Environmental Protection Agency placed 70 percent of Arizona under moderate to severe drought conditions, and the state is in its 21st year of long-term drought, according to the Arizona State Climate Office.

Yet nearly three-quarters of the water used for all Arizona golf courses is pumped from the same sources as drinking water, according to the Arizona Department of Water Resources’ most recent reports from 2016.

Although golf courses in the state’s five active management areas get water from a variety of sources, Arizona as a whole still relies heavily on groundwater needed for drinking and other uses by residents, state officials said.

“Groundwater is about 48 percent,” said Jeff Tannler, active management director for the Arizona Department of Water Resources. “Central Arizona Project water, which comes from the Colorado River, is 14 percent, and then surface water is 10 percent. … Of the total golf course use, 28 percent of that is effluent.”

In Prescott and elsewhere, many golf courses now use water not suitable for drinking – or set up a recycling system to reuse local effluent to keep their grass green without diverting potable drinking water resources, Phoenix officials said.

Financial considerations may prod some Phoenix courses to look for new water sources. For example, Moon Valley Country Club and Pointe Tapatio Lookout Mountain Golf Club have been using drinking water since their respective openings: Moon Valley in the early 1960s and Lookout Mountain in 1989.

But a few years ago, Moon Valley found itself on the verge of bankruptcy because of the cost of watering its golf courses.

After new owners took control of the club, they reached out to Phoenix officials and private construction management firms for a way to keep the course going, without diverting drinking water needed by Phoenix residents.

“From a cost perspective, water was one of their biggest costs that they had as a golf course operator,” said Ron Hilgart, the managing principal of HILGARTWILSON, a land-planning, engineering, construction management and surveying firm working with Moon Valley.

“As we tried to evaluate different options, Lookout Mountain Golf Club came along and said that they would also have interest in finding a solution.”

With two privately owned Phoenix courses on board, the group went to the city to propose a development agreement, deferring the cost of water bills while constructing a pipeline to pull raw water from the Arizona Canal.

When contacted, superintendents from both Moon Valley and Lookout Mountain clubs said they could not discuss the construction plans for the pipeline or water use issues.

Stark, the councilwoman, said she saw environmental benefit to get these private courses to stop using drinking water – and incorporate a public course into the plan to develop a sustainable system. Stark proposed granting rights for the publicly owned Cave Creek Golf Course, watered by mostly well water, to use the pipeline as a backup source.

“We ended up meeting with (the courses), and we devised a development agreement that had to be approved by the mayor and the council,” Stark said.

The development agreement included a cost-sharing plan for the three golf courses. Tom McDonald, an attorney at Gammage & Burnham working with Moon Valley, said the two private courses will pay the majority of the costs because both are farther away from the pipeline’s source. Cave Creek and Phoenix will shoulder a smaller amount. No exact dollar amounts have been set but Hilgart estimated the construction costs at $9.5 million.

“There’s an allocation between the three parties based upon usage by the courses and the length of line to their course,” McDonald said. “(Phoenix) is paying about one-third of the cost to get the line to Cave Creek.” 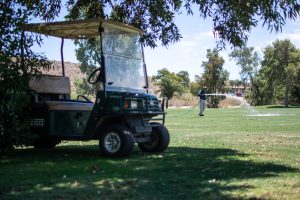 In Phoenix, less than a quarter of the water used on golf courses is reclaimed wastewater. (Photo by Ellen O’Brien/Cronkite News)

The pipeline construction will start near Dunlap and 25th avenues, with a large pumping station pulling water out of the Arizona Canal and carrying it 6 miles to Lookout Mountain. Hilgart, the land surveyor, said the pipeline will run through the nearby park system and residential neighborhoods before reaching Thunderbird Road and Coral Gables Drive. From there, the pipeline will run along Thunderbird Road all the way to Lookout Mountain, about a mile east of Seventh Street.

Hilgert said construction of the pipeline should be completed by the end of 2018, and the pumping station will be finished in March of next year.

Non-potable water costs 40 percent less than drinkable water, so the courses stand to benefit over time.

The five AMAs are Prescott, Phoenix, Pinal, Tucson and Santa Cruz. All rely heavily on groundwater overseen by the Arizona Department of Water Resources.

By state law, Hilgart said, golf courses are limited to about 90 acres of turf if they rely on groundwater, but “During peak hot weather months, (a course) could be using a million gallons a day.”

EPA research shows groundwater, CAP water and surface water are considered drinkable – but effluent, or reclaimed wastewater, can be reused to water golf courses with the right infrastructure.

“A lot of other parts of the Valley, like north Scottsdale, are not on potable water,” Hilgart said. “A lot of them are in fact on treated effluent wastewater.”

The infrastructure for that alternative can be expensive, especially if no wastewater treatment plant or other source of effluent is nearby. That’s the financial squeeze faced by Moon Valley and Lookout Mountain.

Industrial planner Ryan Jackisch, who’s in charge or managing turf-related facilities within the state’s five AMAs, oversees about 240 golf courses. He said the industry appears to be very receptive to finding a solution for Arizona’s water problem.

“Golf courses do a fantastic job at reporting,” Jackisch said. “The majority of superintendents working with theses golf courses, they would like to use effluent. They understand that using a renewable source, it’s good for everybody including public relations.”

Still, the Arizona Department of Water Resources only receives reported figures from those 240 golf courses within the five active management areas. The rest of Arizona imposes no measuring and reporting requirements.

And there’s a grandfather clause. Stark said golf courses operating before the 90-acre turf limit was imposed don’t have to comply with statewide requirements.

Arizona will have to allow some golf courses, with no reporting requirements, to continue using drinking water regardless of environmental repercussions – unless, as in the case of Moon Valley, course owners become so financially strained that they’re forced find a way to transport non-potable water to maintain the courses.

Still, those involved in the public/private partnership between Moon Valley, Lookout Mountain and Phoenix believe the agreement could provide a blueprint for changing the industry’s water use in Phoenix.

“Finding the solution can be difficult depending on the location, but that’s definitely what the trend is,” said McDonald, the water-use attorney.

CORRECTION: An earlier version of this story incorrectly stated the construction cost for the pipeline. The estimated cost is $9.5 million. The story has been updated to reflect the correct information. Clients who used earlier versions are asked to run the correction that can be found here.