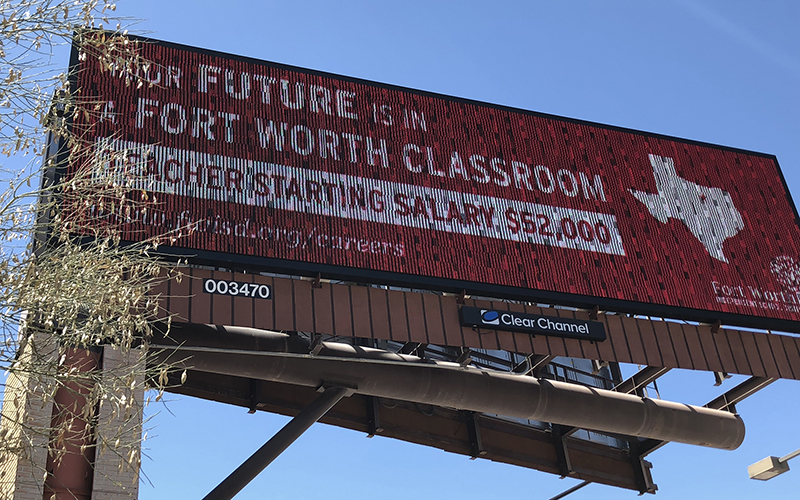 There’s nothing subtle about the billboards that popped up around Phoenix this week, with a Fort Worth school district luring teachers to Texas with starting pay well above what Arizona teachers make. (Photo by Kayla Koch/Cronkite News)

WASHINGTON – State educators said they were not surprised to see a Texas school district erecting billboards around Phoenix in hopes of luring underpaid Arizona teachers away – and said they wouldn’t be surprised if the effort is successful.

There is nothing subtle about the five billboards that the Fort Worth Independent School District put up this week. They tell Arizona teachers their “future is in a Fort Worth classroom” and promise a starting salary of $52,000 – well above the pay that even seasoned Arizona teachers can expect.

“Other states are paying attention Arizona and the teacher crisis, and I heard Fort Worth say that they were very impressed with the passion of our teachers for standing up for education and for their students,” said Heidi Vega, communications director for the Arizona School Boards Association.

Thousands of Arizona teachers walked out of their classes this spring to join thousands more protesters in #RedForEd rallies against low teacher pay and per-pupil school spending that is among the lowest in the nation.

Arizona was not the only state targeted by the Fort Worth school district. It also put up similar billboards up in Oklahoma, another state where teachers staged protests this spring over low pay and school support.

But a spokesman for the Fort Worth district said it was not a coincidence that the Arizona billboards went up in Phoenix: Fort Worth Superintendent Kent Scribner ran the Phoenix Union High School District for 13 years before he moved to Texas.

“When Phoenix came along, our current superintendent … was well-prepared and knowledgeable of the Phoenix area,” said Clint Bond, the Fort Worth spokesman. “He suggested, ‘Let’s do Phoenix … because I know the type of teacher there, and the type of teacher I’m talking about is one who is committed, who has passion, is dedicated to fighting for their profession and the education of students.'”

The bright-red Phoenix billboards went up Monday and will be up for a month, at a cost of $10,000 to the Texas schools. The district spent three times as much for a month of billboards in Oklahoma, a neighboring state, but those have already paid off in hires for Fort Worth. 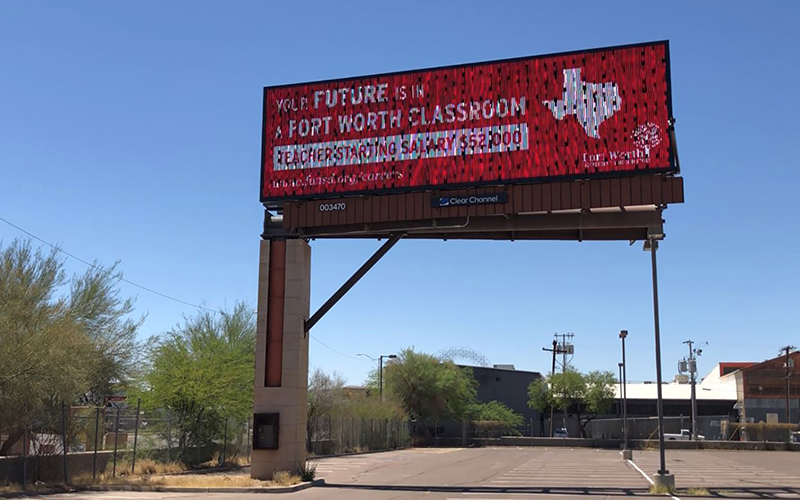 Officials with the Fort Worth Independent School District said they are not trying to poach Arizona teachers with their billboards, but merely trying to fill the hundreds of job openings the district has every year. (Photo by Kayla Koch/Cronkite News)

A teacher’s union official in Arizona said he expects the Phoenix billboards will be successful for the Texas district as well.

“It’s the direction we’re going, even with Red for Ed,” said Ralph Quintana, president of American Federation of Teachers in Arizona. “The pay they’re offering is significant. Why wouldn’t they (Arizona teachers) leave, especially if they have no ties here?”

Gov. Doug Ducey has proposed raising teacher pay by 20 percent by fiscal 2020, which Quintana called a step in the right direction but still barely enough for teachers to “keep their heads above water.”

“It’s just not enough,” Quintana said. “The government only gave back $100 million, but the yearly funding (deficit) is close to $1 billion. No funds are being restored. My biggest worry is that we’ll be the new Kansas.”

Bond said the goal of the billboards is not to steal teachers from Arizona but to fill empty teacher slots in the Fort Worth district, which hires anywhere from 500 to 700 teachers a year.

“We have to look in a lot of different places, and most education schools are not turning out enough teachers to fill those kinds of spots,” Bond said Wednesday. “We just have to reach out a little further.

“Our goal is to say to veteran teachers, and to new teachers who are looking for their first job, ‘If you are thinking about moving … think about Fort Worth, Texas,” Bond said. “We are offering this for a starting pay. Give us a call. We’ll tell you what the other benefits are. Maybe you would like to come here, and we would like to have you.'”

The billboards include a link to the careers page for the Fort Worth district, which describes itself in press materials as a “growing urban district of 86,000 students” with 143 campuses and more than 10,000 employees.

Vega, of the school boards association, said that if there’s an upside to the billboards, it’s that maybe they will serve as a reminder to Arizona voters and lawmakers that there is a problem with schools in the state that needs to be addressed.

“It’s evident that public education advocates and the legislature … recognize that there is a crisis going on and that we definitely need to be doing more for teachers,” she said. “It’s evident that voters just all agree that we need to keep paying teachers more and value them more.”