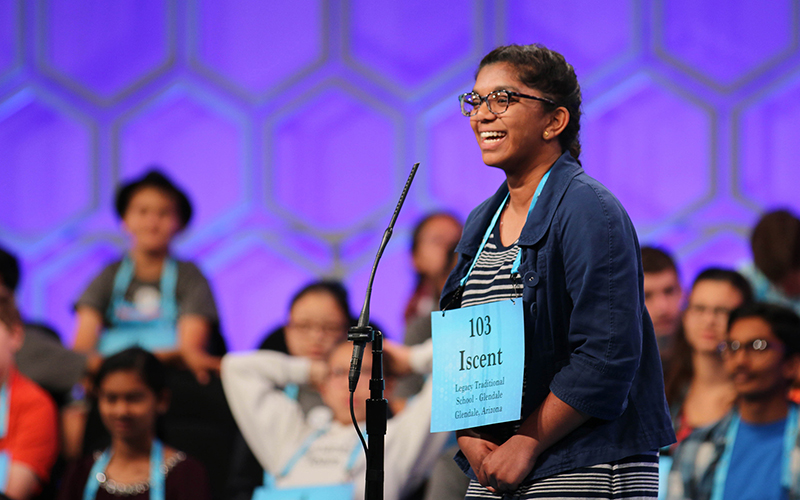 Legacy Traditional School eighth-grader Iscent George said it was more important to enjoy the fact of being at the national spelling bee than worrying about winning or losing. (Photo by Bryan Pietsch/Cronkite News) 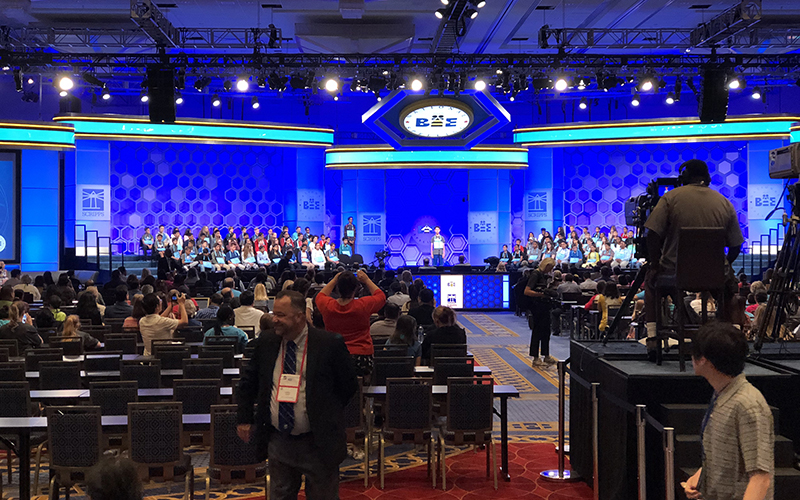 More than 500 students, including eight from Arizona, took the stage at the Gaylord National Harbor resort near Washington this week to compete in the 91st Scripps National Speling Bee. (Photo by Dani Coble/Cronkite News) 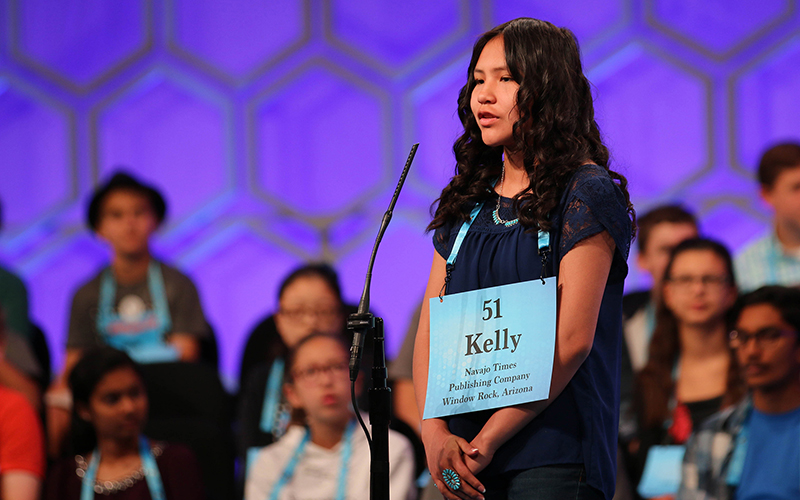 This year’s National Spelling Bee was a return engagement for Kelly Haven, a seventh-grader at Tsehootsoi Middle School who was a speller in the national competition in 2017. (Photo by Bryan Pietsch/Cronkite News) 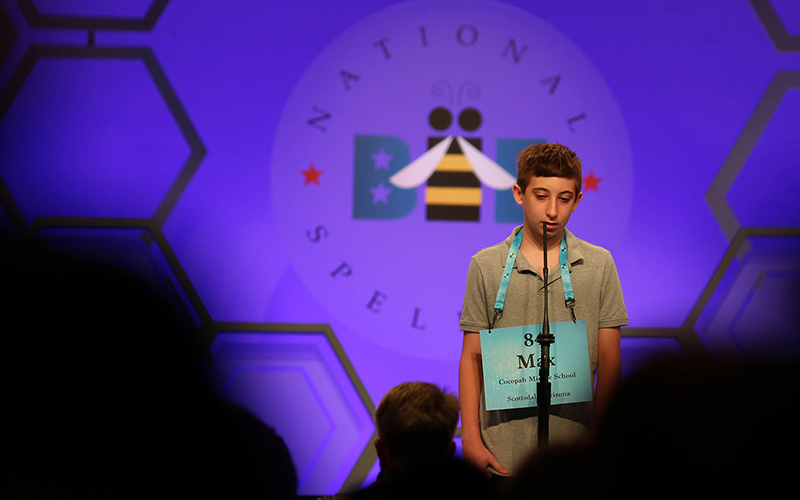 Cocopah Middle School sixth-grader Max Greenspan carefully – and correctly – spells out the word “misdemeanant” during the third round of the spelling bee on Wednesday. (Photo by Bryan Pietsch/Cronkite News) 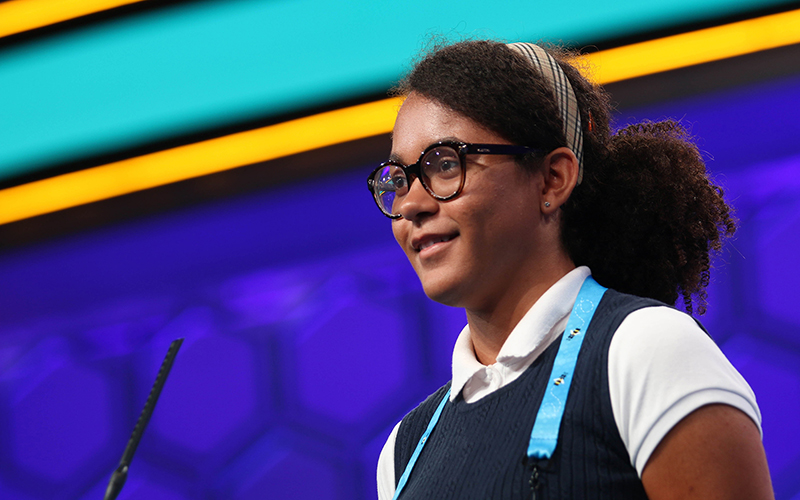 Lindsay Davis, an eighthi-grader at Estrella Mountain Elementary School, said she has been competing in spelling bees for four years. But she ages out after this year. (Photo by Bryan Pietsch/Cronkite News)

The Glendale eighth-grader was one of eight Arizona students in Washington this week for the 91st Scripps National Spelling Bee and one of seven still standing Wednesday for the third round of the competition.

None of the Arizona contestants made the list of 41 spellers who will compete in the finals Thursday, winnowed down from the 519 who started the competition this week.

But Iscent, speaking before the finalists were announced, said that win or lose, all the contestants should take pride in the fact that they made it to the nationals level from the millions of students across the country who competed in local bees.

“I hope they choose to relish the experience instead of mourning who won or who lost, because only one or two people can win,” said Iscent, who attends Legacy Traditional School. “If you’re striving for mainly that (winning), you won’t get the chance to enjoy what it means to really be here.”

The bee brings together elementary and middle school students from all 50 states as well as from U.S. territories, government schools overseas and some foreign countries.

They faced a written test of spelling and vocabulary Tuesday, followed by the familiar rounds of individual spelling on stage. Each student approached the microphone and cautiously spelled out words from misdemeanant to solecism to calzone. A misspelling brought the dreaded ding of a bell and elimination for the student.

Some were visibly upset, some were unfazed and some were gracious, thanking the judges and wishing the remaining contestants good luck.

The written test came back into play late Wednesday, when scores for those still remaining were used to determine who made the final.

“There are so many great spellers in every state, so it’s very tough,” said Max Greenspan, a sixth-grader from Scottsdale, before the finalists were named.

A previous version of this story misquoted bee contestant Daniel Wu in the 14th graf. Daniel placed in the top five in his class spelling bee, but won his schoolwide bee. The story has been corrected, but clients who used earlier versions are asked to run the correction that can be found here.

Max appeared to be happy just to be there. The Cocopah Middle School student buzzed around hallways during breaks, gathering signatures from pronouncers and other spellers in a Scripps yearbook, with more than 60 signatures as of Wednesday morning.

The camaraderie was also noticeable as spellers high-fived each other while walking between their seats and the podium. Some mouthed “good luck” or “nice job!” to fellow spellers.

And for some of those aiming for the title of champion, there’s always next year.

Daniel Wu, a seventh-grader from Chandler, said he didn’t start out vying for the title, only starting to study after he placed in the top five in his class bee, before going on to win his schoolwide bee. But he hopes to come back to the national competition again.

“I’ll definitely try next year, I hope to come back here,” said Daniel, an Arizona College Preparatory School student. “I didn’t win but it was fun.”

This year’s bee was the last for Iscent, who will age out after this year. But while she wanted to win this year, she also said she wouldn’t be too upset if Wednesday’s appearance was her last at the bee.

“If I didn’t make it, then I’ll be a little happy because I won’t have to go on stage and go through nerve-wracking tension again,” she said.