PHOENIX – Gov. Doug Ducey on Monday said he believes that evolution should remain a part of Arizona’s science education curriculum, referring to state schools’ superintendent Diane Douglas attempts to remove or water down references to evolution.

Douglas, the Arizona superintendent of public instruction, had recommended striking the word “evolution” from current science standards, saying that evolution is just a theory, according to media accounts.

Ducey, according to Capitol Media Services, said God created humanity but that evolutionary forces also are at work in nature.

“Evolution will remain part of the education curriculum,” he said, according to the story.

Douglas did not return a request for comment Monday. 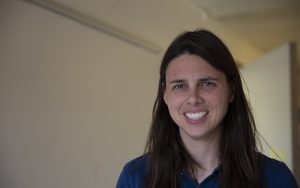 Sara Brownell, an evolution-education researcher at Arizona State University, said evolution “is as close to fact as anything is in science.” (Photo by Jéssica Alvarado Gámez/Cronkite News)

“The problem with that is that evolution is as close to fact as anything is in science,” she said.

Douglas’ perspective “is artificially making it seem like we’re really hesitant about evolution, when evolution is one of the big ideas of biology.”

The solution, Brownell said, is not to teach creationism or teach intelligent design but to highlight to students that that they don’t have to be at the extremes – disbelieve in God and accept evolution, or believe in a God and reject evolution.

Many people with religious beliefs accept evolution, she said, which shows there is a middle ground of acceptance.

In addition, Brownell said, removing the term would make Arizona’s students less competitive with students elsewhere in the U.S. and around the world.

“If evolution is a guiding principle for all of biology, then how can our students compete if they’re not taught evolution to the same extent as other students,” she said.

Jennifer Fewell, who also teaches about evolution at ASU, agreed.

She said knows of no major university that does not teach evolution.

“You can’t simply say you don’t like a concept in biology and refuse to teach it and expect your students to excel later,” Fewell said.

Evolution is a change in the genetic composition of a specific population over time, she said, adding, “To say you do or do not believe in a process that’s observable and measurable makes very little sense.”

The debate over evolution in schools has played out on social media, with some saying on Twitter that removing it from science courses would be wrong.

Arizona Superintendent Diane Douglas is inserting her personal religious beliefs. At a political event Douglas said that she believed intelligent design should be taught. Evolution and evolve have been removed.

Az is already an undesirable place for teachers, now even less so.