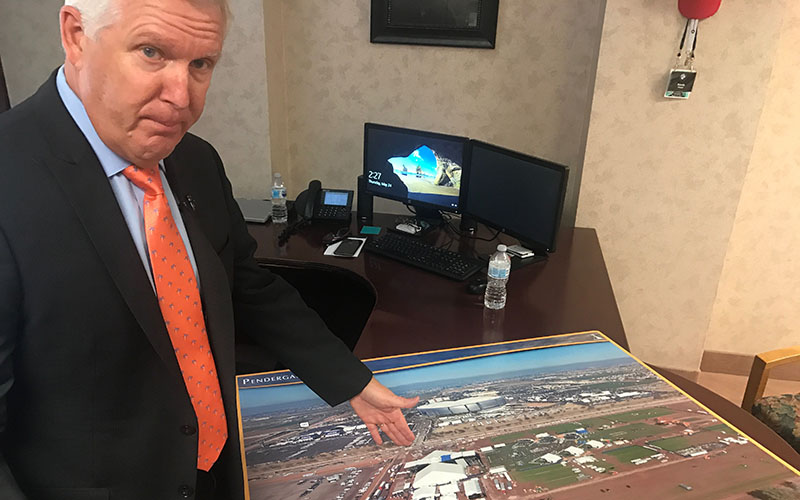 Glendale City Manager Kevin Phelps sees the 2023 Super Bowl as a huge economic opportunity for the city. He was a key player in helping mend Glendale’s relationship with the Arizona Cardinals. (Photo by Jack Harris/Cronkite News) 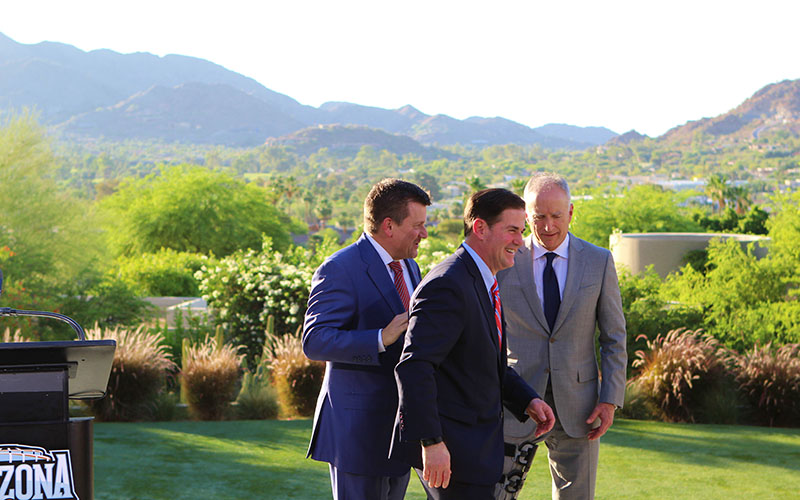 GLENDALE – When Kevin Phelps met with Arizona Cardinals President Michael Bidwill in November 2015, all was not well in Glendale.

At the time, the once-harmonious bond between Bidwill’s Cardinals and the city – where the team’s home field, University of Phoenix Stadium, is located – was in shambles. The NFL franchise and the Arizona Sports and Tourism Authority, which owns the stadium, were filing a nearly $67 million claim against the city, and the dispute had dragged well into its third year.

It was against that backdrop that Phelps – a career city and county politician in the Seattle area who was one of two candidates to become the next Glendale city manager – agreed to a dinner meeting with Bidwill during a Cardinals road trip to Seattle.

They dined at the Metropolitan Grill, a classy downtown steak house blocks north of the Seahawks’ CenturyLink Field, discussing the issues between the team and Phelps’ potential employer.

And for more than an hour, Bidwill did all the talking.

“The first hour and 15 minutes, Michael (did) nothing but (tell) me about all the bad things that Glendale did,” said Phelps, now in his fourth year as Glendale city manager.

Bidwill believed he had plenty to address. As detailed by azcentral, Glendale had backed out of a $36 million promise to improve infrastructure and parking before later allowing more than 5,000 stadium parking spots to be razed by the construction of an outlet mall.

“He was very specific,” Phelps remembers of the criticism.

Once Bidwill finished, the soon-to-be city manager took his first step toward rebuilding the relationship.

“I said, ‘Mr. Bidwill, are we having this meeting to try and encourage me to back out of the running for the position?’ and he laughed and smiled and he said, ‘Oh no, that’s not the purpose of this at all.’ Then I said, ‘So you’re telling me this can be fixed?’

“And he said, ‘This relationship absolutely can be fixed.’ ”

Three years later, it has.

“I think all would say we were surprised a little bit by how quick we got nominated,” Phelps recalled in an interview with Cronkite News on Thursday.

“I think the NFL recognizes our cities work well together, that we partner well and we have a lot of expertise. I think that will always be a competitive advantage.”

Bumps in the road

At first glance, it’s easy to mistake the fourth floor lobby in Glendale’s City Hall for a sports memorabilia shop.

A box-framed black kachina-style Arizona Coyotes jersey numbered ‘2001’ – the year the city struck a deal with the NHL team to relocate to the West Valley – hangs next to the elevators. A small blue couch that hosts visitors is surrounded by keepsakes: A signed Arizona Cardinals helmet; a spring training lineup card; a home plate from the opening of the Camelback Ranch spring training complex.

On the wall directly above the couch hangs something else, too: a framed red throwback style Cardinals jersey, numbered “02” to represent the year (2002) the NFL team and city finalized plans to build University of Phoenix Stadium.

It serves as a constant reminder of the city’s intrinsic link with sports, and the Cardinals specifically, a bond that needed to be remedied for Arizona to land Super Bowl LVII.

The most recent Super Bowl to be held in the state (Super Bowl XLIX in 2015) added to the conflict between Glendale and the Cardinals. The city claimed to have lost money from the event, stating in a “post event analysis” report published in October 2015 that “accounting for Glendale’s direct costs and direct fee-based revenue, the result was a negative net financial impact of $578,965 (for the city).”

The University of Phoenix Stadium, site of Super Bowls in 2008 and 2015, will host Super Bowl LVII in 2023. Arizona’s first Super Bowl, in 1996, was played in Tempe’s Sun Devil Stadium. (Photo via Wikimedia Commons)

But that number didn’t include the difficult-to-quantify economic benefits created by the publicity from hosting the event. In September 2014, Bidwill told KTAR that Glendale claimed to have earned $13 million worth in media exposure from the 2008 Super Bowl alone. Even Phelps admitted he wasn’t “necessarily convinced” the city lost money in the 2015 game.

Glendale Mayor Jerry Weiers was not in office when Super Bowl XLIX was awarded to Arizona in October 2011. Plans were well under way by the time he was sworn in in early in 2013. Leading up to the game, he made waves by telling ESPN, “I totally believe we will lose money on this.” Bidwill responded by calling the claim “a bunch of malarkey.”

Though he wasn’t yet Glendale’s city manager for the 2015 game, Phelps remembers the discord between the city and the team.

“There were a few bumps in the road,” he said. “I think it’s safe to say the relationship between the NFL and the Cardinals and the city of Glendale was far from optimal.”

This time around, Weiers promised, things will be different. He said it’s helped that he has been involved with this bid from Day 1.

“Last time it was so new to me, all the different things happening,” the mayor told Cronkite News. “You sort of understand what’s going on but I suppose it’s like parachuting. … The first time, you are just trying to hang on. The second time, you actually get to enjoy it. I’m looking forward to this.”

More importantly, Glendale and the Cardinals have patched things up. Weiers called the past disagreements “water under the bridge.” Phelps said Bidwill has worked directly with the city in recent years, too. No one has been left in the dark.

“Everybody has taken the time to understand everybody else’s opinion, ideas, the direction that this needs to go to be beneficial to everybody,” Weiers said, adding that the City Council voted unanimously in favor of hosting the game again.

In November 2016 – a year after Phelps was appointed city manager – the two sides reached a agreement to settle the $67 million dispute. As reported by azcentral, Glendale agreed to pay the $17 million total to the team and the sports and tourism authority to add parking. The Cardinals dropped their potential lawsuit. It was resolution at last.

“It became apparent to me that Glendale did not honor some of its commitments, and I felt that needed to be rectified,” Phelps said. “We did that (agreement) to re-establish a more positive working relationship.”

It’s paved the way for the Super Bowl to return to Glendale for a third time.

“The fact is that everybody is on the same page now,” Weiers said. “We’re all moving forward and we’ve been awarded the game so obviously everybody understands that we can do this and we’re going to do it.”

Tucked away in the corner of Phelps’ office is a collection of oversized poster boards. Printed on them are colored maps of the Westgate and Loop 101 zone of west Glendale, the area that will be the epicenter of Super Bowl activities in the West Valley in 2023.

Phelps loves to show them off.

On Thursday, the city manager was most excited about construction underway a block south of the stadium, a new 4,000-space parking lot that was originally presented as the centerpiece of the 2016 settlement. The lot will be connected to the stadium by a pedestrian tunnel that will pass underneath Bethany Home Road, and 95th Avenue will be extended all the way to Camelback Road to provide an exit route from games.

Phelps said the city and team worked together closely to design the project. 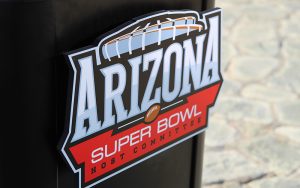 The Super Bowl will be coming back to Arizona in 2023, the fourth time the event has been held in the state. (Photo by Jack Harris/Cronkite News)

Once-burned bridges have been rebuilt, thousands of parking spaces are under construction and, most of all, the Super Bowl is coming back to Arizona.

“As a region we’ve understood the power of getting these types of events is by working together,” Phelps said. “But leadership has to set that tone and we have to be committed to working toward that same goal.”

Phelps said he expects a minimum of five new hotels to open in the Westgate area as well, a move he believes will flood the city’s economy with even more tourism dollars when the event comes to town in 2023.

“When you bring dollars in from the outside, they really have a different impact than recirculating dollars from within,” Phelps said. “It’s a great way to build your local economy, around the hospitality industry.”

Phelps understands the benefits of “mega-events.” He was a deputy executive in Pierce County, just outside of Seattle, in 2015, when it hosted the U.S. Open golf tournament at Chamber’s Bay golf course and witnessed his county turn a $1.1 million profit, as reported by The News Tribune.

Phelps sees similar potential for Glendale in the 2023.

“One of our strategic initiatives for our economic development here in Glendale is built around tourism. One of the things an event like the Super Bowl does, it really takes your image and your identification in a broadcast not only regional, not only around the country but literally world-wide,” he said.

“It’s a great return on investment for our taxpayers.”

For all the headaches it created, the 2015 Super Bowl still produced over $720 million of economic impact within the state, according to an ASU study. Phelps offered an optimistic guess that the 2023 game’s impact could top $1 billion for the state. There was a big incentive for all sides to begin working together again.

“(We have) to be a little bit less concerned over who gets what slice of the pie,” he said. “It’s a really big piece of pie. We should all be able to have a large enough slice that we’ll be happy with.”