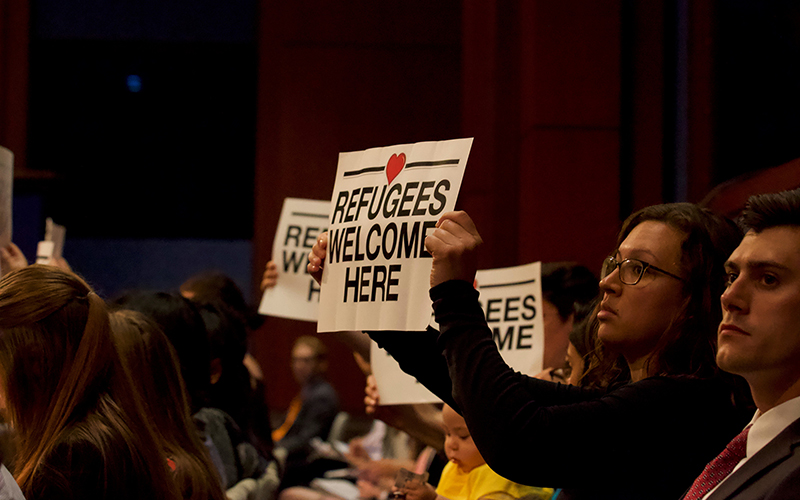 Protesters at a House hearing hold up signs urging lawmakers to reject proposals that would make it harder for immigrants to claim asylum in the U.S. The protesters were subsequently removed from the room without incident. (Photo Bryan Pietsch/Cronkite News) 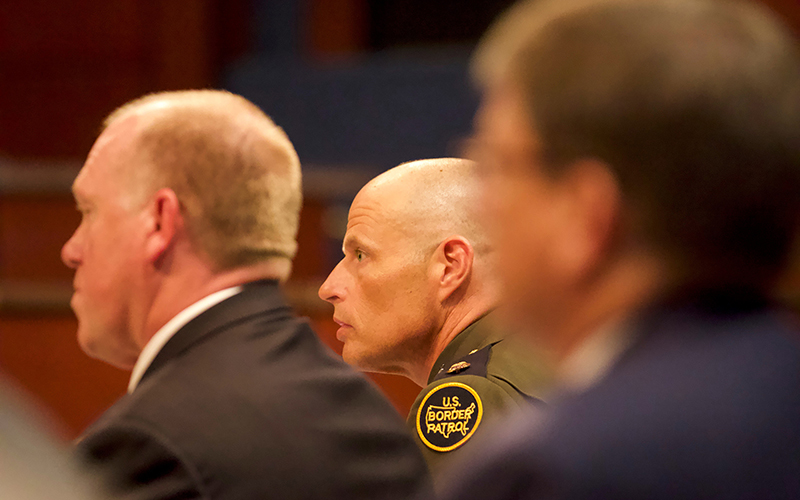 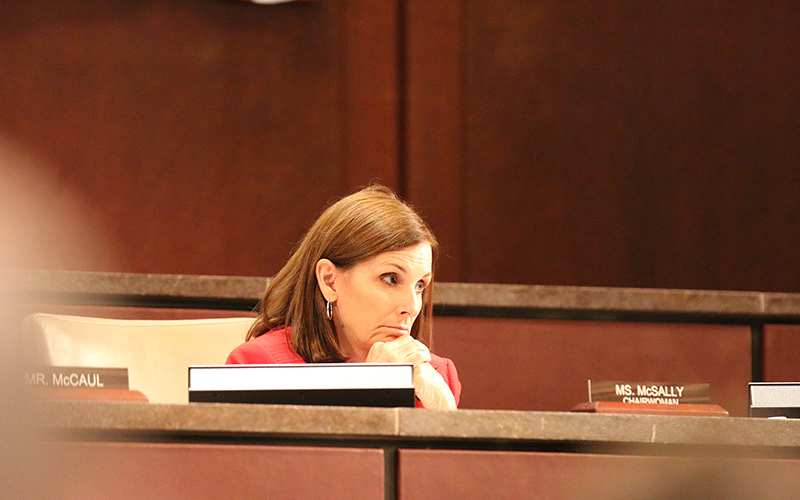 Rep. Martha McSally, R-Tucson, said that problems with the current immigration law have led to “borders … overrun by lawlessness,” as increasing numbers of immigrants show up at the nation’s borders seeking asylum here. (Photo by Bryan Pietsch/Cronkite News)

WASHINGTON – Leaders of the three main border agencies told a House subcommittee Tuesday that loopholes in current immigration policy are letting large numbers of immigrants seek asylum by claiming “credible fear” of harm if they are sent home.

“The basis for asylum is very generous in our country, and the credible fear standard is even moreso,” said U.S. Citizenship and Immigration Services Director Lee Francis Cissna, who said asylum filings have tripled from fiscal 2014 to 2017.

Under current law, immigrants can seek asylum if being returned to their home country presents a threat of harm or persecution, usually based on racial or religious grounds, but witnesses Tuesday said the law is too easily exploited.

“An alien saying the magic word asylum at the border only has to establish a significant possibility that there is a reasonable possibility that he or she will be persecuted,” said Cissna, who said the number of asylum claims in 2017 was the highest in over 20 years.

The hearing by the House Homeland Security Committee’s Border and Maritime Security Subcommittee comes just weeks after a highly publicized caravan of more than 1,000 Mexican and Central American immigrants crossed Mexico and gathered at the U.S. border.

In her opening statement, Rep. Martha McSally, R-Tucson, laid blame for the caravan on an asylum process she said is “broken” and “rife with fraudulent claims.” McSally, chairwoman of the subcommittee, said the U.S. must close those loopholes.

“The reason for the increase is simple, individuals have learned how to exploit the system,” said McSally, who called Tuesday’s hearing with leaders of CIS, Immigration and Customs Enforcement and Customs and Border Protection.

The hearing was interrupted briefly by protesters from the National Domestic Workers Alliance who quietly held signs that said, “Refugees Welcome Here.” They were removed without incident by Capitol Police after they ignored repeated warnings from McSally about policies against protesting with signs.

“Asylum is not a loophole, it is a life-saving option for many families, and it is our responsibility to welcome those who come to our shores seeking safety and protection,” said the group’s political director, Jess Morales Rocketto, in a statement released shortly after the hearing.

But McSally, Cissna and other witnesses said fraudulent claims are endangering immigrants who have legitimate cases.

Cissna called for harsher penalties for those who lie in their applications, and a clearer definition of what constitutes fraudulent or even frivolous claims so that immigration officials can “weed out bad cases that clog up the system for legitimate asylum seekers.”

McSally said that immigrants who enter the country on an asylum claim may be given hearing dates that are years in the future – but they can get work permits after 180 days. With immigration courts currently facing an asylum backlog of 318,000 cases, McSally said it “should surprise no one” that many immigrants never show up for their hearings.

“They’re fleeing the violence. When one of your children is killed, and you have one left, you are going to run. You are going to try to seek safety,” Barragan said.

“I feel bad, but I have a job to do,” Homan said. “I have to enforce the law and uphold the oath I took.”