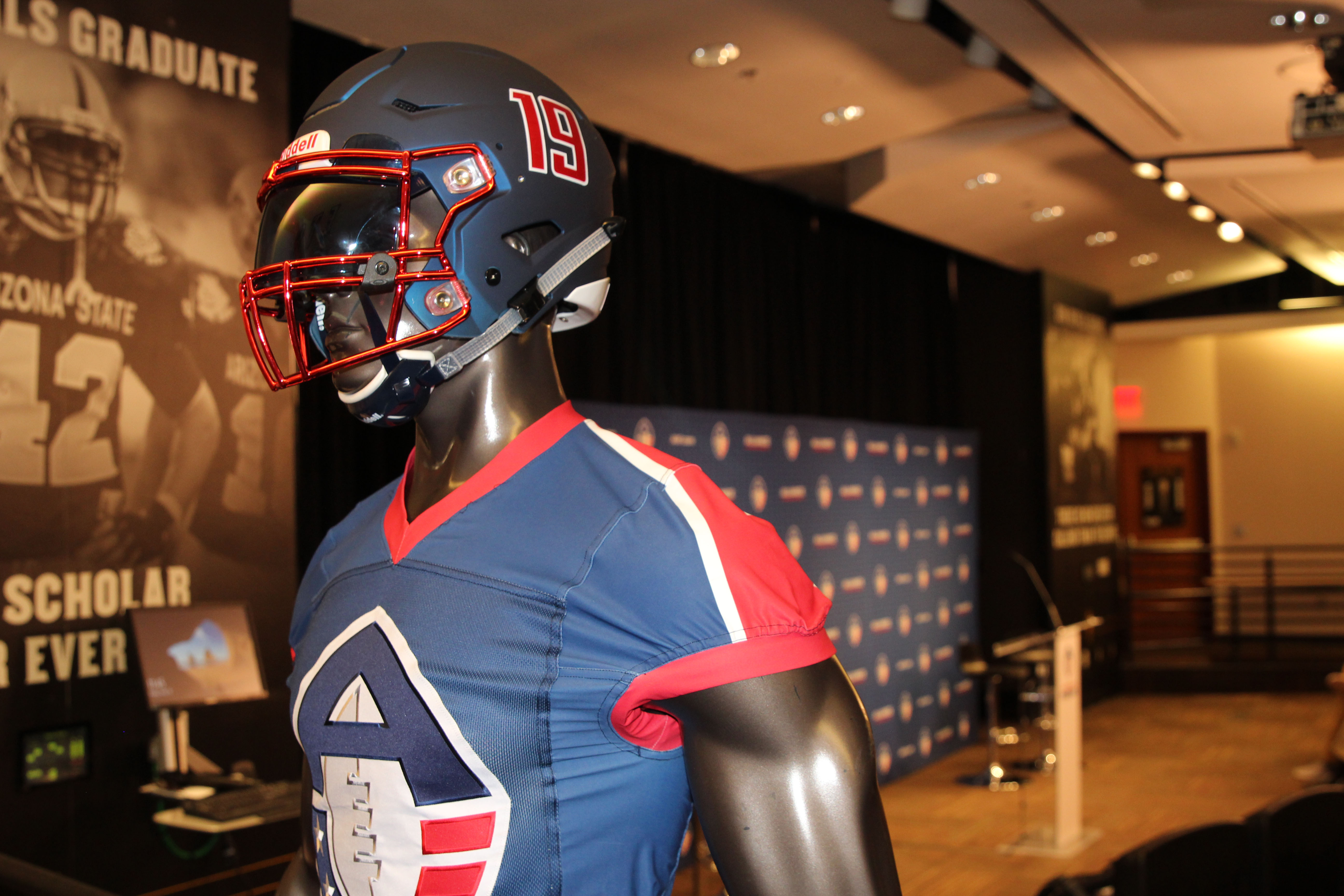 A possible uniform for the Phoenix franchise of the Alliance of American Football stands at the entrance to Friday’s press conference introducing its new coach. Uniforms and logos are yet to be announced by the league. (Photo by Nathanael Gabler/Cronkite News)

TEMPE – Rick Neuheisel, who grew up just miles from Sun Devil Stadium, was named coach of the Phoenix franchise in the upstart Alliance of American Football league Friday.

The league was unveiled in March by co-founding television producer and director Charlie Ebersol and NFL Hall of Fame executive Bill Polian.

Starting in the spring of 2019, the league will contain eight teams – Atlanta, Memphis, Orlando, Salt Lake, Phoenix, and three yet to be announced. The league will feature a 10-game regular season followed by a four-team playoff. The team will play its home games in Sun Devil Stadium.

Neuheisel grew up in Tempe, graduating from McClintock High School in 1979. Although he hasn’t held a coaching job since 2011, he has 10 years of collegiate head coaching experience with Colorado, Washington and UCLA as well as three years with the NFL’s Baltimore Ravens as a quarterbacks coach and offensive coordinator.

Since leaving coaching, he has worked at the CBS Sports Network and Pac-12 Networks.

“The one thing you do as a broadcaster is you take in way more than just your own scheme,” Neuheisel said. “Coming at this going back into the coaching arena, I’ve got a much more full view of what’s happening out there in the world of football.”

As a professional quarterback, Neuheisel spent two seasons with the USFL’s San Antonio Gunslingers in the ‘80s, before making two starts in his lone season with the San Diego Chargers.

Ebersol and company are not the first to try to create another professional football league in the United States. The World Football League, founded in 1974, lasted less than two seasons before folding. The XFL, with its reputation for violence and offbeat antics, folded in 2001 after only two seasons.

The best-fairing NFL alternative was the United States Football League (USFL), which lasted only three seasons before its end in 1986. However, many believe the AAF has advantages not available to any of its failed predecessors.

“I think those that study history have a real chance to take advantage of great ideas and make them better,” Neuheisel said. “They know the formula as to how to make spring football a viable and entertaining experience.”

In the AAF’s introductory press conference, Ebersol announced the league’s partnership with CBS. Opening night of the AAF, February 9, 2019 – six days after the Super Bowl – will be aired in primetime on CBS.

Additionally, one game per week will be aired on CBS Sports Network until the AAF championship game, which will return to CBS. Games will also be streaming for free on the Alliance App.

The league may look like the NFL, but with some key differences.

“(The) kickoff is one of the least popular plays among fans, and it’s the most dangerous,” Ebersol said. “So we’re going to get rid of kickoffs.”

Additionally, there will be no extra point attempts – only two-point conversions. The league will not have designated TV timeout commercial stoppages and will show 60 percent less commercials than other televised football.

In addition to former NFL players such as Jared Allen investing in the league, significant money from Silicon Valley has poured in, an advantage that previous spring football leagues did not have.

Among the investors are Peter Theil’s Founders Fund, who were the first investors in SpaceX and part of the early round of Facebook funding, and The Chernin Group, who have investments in both entertainment, such as Fox’s New Girl, and media with Barstool Sports.

The Alliance Phoenix official team name and mascot is yet to be announced, but Ebersol said he expects it to relate to the community in some way.

Expect the rollout of the remaining three teams, as well as their head coaches, within coming weeks.

With much of the details yet to come, the puzzle pieces are beginning to line up for the AAF as the planned launch date of February 9, 2019 looms.