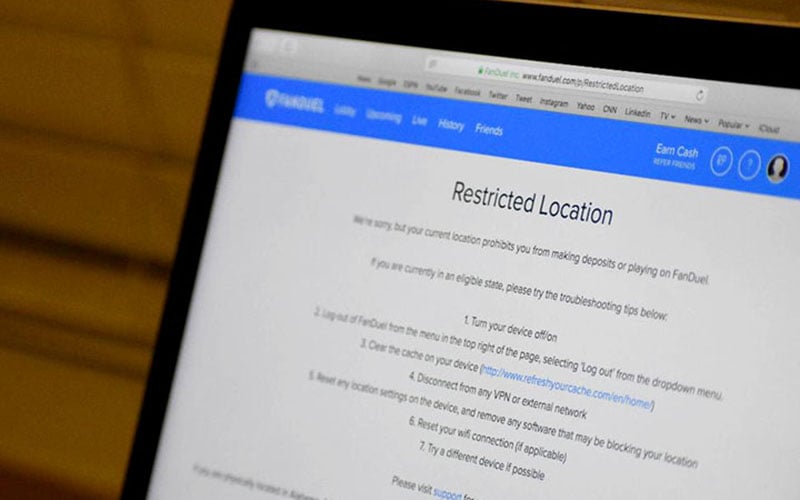 Residents in Arizona can’t participate in Daily Fantasy Sports Sites, including FanDuel and DraftKings. It is considered a form of gambling, which the state bans. (Photo by Rebecca Dantuono/Cronkite News)

PHOENIX – The opportunity to play the role of virtual general manager is enticing to sports fans, especially when money is involved.

In Arizona, those opportunities are unavailable.

According to Arizona state law, DFS participation is considered a form of gambling, which the state bans. The only legal gambling in the state is limited to tribal casinos, horse and dog racing, and the state lottery.

But it isn’t the state legislators keeping the state from modifying the laws, said Stacie Stern, Executive Vice President for the Fantasy Trade Sports Association (FTSA). It’s the compact.

Stern, also the Manager of Government Affairs for FanDuel, says the real question is if fantasy sports are allowed based on the current agreement, also known as a compact, Arizona has with the tribes.

“This question in Arizona is about how we categorize fantasy sports,” Stern said. “It’s not gambling and it’s not gaming in our mind. We don’t want to upset the compact, so the legislatures are very reluctant to do anything to hurt the compact and the money that the state gets from the tribes based on those compacts.”

In February 2016, Arizona attempted to exclude fantasy sports from under the gambling law, which would allow residents access to use sites such as FanDuel or DraftKings for their online fantasy gaming ventures.

Senate Bill 1515 was introduced, with the goal of eliminating DFS from Arizona’s definition of gambling. The bill didn’t last long, quickly dying in the Senate before the end of the month.

Despite these DFS restrictions, Arizona residents are still able to find a way to add some excitement to the game using money.

“A lot of my friends and I do it together,” Pinar said. “We collaborate on what types of bets we make with all different sports.”

Pinar, who is about to graduate from Arizona State with a a business degree in sports and media, says if DFS participation was legal, he would “absolutely” be in on the action.

“It’s definitely a bummer that stuff isn’t legal here,” Pinar said. “I would be all over it if it was.”

Pinar has been using Bovada for the past year and says placing money on teams he wouldn’t normally watch has caused him to pay a little more attention.

“I love sports just like a lot of people do and it definitely gets you more interested in watching the games, because they hold more at stake if you’re betting money on it,” Pinar said.

With the rapid increase in sports coverage on social media, more fans are following games on Twitter or catching the highlights on TV later that night, rather than sticking around to watch the entirety of the game live.

But with fantasy sports on the rise, live TV sports viewership is fighting that trend.

According to the FSTA, there are 59.3 million fantasy sports participants in the United States and Canada.

This is the highest recorded number to date.
Sixty-four percent of DFS participants said they are watching more live sports because of fantasy, the FTSA reports.

“I’ve always been a huge sports fan and I have always watched sports,” Pinar said. “But I definitely think that my participation in betting has increased my viewership in sports without a doubt.”

ASU student-athlete Mason Ford says he has friends who are heavy participants in fantasy sports. “If (the game) is on, they’ll make sure to be watching it, be sure to stay on top of things,” Ford said.

Ford, also an Arizona native, believes the law should be overturned if it could have a positive effect on the state, but it won’t apply to him either way. At least not until graduation.

“It doesn’t really affect me too much in either way,” said Ford, who is a senior on the Arizona State track and field team.

As a student athlete, Ford, also the President of the Student Athlete Advisory Committee at ASU, is restricted from participating in fantasy sports whether Arizona legalizes it or not.

“My only thing is that if other states are doing it, and it’s beneficial for the state somehow, whether there’s a tax on it or something like that, if it’s beneficial in that way, that’s fine by me,” Ford said. “But if not, and they feel that’s what’s necessary, then that’s fine with me, too.”

According to the NCAA website, “The NCAA opposes all forms of legal and illegal sports wagering, which has the potential to undermine the integrity of sports contests and jeopardizes the welfare of student-athletes and the intercollegiate athletics community.”

This eliminates all student-athletes across the country from participating in DFS, whether they are legal in the athlete’s resident state or not.

“I understand the reasoning as to why they’re put in place,” Ford said. “But I think if you’re not going to allow student athletes to bet on it, then you probably shouldn’t be able to bet on college sports in general. If you truly want to keep it amateur status, then you shouldn’t be able to market or make money off of these fantasy sports, or brackets or anything like that.”

The FTSA says that fantasy sports represents about a $7.22 billion industry.

Major sports leagues have teamed up with DFS operators because of the money involved. The NHL and MLB are partnered with DraftKings, and the NHL is with FanDuel.

Professional leagues are not only taking an interest in fantasy sports but are supportive because “they know this helps to drive viewership and that’s what they’re looking for,” Stern said.

“Besides people in the seats at the games, the other side of what they’re looking for is eyeballs,” Stern said. “It’s really important for all the leagues, that fantasy sports is something that people can participate in.”

Arizona isn’t the only state that bans fantasy sports. Iowa, Montana, Washington and Louisiana all have laws considering DFS to be a form of illegal gambling.

Unlike Arizona, other states are making progress.

Although it makes sense that states with rapidly growing fan bases would want to change their legislation, the process takes time. Until Arizona can figure out how to classify fantasy sports, no moves are being made.

“It (DFS) definitely creates more socializing with sports and I think it adds an extra element to it and makes it more exciting,” Pinar said. “I think inevitably, it has to be legalized.”