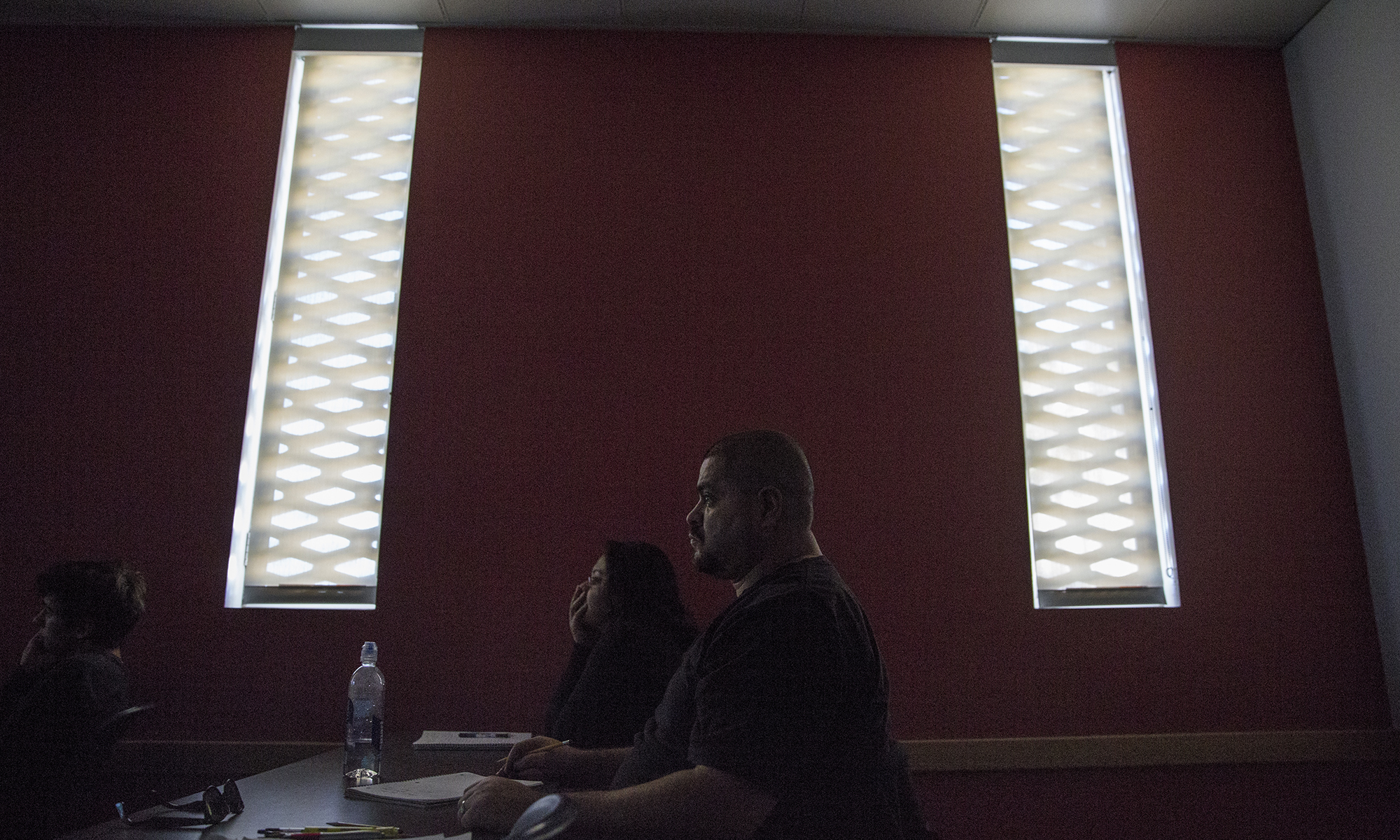 By Johanna Huckeba/Cronkite Borderlands Project | May 7, 2018

AGUADA, Puerto Rico – Manuel Aviles-Santiago talks on the phone with his parents in Puerto Rico every day, sometimes twice.

On the day Hurricane Maria hit in September 2017, he made his usual call to his mother before teaching his class at Arizona State University.

Then the nightmare began, and the phone stopped ringing. Radio silence.

Separated by thousands of miles with no way to communicate, Aviles-Santiago wondered how his family had fared after the hurricane left thousands of Puerto Ricans without power or shelter.

Reports on damage from major cities rolled in, but there was little information from less-populated areas, like his hometown Aguada, a small city on the island’s western coastal valley.

After two weeks of sleepless nights and scouring the internet for updates, Aviles-Santiago, an assistant professor of communication and culture, had an idea for his Introduction to Human Communication class.

“I’ll be teaching my class with the lights off – with no use of technology – in order to create awareness about the humanitarian crisis of Puerto Rico,” he posted on Facebook before heading to his evening class on Oct. 4, 2017. “Teaching in the dark for Puerto Rico.”

He slipped into the classroom without turning on the lights and, without explanation, left his students in the dark both literally and figuratively.

“It was a really interesting dynamic because the students didn’t question anything,” Aviles-Santiago said. “They just listened. They had to put a little bit more effort into listening because there were no visual components, and I had to put in a little more effort myself in teaching.”

He spoke about the situation – both his and the island’s – and later described the class as a humbling, “beautiful dynamic.” His main goal, he said, was to spark a conversation and make a distant, yet serious, issue become real to his students.

“For a long time, people didn’t understand what Puerto Rico was,” he said. “I think that now with this unfortunate situation, people are getting more interested in Puerto Rico. … (They’re) learning now that Puerto Ricans are U.S. citizens. I get that question a lot: ‘Are you here with a visa?’ or ‘How does that work?'”

At the end of the class, he explained the darkened classroom. The students asked more questions.

“They wanted to get more involved,” he said. “They sent me emails asking how they could help, and I encouraged them to promote visibility, which I think is so easy to do, especially with social media, and it doesn’t cost anything. So that’s what they did.”

Students took to social media, using variations of the hashtag #TeachingInTheDarkForPuertoRico and sharing photos of themselves using only candlelight.

“Having class in the dark really did bring it home for a lot of us because you don’t always think about how your education is a privilege,” said Madelyn Sugg, a sophomore business communication major. “These are other kids who are just trying to get the same education we’re trying to get.”

While Aviles-Santiago made the best of his situation in Arizona, his family was in survival mode in their small, elevated home on the east coast of the island.

The mind of his father, Jesus Aviles-Perez, was already ticking the night before the hurricane struck. The power already had been disconnected from their small town. 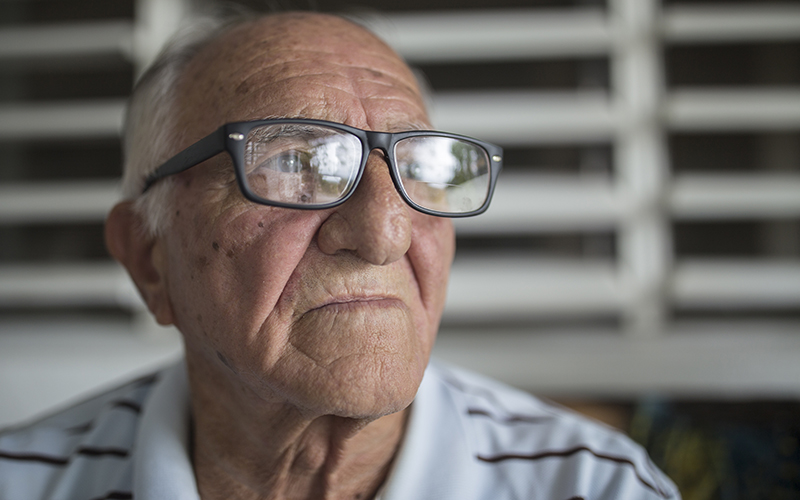 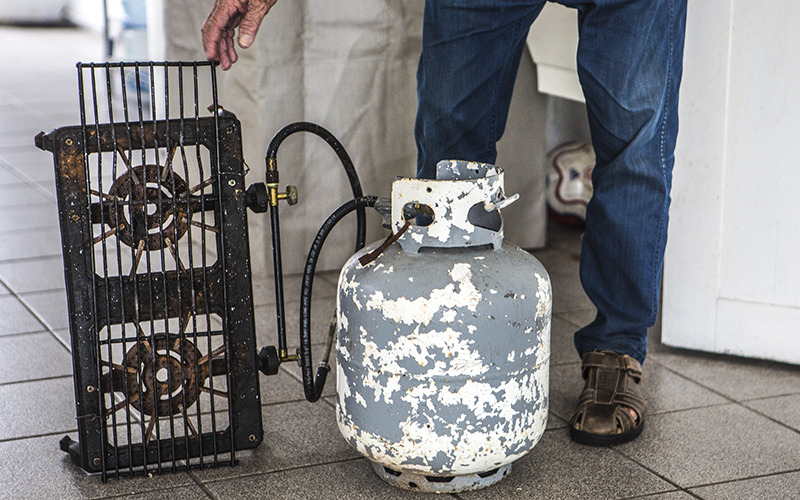 His father boarded up the windows and set up a funnel running from the roof to the backyard pool to collect water from the storm to use for plumbing. He pulled out a unused propane tank and a small stovetop to prepare meals, most of which came out of cans of chili and corned beef.

The family and their home physically weathered the storm. The intense winds did break an antenna, which sat crumbled on the rooftop, and left imprints of leaves that had lashed the walls. But emotionally, they faced ongoing challenges.

The loss of communication with their two sons living in mainland United States was especially difficult for Doris Santiago-Villarrubia, who was accustomed to speaking with them every day. She knew they would be concerned about the family, but she also worried about their own well-being.

Some days, she said, it was all she could think about.

“I got really skinny, because I couldn’t eat, I couldn’t sleep,” Santiago-Villarrubia said.
It took two weeks to make contact. Santiago-Villarrubia’s cousin was the first in the family to speak to the sons in Arizona and Texas after finding an old landline phone and discovering the telephone cables survived the brutal winds.

With cell phone service still down, her cousins’ home across the street quickly became a hub for calling distant loved-ones. 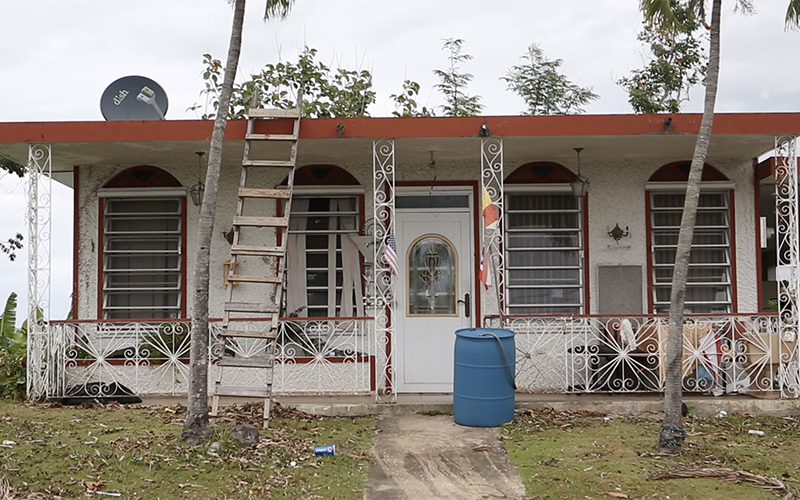 Doris Santiago-Villarrubia was accustomed to speaking with her two sons, who live in mainland United States, every day. Her cousins’ home, which had a working phone and landline, quickly became a hub for calling distant loved ones. (Photo by Johanna Huckeba/Cronkite Borderlands Project)

When Doris Santiago-Villarrubia made the first call, hearing her son’s voice cutting in and out of her spotty connection, she cried tears of joy and relief.

But that connection didn’t last long. Just a few days later, a Federal Emergency Management Agency truck drove down their street, accidentally ripping down the landline cables. In the next few weeks, they again endured the silence.

Armed with the knowledge his family was physically safe, Aviles-Santiago refocused on his awareness efforts in the states.

His original post about the classroom exercise gained traction on Facebook. Across the U.S., people commented on his efforts. Other professors tried it with their own students.

Jonathan Montalvo, an assistant professor of Spanish at Graceland University in Lamoni, Iowa, was among them.

Montalvo, also from Puerto Rico, taught in the dark with his three classes. Like Aviles-Santiago, he’d lost touch with his family after the storm.

“My motivation was, not only because I saw Manuel doing it, but because I was also affected personally by (Hurricane Maria), so I just wanted to create awareness,” he said.

Classes from at least three universities participated in their own versions of Teaching in the Dark for Puerto Rico, using darkness to shed light on the issue for scores of students.

The movement continued to grow in October when Aviles-Santiago wrote about his work for Puerto Rico’s largest paper, El Nuevo Día.

The story circulated online, but with most of the island without power or internet access, it was the print copy of the story that caught Melba Passapera’s eye.

Passapera, a bilingual teacher in Cidra, Puerto Rico, cut the article out of the newspaper and showed her colleagues because she was so moved by Aviles-Santiago’s project. His words, she said, motivated her “during those dark days.”

“I agreed with him 100 percent,” she said. “The only way that we, as an island that was so badly hit by this hurricane, are only going to be able to get up on our feet and start over again, is through education.” 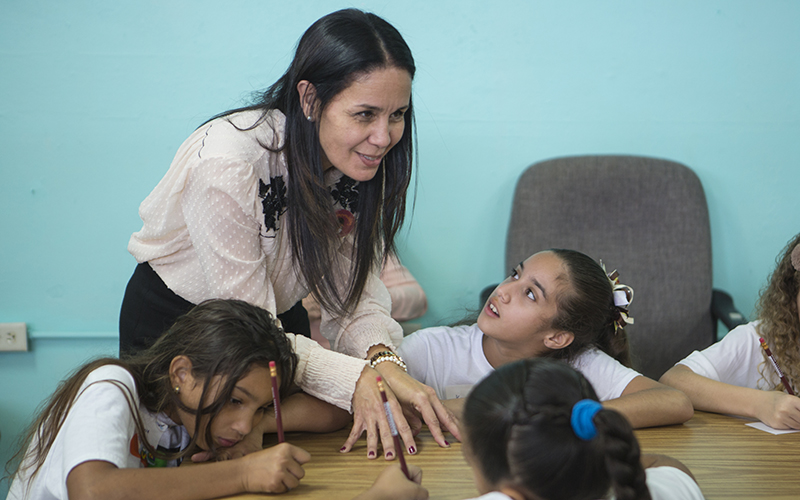 Passapera asked her mother, who was visiting Arizona at the time, to contact Aviles-Santiago. Meanwhile, she went to work, preparing for her students to return.

After her mother reached Aviles-Santiago, a collaboration was born.

Passapera compiled a list of supplies she needed, including desks, chairs, books, games and art supplies, and she sent it to Aviles-Santiago.

In November, the students returned to the hallways of Passapera’s school. Neighbors had removed fallen trees from the school’s courtyard and water-damaged books, posters and supplies from the classrooms.

On their first day back, Passapera stood in front of her students and read Aviles-Santiago’s article, and she instructed them to write letters to the island, titled “Dear Puerto Rico.”

The students described their experiences of Hurricane Maria, but they focused mainly on their hopes for the future of their home.

One of Passapera’s former students also took part, saying “my Puerto Rico is the beautiful smile of the child whose home was taken by Maria.”

“The fact that so far away, in Arizona, he’s teaching these students that maybe don’t know about us to be sympathetic with what happened to us,” 16-year-old Diomarys Garcia Cardona said. “I’m very glad he did that.”

Months later, Aviles-Santiago flew home over his winter break. As the plane coasted over the island, the blue tarps lining the streets struck him. This place was different than the home he once knew.

When he reunited with his family, he said he could see the emotional toll the hurricane took on his parents.

“It really frustrated me and struck me to see that. I felt that they aged throughout this process,” he said. “They looked tired and worried about the next hurricane season. They cannot stop thinking about it.”