Hazardous materials: Agencies respond to scores of spills and accidents in Arizona every year 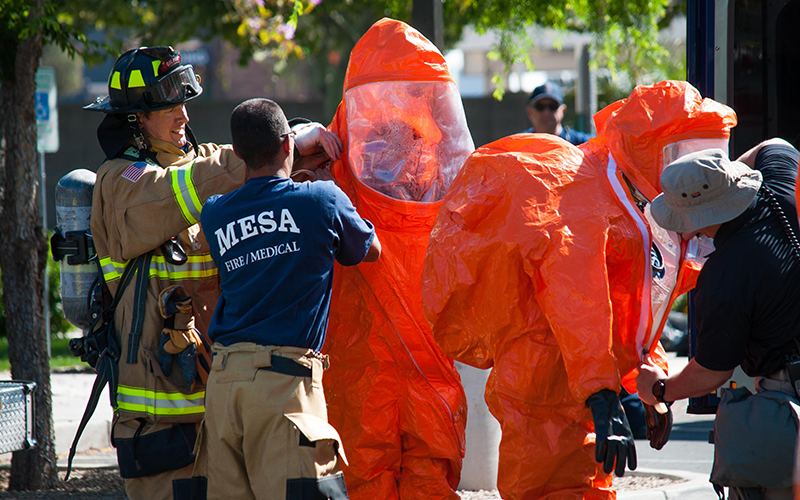 In the past decade, hundreds of hazardous materials incidents have resulted in deaths, injuries and costly cleanups in Arizona. Incidents range from a restaurant pouring grease into a sewer to millions of gallons of acid spilled in a mine. (U.S. Army National Guard photo by Staff Sgt. Wesley Parrell via Creative Commons)

PHOENIX – In Tucson last year, a collision between a pickup truck and tractor trailer spilled nearly 4,500 gallons of gasoline, igniting the tanker and killing the passengers in the pickup.

In March 2011, it took three hours and 80,000 gallons of water to contain a fuel tanker fire on a highway shoulder near Parker. The driver survived with a broken wrist and pelvis. The fire eventually burned out on its own and the environmental damage was contained with sand. 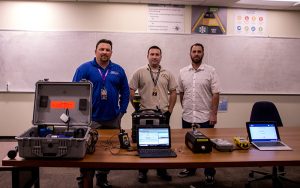 And in September 2007, a tractor trailer hauling 8,500 gallons of diesel fuel flipped over after striking a highway center divide near Payson. The truck burned and spilled diesel into the environment; the driver was killed.

Over the past 10 years, 2,000 accidents or incidents involving hazardous materials resulted in deaths, fires, injuries and costly cleanups across Arizona.

In Arizona from 2007 to 2017, the 2,000 hazardous-material incidents ranged from small-scale violations, like a restaurant pouring grease into a sewer, to millions of gallons of hazardous chemicals accidentally leaking into the environment.

Spills happen all over the state, varying in scale and severity. In the town of Bagdad in 2009, a bulldozer accidentally ruptured a pipe in a copper mine, releasing almost 2.5 million gallons of sulfuric acid into the soil.

In Gilbert in 2014, debris damaged a manhole, spilling 1 million gallons of sewage near Queen Creek.

Some of the most urgent accidents in the state can start with something as simple and small as a classroom thermometer.

“A teacher brought in an eraser-sized amount of mercury into a science class, in a jar, for whatever reason we do not know,” said Chris Nutter, the emergency resource coordinator for the Arizona Department of Environmental Quality’s hazmat team. “We do know that the kids got a hold of a mercury and decided to play with it and open it up.

“We went up the next day, we had readings through the whole passageway, one full corridor of the school, we had to confiscate shoes from students.”

The hazmat team scanned more than 300 Show Low students and teachers and visited 10 homes to test for mercury.

Nutter and the two other members of the response team, Scot Havir and Arcangel Barragan, are responsible for responding to hazardous material incidents statewide.

“We are the hazmat team for the state, and state on-scene coordinators for hazmat spills that affect the environment, waterways, public safety,” Nutter said, adding that they work with hazmat teams from the state transportation and public safety departments.

This includes responding to mercury incidents, analyzing wildfire and smoke, training local agencies in hazmat response and serving as a 24/7 on-call unit for all of Arizona.

This agency collaboration is called the Triad, and enables Arizona to prepare for most hazardous incidents. They are on the front lines of protecting public health and the environment.

Other times, Barragan said, “Fire and fuel spills, tanker spills are the most common ones that we get calls on. Sometimes just the responding agency locally needs some guidance.”

“We’re dealing with facilities, tankers, railcars, things of that nature,” Barragan said. “Bulk amounts of industrial types of chemicals. That’s what hazmat is for at least our run of things.”

A special focus is on rural fire departments, he said.

“A lot of those guys are volunteers. … Usually they won’t have a designated hazmat team. They’ll have one, maybe two guys who have gone through the courses. … We’ll try to get them information, get them equipment.”

The incidents reported to the National Response Center are forwarded to Arizona agencies, such as AZDEQ, the Arizona Department of Public Safety and others.

Of 204 fatalities reported to the National Response Center, more than half were trespasser deaths on railways. In these cases, the Arizona Corporation Commission is responsible for prevention in the future.

“It’s an unfortunate circumstance when that happens,” said Chris Watson, the railroad safety supervisor for the commission. “Our mission is to keep people safe in the state of Arizona around railroads.”

Watson called railway deaths a gray area: “When a trespasser fatality gets reported to us, we’re not first responders so we don’t immediately go out there at the scene. We’ll go out later on and kind of assess the situation of where that particular incident happened.”

Anyone on the railway is categorized as a trespasser unless they use a marked crossing area, Watson said. The Corporation Commission determines what changes are necessary after an accident.

This includes examining the incident location and figuring out how to make it safer. The commission might remove foliage, add signs and bells and coordinate with local agencies to help them improve their outreach.

“We like to go out to the communities and schools, talk with bus people, truck people and give that message of safety. … Getting the message out about trespassing – tracks are private property – is a big thing for us,” Watson said.

Both Watson’s team, the AZDEQ team and other hazmat responders have to be ready for a range of chemical and environmental challenges. Across the state, they invest as much in readiness as they do response.

“We’ll participate in a lot of exercises with other responders around the state, and all 15 counties, we participate in their local emergency planning committees” Havir added. “Preparedness is a big part of response. It’s not just showing up, it’s having someone on scene that knows what they’re doing.”