Unofficial results from the Secretary of State’s Office show Lesko, a Republican, received 52.6 percent of the vote to Tipirneni’s 47.4 percent of the 174,513 votes cast – the slimmest margin of victory for the GOP since the district’s boundaries were drawn in 2012.

Experts said Republicans statewide should take the results in a GOP stronghold as a warning sign for fall.

Democratic strategist Rodd McLeod called the race “a strong indicator that politics is shifting under the Republican’s feet.” And Republican political consultant Jason Rose said state Republicans have to “pretend and prepare as if the end of the political world is at hand.”

But representatives from the Lesko campaign said they met their goal.

“Debbie Lesko is congresswomen-elect, and that was the mission,” said Barret Marson, her campaign spokesman, who promised that Lesko would “work hard for the next six months to improve her popularity by November.”

Tipirneni has indicated that she will run again in November when the seat is up again, but representatives from her campaign did not respond to requests for comment Wednesday.

The seat came open in December when Rep. Trent Franks, R-Glendale, abruptly resigned midway through his eighth term when faced with a House ethics probe over allegations of sexual harassment. Franks never won less than 63 percent of the vote in the district, where President Donald Trump defeated Democratic presidential nominee Hillary Clinton by a 21 percentage point margin in 2016. 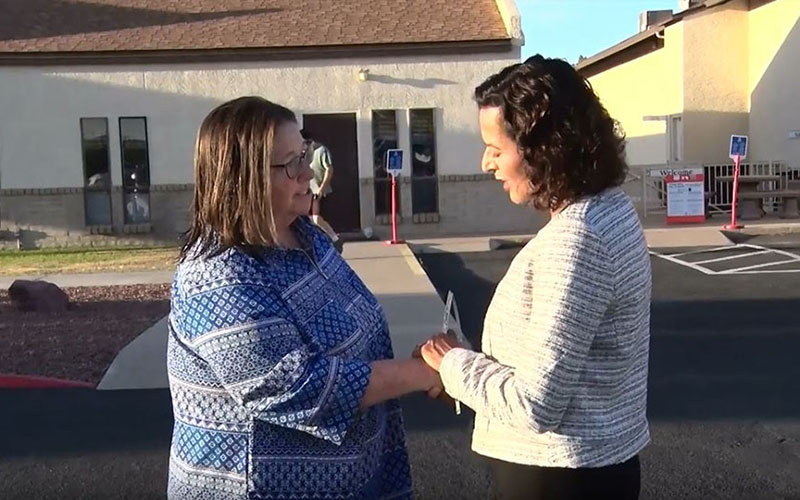 Leah Askarinam, a reporter at Inside Elections, said Democratic gains in the 8th District race were in line with other special elections around the nation since Trump’s election.

“For the most part, when it’s an open seat Democrats have outperformed Hillary Clinton’s 2016 numbers,” said Askarinam. “Republicans in Arizona know to take Arizona seriously” now, she said.

Rose said GOP difficulties started with Trump, but said Arizona Republicans have created their own set of problems.

McLeod said that Republicans will have issues in Arizona, a state that is “moving in a Democratic direction.”

“Yesterday’s results show that Republican voters and conservative independents are pretty fed up with the Republican Party,” McLeod said.

Tuesday’s results will not be certified until May 21, although the state will send the results to Congress as soon as all the votes are counted. Elections officials said that process will take at least a week.

Lesko could be sworn in any time after the results reach Washington. While she conceded Wednesday morning, Tipirneni ended the statement by saying, “Now, on to November.”

Experts say November could be a “wave election” that sees Democrats regain control of the House. Rose said the “wave is especially big for the party of blue this year.”

Askarinam warned that it is too early to call the upcoming midterm a wave election.

“Obviously, momentum is on the Democrats’ side,” she said, “but it’s only April.”

Rose also noted that while Lesko will still have issues to deal with come November, she will also go into that race with “the power of incumbency to show her mettle and show her standing.”

McLeod agreed that November is too far away to make any predictions, but is hopeful about Tipirneni’s chances, especially after the way the special election played out. Analysts expected Democratic support in the special election, “but instead of taking place at volume level four they took place at volume level eight, and if you crank that volume to 10, Debbie Lesko loses in November.”

He knows Tipirneni face an uphill battle in any rematch but said the margin of victory Tuesday has changed the complexion of that race.

“I don’t think it would be smart for anyone to expect everything to go back to the way it was,” when November rolls around, McLeod said.