ELOY – After hours of anxious waiting, family, friends and supporters of immigrant and reproductive rights activist Alejandra Pablos got the good news Thursday night: She is to be released on bond from the Eloy Detention Center.

Pablos, who was detained by U.S. Immigration and Customs Enforcement agents in March, is a member of Mijente, a pro-Latinx organization, and the National Latina Institute for Reproductive Health.

Jacinta Gonzalez, Pablos’ Mijente co-worker, who attended the hearing, said only 15 supporters were allowed in.

“We were able to read him (the immigration judge) some of the letters of all of the supporters from across the country,” Gonzalez said. “Read about the arrest that revoked the (initial) bond, which was just an arrest for immigration rights, a peaceful protest earlier this year.”

The protest Gonzalez mentioned took place in Virginia, where her supporters said she was detained by ICE “in retaliation” for challenging the Department of Homeland Security. According to Rewire News, Pablos had lost her legal permanent resident status two years earlier because of a drug-related arrest.

Pablos’ supporters said she turned her life around after that, dedicating herself to activism. 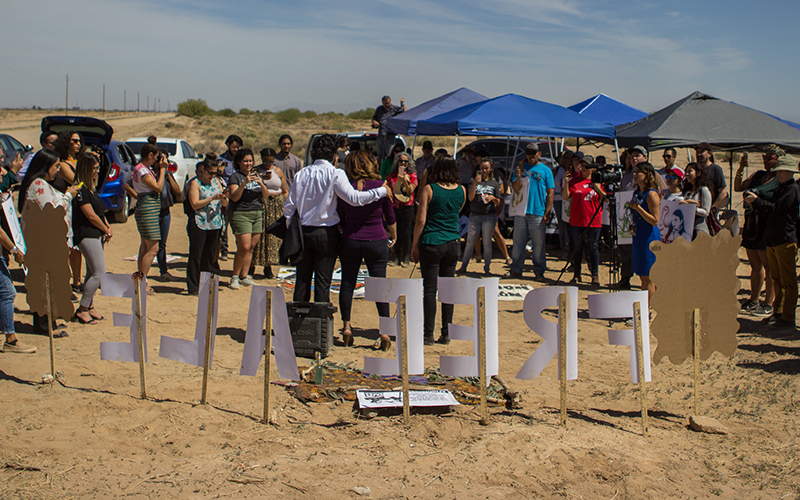 Activists stand in support of Alejandra Pablos, who was detained March 7 by Immigration and Customs Enforcement agents. A judge on Thursday ordered Pablos released from the Eloy Detention Center on $8,000 bond. (Photo by Miles Metke/Cronkite News) 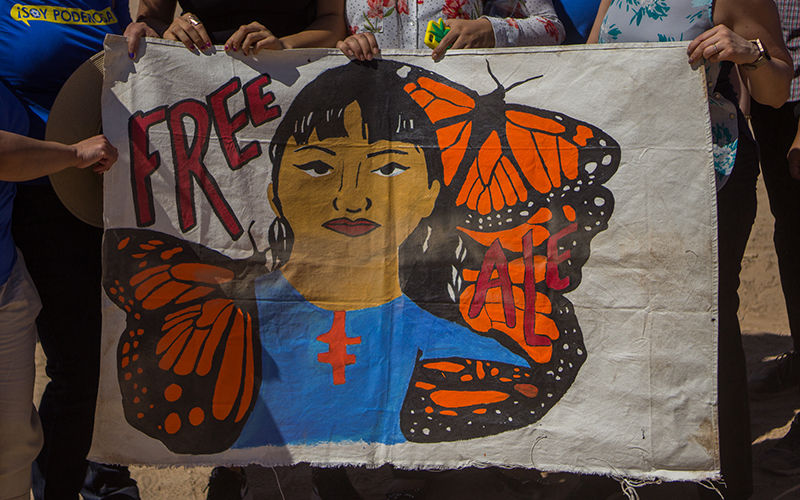 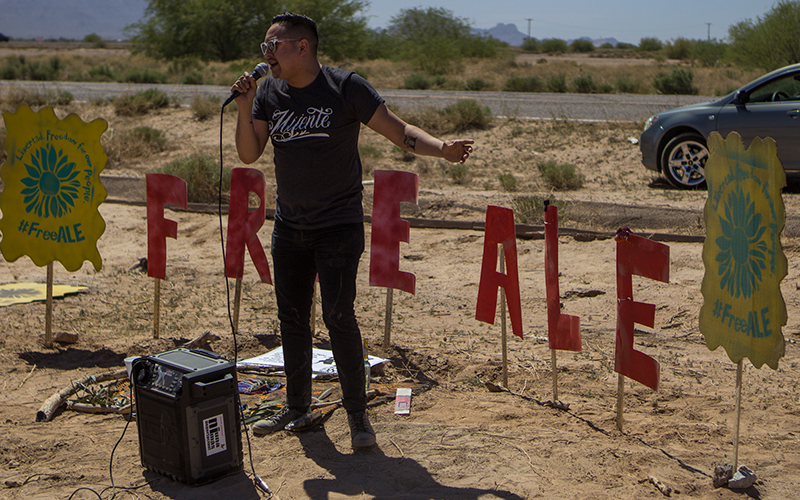 A member of the group MiJente speaks to a group of activists showing their support in front of the Eloy Detention Center. (Photo by Miles Metke/Cronkite News)

“The judge did not really value those arguments because he gave her the same bond ($8,000) that she had before.”

However, ICE can appeal the decision within the next 30 days. 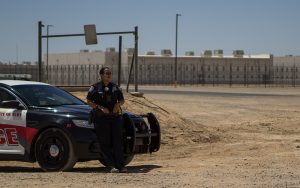 A police officer watches activists supporting the release of Alejandra Pablos, who was detained by Immigration and Customs Enforcement agents March 7. (Photo by Miles Metke/Cronkite News)

“ICE reserved the right to appeal and they can try and block us from paying the bond”, Gonzalez added. “So we’re trying to do all of the work right now to pay the bond to get her out. It’s very scary to know that the federal government can retaliate against us at any moment, but we’re still pushing forward and we hope that we’ll have her with us soon.”

“That’s a reality, but I think we have to have faith,” Magaña said. “We’re trusting that God is going to provide, and he’s going to just give me my sister back.”

Pablo’s mother, Rossy Espiru, was someone who kept the faith as well, saying she knew deep down her daughter would be released.

“Ale is free and we always had that hope,” Espiru said. “We were very, very sure. We had a feeling that everything was going to turn out well. Very optimistic. Thank God and all of the organizations, support from everyone. Very blessed.”

Nancy Cardenas Peña, a co-worker of Pablos’ at the National Latina Institute for Reproductive Health, traveled from out-of-state to show her support.

“I think it’s incredibly important for people to know what a great person Alejandra Pablos is. She is an activist in both reproductive healthcare and immigration spaces and she has done so much for us,” Peña said.

“We mostly want people to know how much Alejandra has been doing for this community. She has lived in Arizona. She works in Virginia. She basically works all around the United States, and we can see that with all of the people who are here supporting her,” she said.

“We just want to let Alejandra know and the rest of the community that they are not alone in this.”