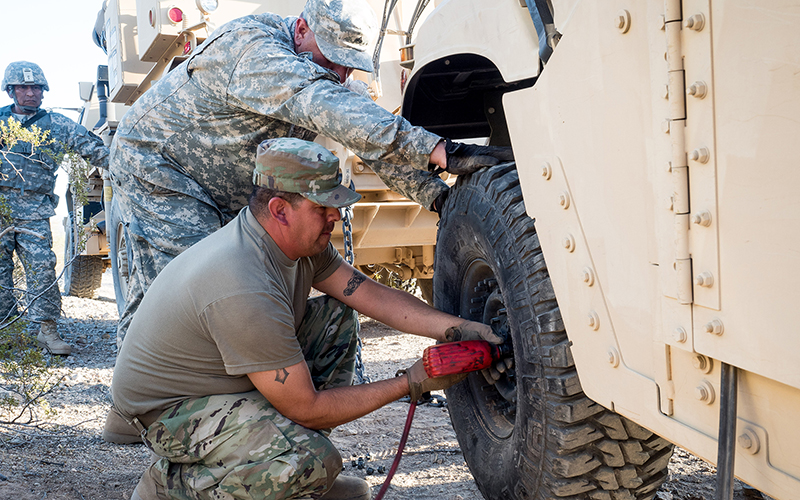 WASHINGTON – The National Guard will send half as many troops to the border, who will serve longer and engage in limited support roles – but not work on a border wall, officials said Monday.

At a briefing Monday, officials from the Department of Homeland Security, the National Guard and U.S. Customs and Border Protection said they now expect to send roughly 2,000 troops to the border, half the 4,000 that President Donald Trump had suggested.

He said military officials “learned their lesson” from previous operations, including the Bush administration’s Operation Jump Start, when Guardsmen took a much more active role.

“There is a lesson learned from Jump Start, because there was a force-protection element that was a part of that,” Vitiello said Monday. “The lesson learned here is that they are not going to be in that similar kind of role or high-threat environment.”

The officials estimated there are more than 900 Guardsmen on the border: 250 in Arizona, close to 650 in Texas and roughly 60 in New Mexico. Arizona Gov. Doug Ducey said last week that he plans to have 338 Arizona troops on the border soon as part of Operation Guardian Shield.

Guardsmen deployed to the Yuma and Tucson sectors of Customs and Border Protection were sent on 31-day orders, but state officials have said those orders could be extended. Federal officials said Monday that the first troops will be now deployed at least until Sept. 30, the end of the fiscal year, at which point the National Guard will “re-evaluate priority needs.”

“We are planning on the 30th of September, or the end of the fiscal year, to start re-evaluating and planning if we need to go beyond that,” said Lt. Gen. Daniel R. Hokanson, vice chief of the National Guard Bureau.

Hokanson said the Guard has been able to meet its needs with soldiers from the four southern border states and does not expect to have to tap units from other states. He said the Guard is “taking volunteers at this time and are going to fill this as we continue to develop where exactly they are going and support needs.”

The troops are being deployed under Title 32, which means they are federally funded but still under command and control of their respective governors.

Robert G. Salesses, the deputy assistant secretary of Defense for Homeland Defense Integration, said there is no current estimate for the operation’s total cost, which will be funded out of “under-allocated” sections of the Pentagon budget.

Hokanson said he is “extremely confident” in the ability of the deployed troops, who represent just a fraction of the 450,000 total troops in the National Guard.

“We think, as we have done in previous operations on the border, that we will be able to handle this,” he said.

Critics have expressed fears that the deployment will lead to further militarization of the border, and the Mexican government said it was assured by Homeland Security Secretary Kirstjen Nielsen that Guardsmen on the border would not be armed.

Vitiello said the roles that CBP has chosen for the mission are “merely support roles” and will not involve work on any infrastructure involved with the president’s proposed border wall. Instead, Guardsmen will be engaged in tasks that free Border Patrol agents so they can focus on security issues.

“It starts with the assignment – none of the roles we have asked for are going to require soldiers to engage in law enforcement roles,” Vitiello said.

“They are going to be supporting border operations, aviation support, watching camera rooms, radio dispatch, logistics and brush clearing. They will not put be put in harm’s way and they will not be put in assignments that requiring enforcing the law as a general setting.”