PHOENIX – The Arizona National Guard announced Wednesday it is sending 338 ground and air Guardsmen to the border by Monday in what has been named Operation Guardian Shield. The main objective is to provide support for the Department of Homeland Security’s mission to secure the U.S.-Mexico border, with a mission end-date of Sept. 30.

A previous version of this story had an incorrect title for Maj. Gen. Michael McGuire, the adjutant general of the Arizona National Guard. The story here has been corrected, but clients who used earlier versions are asked to run the correction found here.

Maj. Gen. Michael McGuire, the adjutant general of Arizona and director of the Arizona Department of Emergency and Military Affairs, said the Guardsmen will operate from existing Border Patrol stations. There will be 60 troops in Nogales by Friday, he said, with the rest in place by Monday.

“Ultimately, our objective of this mission is to surge badges to the border, put more enforcement agents out there,” McGuire said.

The Guardsmen also will be in position to “mitigate any potential loss of life of people” in the desert, McGuire said.

This isn’t the first time the Arizona Guard and Customs and Border Protection have worked together. In 2006, the Guard took part on Operation Jump Start, which was ordered by then President George W. Bush to enforce border construction and security along the U.S.-Mexico border so the military could observe and report their findings.

McGuire said the only difference between the two missions is the technological advancements that have occurred from 2016 to 2018, but that doesn’t mean there won’t be challenges in Operation Guardian Shield. 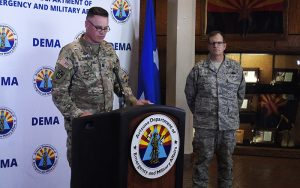 “The biggest obstacles that I see are, essentially, surging these additional folks in the community,” he said.

“We have to have opportunities to house, feed and sustain the soldiers that are out there,” McGuire said. “We are working through lodging contracts.”

According to McGuire, finding housing for the Guard could serve as a bigger obstacle than the eight-hour shifts they will complete in support of Customs and Border Protection employees.

Regarding the wall itself, McGuire said he does not know of any plans to build additional fencing, but there have been requests to repair damage along the border wall.

He added the 338 Guardsmen are just the initial wave. President Donald Trump has requested up to 4,000 troops dispatched to the southern border.