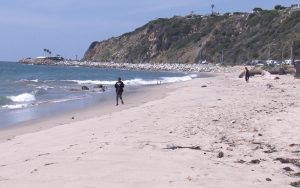 Litter – specifically plastic – has become such a problem, the Malibu City Council voted in February to prohibit the city’s 70 or so restaurants from supplying customers with plastic utensils and straws. On June 1, they’ll have to switch to biodegradable options, such as glass, metal and paper.

Malibu is the third California city to ban disposable plastics, following Manhattan Beach and Santa Cruz. Seattle will make the change in July, according to The Seattle Times.

In 2016, Arizona lawmakers passed a law that prohibits cities from regulating the use of plastic bags and other plastic containers, according to azcentral.com. Legislators said the law protects small businesses from economic hardship.

The attorney general even told officials in Bisbee, which had passed a plastic bag ban, that the state could withhold tax revenue because the ordinance conflicted with state law.

But public officials in California’s coastal cities said the ban is critical to keep their beaches clean.

Experts estimate more than 5 trillion pieces of plastic are floating on oceans around the world, and it’s linked to improperly discarded trash on coastlines, according to research by Five Gyres, a nonprofit advocacy group that studies plastic pollution.

Ron Anthony of Santa Monica said he’s fed up with the trash.

“I swam out 50 yards, dove underneath, and there was garbage at the bottom – all plastic straws and plastic bottles,” he said. “It was bad.”

Malibu was one of the first California cities to initiate a single-use plastic bag ban in 2008, with the rest of the state following in 2014.

“That’s what I really want people to do: Keep a little kit with a fork, knife, spoon and straw in your car,” Councilwoman Laura Zahn Rosenthal said.

Malibu spokesman Matt Myerhoff, who also works as a volunteer to clean up beaches, said he has noticed a reduction in plastic bags since that ban went into effect, but other types of plastics have increased.

Starting June 1, about 70 restaurants in Malibu, California, will have to switch to biodegradable options, such as glass, metal and paper. (Photo by Brooke DeGumbia/Cronkite News)

“Of the things I picked up, about 90 percent of them were plastic – little bits and pieces of polystyrene foam … mostly from coffee cups and takeout food containers,” Myerhoff said.

Anthony, who owns Rejuice in Santa Monica, recently changed his juice bottles from plastic to glass. But because of the cost of plastic alternatives, he doubts they’ll become mainstream.

“Before completely switching, I first started giving customers the option between plastic and glass, and they chose the cheaper option: plastic,” Anthony said. “Glass is triple the cost of plastic.”

Myerhoff said Malibu city officials are optimistic the new ordinance will be as effective as the plastic bag ban.

“After a number of years, everyone drives around with a reusable shopping bag in the back of their car,” he said. “And now at the supermarket, you see everyone using them. It’s pretty rare for someone to not have anything like that.”

When plastic ends up in water, it turns into “micro plastic” and takes about 450 years to fully disintegrate, according to the U.S National Park Service. The World Economic Forum estimated that by 2050, the ocean will contain more plastic than fish.