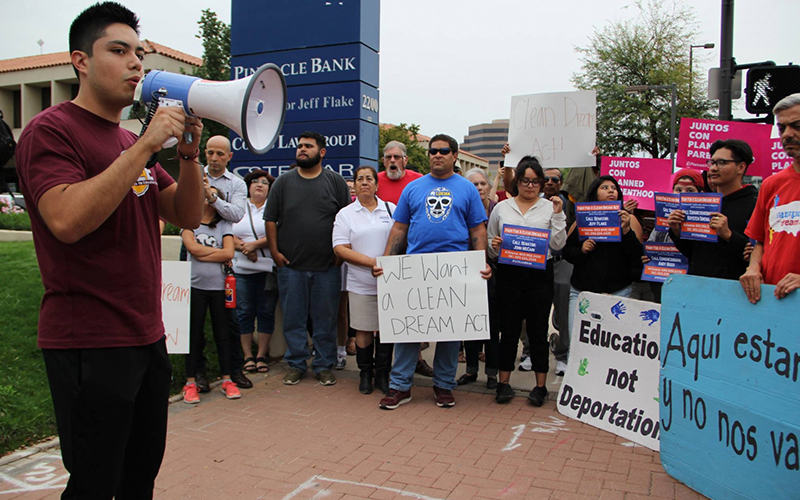 Oscar Hernandez, a public policy student at Arizona State University, speaks at a rally in support of DACA recipients in November 2017. The Trump administration’s decision to end the program is one of many factors motivating Latino activism. (Photo Courtesy of One Arizona)

PHOENIX – Leaders and activists in the Arizona Latino community are determined to flip Arizona from a red state to a purple state in November by mobilizing Latino voters.

The Nov. 6 general election, which in Arizona includes the governor’s race, is considered a possible turning point by some Democratic state and local politicians.

Arizona has been considered solidly Republican for decades, but results in the 2016 election were nearly equally divided between Democrats and Republicans. President Donald Trump won 49.5 percent of the votes; Hillary Rodham Clinton won 45.4 percent.

Those numbers convinced David Garcia, a Democrat running for governor, that Arizona could be purple by the end of this year.

Garcia also is confident his ties with the Latino community and progressive stance on education and immigration will drive Latino voters to the polls to vote for him and change the state’s political landscape.

Arizona saw surge in Latino activism and grassroot organizations in 2010 when controversial Senate Bill 1070 was passed and signed into law. It allowed local law enforcement to question anyone about their immigration status based on the assumption they were undocumented. The U.S. Supreme Court later found some provisions of the Arizona law to be unconstitutional because they intruded on the work of the federal government. 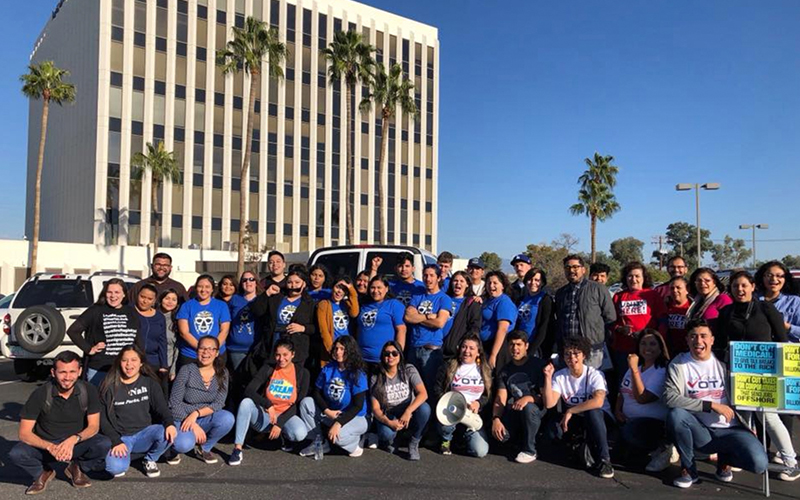 Members of LUCHA – Living United for Change in Arizona – and Mi Familia Vota, a voter registration group, gather for a Tucson registration drive in 2016. (Photo Courtesy of One Arizona)

Alejandro Larios, a Democrat campaigning for a House seat in Legislative District 30, also hopes to get people excited to vote for something, not against.

According to data from the Arizona Secretary of State, voter turnout increased by 27 percent from 2014 to 2016 in general elections. However, Larios believes there is still more work to be done to engage Latino voters.

“Democracies function when people are engaged, not when only a few decide for all of us,” he said. “Right now, as a community, we are not engaged as we should be.”

Organizations like One Arizona, a coalition of grassroot groups focusing on civic engagement in the Latino community, traveled across the state during the 2016 presidential election and registered thousands of people to vote.

“Our goal this year is to register 200,000 people to vote across the state,” said Montserrat Arredondo, director of One Arizona.

“Though we want as many people to get out and vote regardless of political affiliation, we are spending most of our efforts in communities where there is a higher Latino and black population.”

“It’s not just registering to vote, but also making sure that people understand the entire political process,” Ojeda said. “Instead of waiting for them to come to us, we’re going to them.”

Many Latinos are eligible to adjust their status and begin the process to become citizens, she said, adding that Trump’s election has been a motivator for many.

“There’s a large part of the community that are residents and they don’t become citizens because they don’t know where to start,” Ojeda said. “A big effort to increase the Latino vote is to make sure that people become citizens an register.”

Latino youth are leading voting registration efforts across the state.

“It’s exciting that more Latino youth are getting so involved, but this is not new,” said Garcia, the gubernatorial candidate. “Our Latino youth have been involved since SB 1070. They have been out marching and registering people to vote and getting involved in pretty big numbers.”

In addition to winning a District 30 House seat, Larios wants to empower and motivate young people in his west Phoenix district to be politically active.

“I wanted to energize the youth in my campaign,” he said. “Here they are, registering people to vote, passing out our literature, signing petition forms. I saw an opportunity to do something bigger, to give back and to make sure that kids like me who grew up in rough neighborhoods don’t feel defeated and are given the resources so that they can continue to break the cycle of poverty.”

Garcia and Larios agree that Latino youth are setting the future of Arizona politics, just as they in 2010 fighting SB 1070.

“Arizona will change long term when the voting population gets younger and more diverse,” Garcia said. “That’s the path to changing Arizona.”