A Kearns Canyon school district got rid asbestos in some of its buildings.

And South Tucson redeveloped areas once home to blighted hotels and gas stations.

All three used federal grant money from the Brownfields Program, run by the U.S. Environmental Protection Agency, that supplies hundreds of thousands of dollars to clean up, redevelop or demolish properties contaminated by hazardous substances or pollutants. The EPA estimates there are more than 450,000 such properties, known as brownfields, in the U.S.

This year, the EPA gave the Arizona Department of Environmental Quality about $750,000 to distribute to projects throughout the state.

One of the grants recently went to Kingman, which will use more than $150,000 to remove asbestos and mold from a city office building built in 1963.

Community members plan to turn it into a veterans assistance headquarters, including housing space for veterans. Some services will be available this summer, the rest should be running by summer 2019.

There’s a critical need for such services in Mohave County, which has the highest rate of veteran suicides in Arizona, said Pat Farrell, president of the Jerry Ambrose Veterans Council, the group that bought the structure from the city.

The city originally could not sell the building because of the potential public health dangers. So when Farrell learned about the brownfields grant, he jumped on the opportunity to apply. 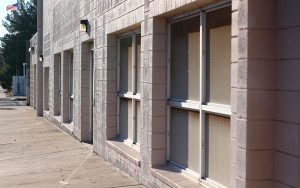 Kingman will use a brownfields grant to remove asbestos and mold from a 55-year-old office building that eventually will provide services to thousands of veterans in northwest Arizona and parts of California and Nevada. (Photo by Nicole Hernandez/Cronkite News)

By July 2019, the structure will become livable spaces to house dozens of veterans. The building will provide services to the thousands of veterans in the northwest region of Arizona and parts of Nevada and California beginning this July.

Farrell said the grant made the project possible: “It allowed us to open the door to returning this building to its former glory.”

The Arizona Department of Environmental Quality is working on nine brownfields grant projects, and it completed 20 last year. Among those projects were the demolition of an old library in Camp Verde and development of a community center in Duncan.

“There’s a lot of benefit to the program in the sense that we’re abating sites that are not used to their fullest intent,” said Jennie Cure, who coordinates the grants for the state. “And also, with these sites cleaned up, the people who come to these downtown areas on a regular basis feel that someone cares about their community.”