GRAND CANYON NATIONAL PARK – A plaque dedicated to two Arizona icons who have championed the Grand Canyon – Sen. John McCain and the late Rep. Morris Udall – was unveiled in an emotional ceremony Wednesday on the South Rim.

The plaque, sponsored by the National Park Service and the Grand Canyon Association, honors McCain and Udall’s commitment to the park, such as their promotion of visitor safety, preserving the Colorado River that carved the canyon and helping protect wildlife within the park’s boundaries. 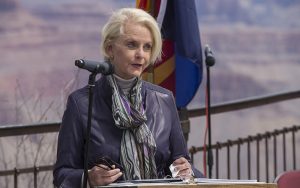 Cindy McCain was moved to tears as she read a letter from her husband, Sen. John McCain, on his appreciation for the Grand Canyon and his friendship with the late Rep. Morris Udall. She spoke at an event unveiling the design for a plaque honoring the men. (Photo by Jenna Miller/Cronkite News)

A specific location for the plaque has not been determined, but it will be outdoors on the South Rim, officials said. No date for installation has been set.

Cindy McCain, who spoke at a ceremony unveiling the plaque’s design, said she was moved by the tribute.

“It’s heartwarming, and it’s such an honor,” she said against the backdrop of the canyon from Mather Point.

Udall served as a congressman from Arizona for 30 years. For nearly 15 of those, he chaired the House Committee on Natural Resources, which considers legislation on national parks. He died in 1998 at age 76.

McCain, who’s serving his sixth term in the U.S. Senate and was diagnosed last year with an aggressive form of brain cancer, started in the House and sat with Udall on the natural resources committee in the 1980s. 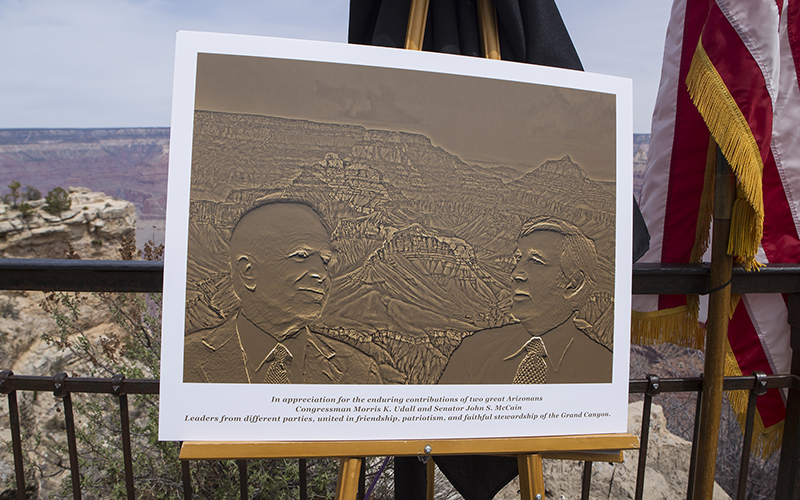 A plaque honoring Sen. John McCain and late Rep. Morris Udall will be installed along the South Rim of the Grand Canyon to honor their dedication to protecting the park. Family members and politicians spoke of the two men’s long friendship and partnerships on important issues. (Photo by Jenna Miller/Cronkite News)