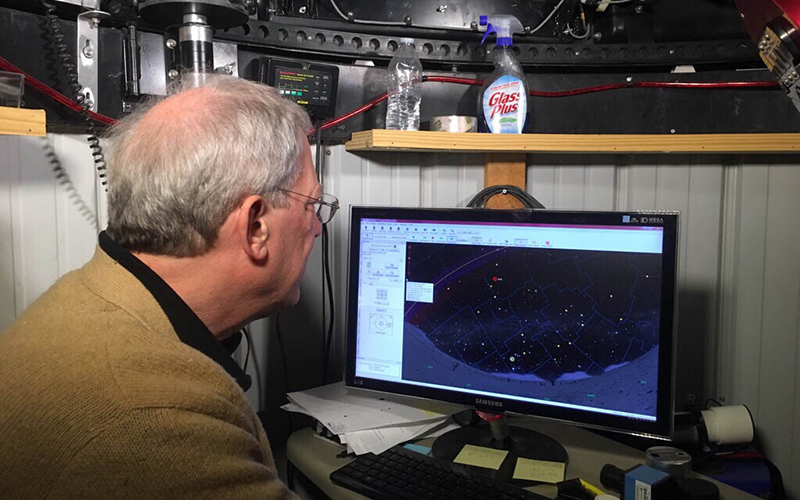 Ted Blank observes the night sky in the observatory in his backyard. In Fountain Hills, there are three homes with observatories in their backyard, according to Blank. (Photo by Nicole Randock/Cronkite News) 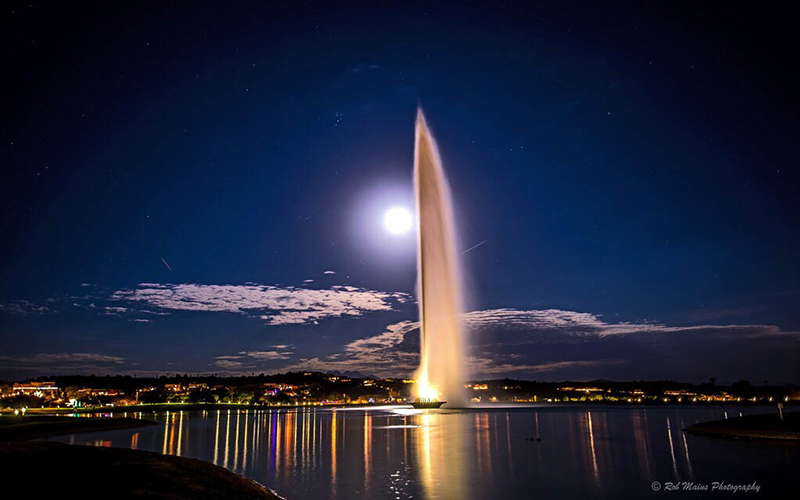 Fountain Hills is home to more than 23,000 residents. The fountain, built in 1970, is one of the world’s tallest man made fountains, according to the city of Fountain Hills website. (Photo courtesy of Rob Mains)

FOUNTAIN HILLS – When Ted Blank sits in his backyard in Fountain Hills, he uses his own observatory to view the night sky. The skies are dark here, the stars are bright and the McDowell Mountains protect the town from the artificial glow of lights from Phoenix.

This is part of the reason Blank and his wife moved here. Their tour of potential cities ended when they visited Fountain Hills.

“I was hooked. We have five more cities on our list, but this’ll do,” said Blank, co-founder of the Fountain Hills Astronomy Club.

Fountain Hills is the fourth community in Arizona and only the 18th in the world to receive a “dark sky” designation from the International Dark Sky Association, which is based in Tucson. It defines dark sky communities as those dedicated to preserving the night sky through lighting ordinances, as well as providing education and community support.

“What I’ve found over the years is that everyone still carries somewhere inside of them their original childlike curiosity about the night sky,” Blank said. “We want to offer them an opportunity to let that curiosity lead them to becoming more familiar with the stars, planets and constellations.

“The night sky is as much a part of our home on Earth as the ground under our feet.”

The dark sky association says communities are selected after a rigorous application process, in which they must demonstrate community support for the dark sky designation.

“There seems to be great support among the entire community,” said Joe Bill, the co-chair of the Fountain Hills Dark Sky Association. “We presented to pretty much all the clubs and organizations in town. They all were very supportive. This has been successful because of that, because of the unanimous support of our town counsel. That has been critical.”

In 2016, Fountain Hills adopted an outdoor lighting ordinance requiring lights to be shielded so that they shine only where light is needed. Bulbs were changed from a blue hue to an orange hue to prevent light pollution. The town invested about $23,000 to upgrade the LED lights within town.

Fountain Hills residents can see the Milky Way nearly every night, though nearly 80 percent of people living in North America cannot do the same, according to a study published in Science Advances. 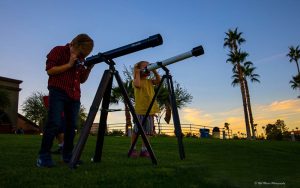 To celebrate the night sky, the Fountain Hills Astronomy Club along with Fountain Hills Library have been putting on “star parties” for the public for the past three years.

“We can get anywhere from 25 visitors to 250, depending on the temperature and what’s on TV on any particular Wednesday night,” Blank said. “Everyone is welcome, and we encourage people who have telescopes to bring them to share the views with the public.”

With the dark sky designation, Blank said, this may be a good time to consider an observatory in Fountain Hills.

“On our sign-up sheets for the Astronomy Club email list, I have a checkbox titled, ‘I would like to see a public observatory in Fountain Hills,'” Blank said. “Over the last three years, 580 people have signed up for the mailing list and 85 percent of them wrote ‘Yes’ or put a check mark in that box.”