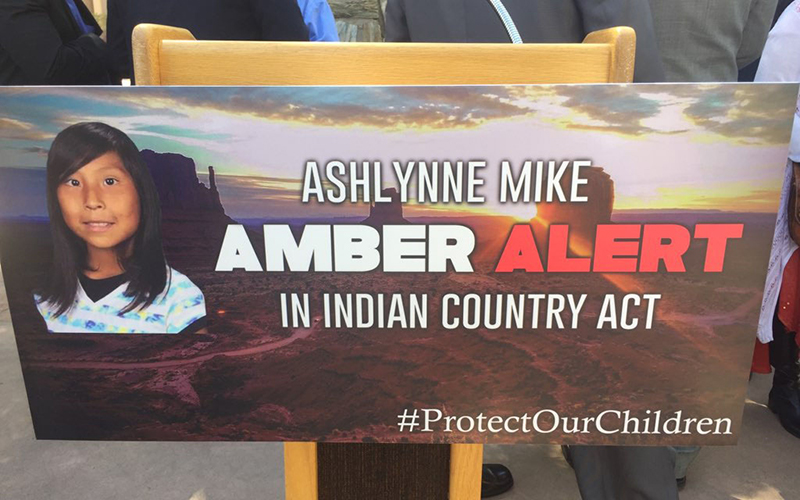 Family and community members spoke at a news conference announcing Congress had passed an Amber Alert system on Native American reservations named for Ashlynne Mike, who was abducted and killed in 2016. The bill awaits the signature of President Donald Trump. (Photo by Tristan Ettleman/Cronkite News)

PHOENIX – Congress has passed legislation that brings the Amber Alert system for abducted or missing children to Native American reservations, a move to prevent deaths like those of 11-year-old Ashlynne Mike.

Ashlynne’s parents and Rep. Andy Biggs, R-Arizona, advocated for the Ashlynne Mike Amber Alert in Indian Country Act to close a loophole in the system’s funding that left tribes ineligible for support, he said at a news conference at the state Capitol. The measure awaits President Donald Trump’s signature.

Supporters of the bill, named after a Navajo girl was abducted and killed in May 2016 in New Mexico, said her death could have been prevented. It took tribal police, working with limited resources, five to six hours to notify the public that she was missing.

Hours later, investigators found her body. Her brother, who also was abducted, was still alive. Both were badly beaten.

“My daughter would still be alive,” said Pamela Foster, Ashlynne’s mother, crying as she described spending hours in the nation’s capital to fight for the measure. “I still can’t get over the loss. The pain is intense.” 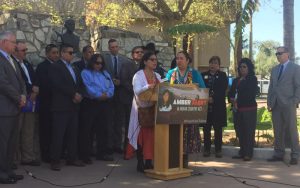 Biggs sponsored the bill along with Sen. John McCain, R-Arizona, and more than 40 other elected leaders. The new Amber Alert – which uses radio, television, text alerts and freeway signs to quickly alert the public when a child goes missing – means other children on America’s reservations may be saved.

“They turned this grief into action that is positive,” he said of Foster and the girl’s father, Gary Mike.

Foster said she discovered as she worked to get the Amber Alert system set up that many people didn’t know the system did not apply to reservations, including senators and representatives she spoke to in Washington. But she’s joyful that Congress passed the measure.

“Words cannot express the gratitude I have,” she said. “I want to stop the violence against women and children.”

“This bill is absolutely going to save lives,” said Crotty, adding it had bipartisan support.

Tom Begaye was sentenced last year to life in prison for sexual assault and murder in the case.