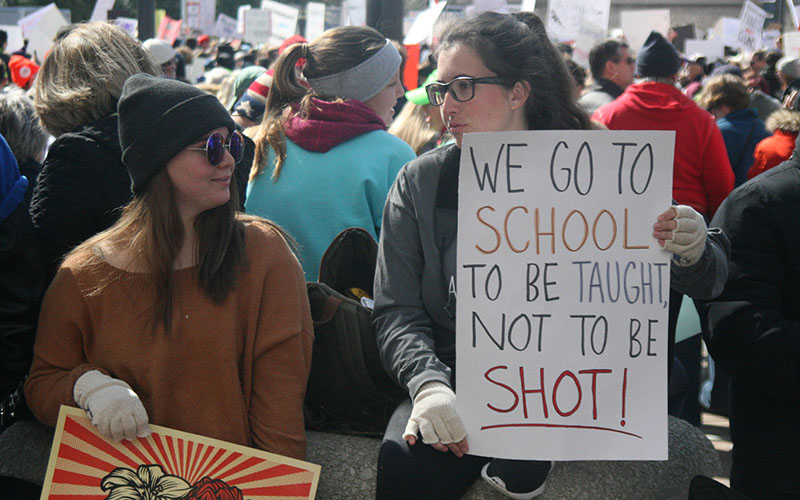 Best friends Calista Hawkens and Morgan Miller, both 16, drove together from their home in Baltimore for the march. “It’s beyond inspiring to know that it was kids who were in our grade who made all of this possible,” Hawkens said. (Photo by Kyley Schultz/Cronkite News) 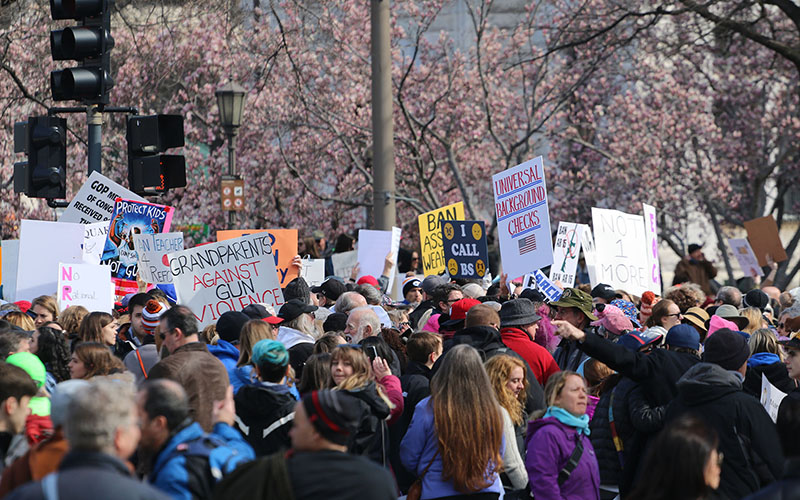 The sign-carrying crowd makes its way down Pennsylvania Avenue near Sixth Street in Washington. The avenue was closed Saturday for more than 10 blocks to make room for a crowd estimated in the hundreds of thousands. (Photo by Philip Athey/Cronkite News) 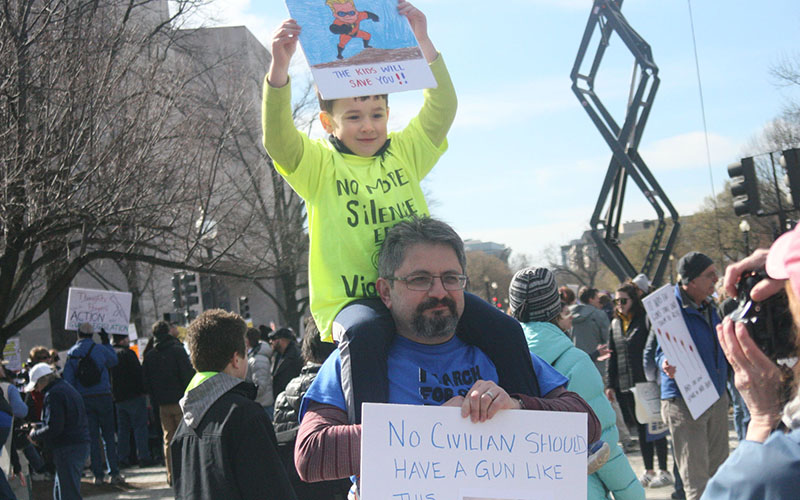 Dennis Morrison, 49, and his son, Jack, 6, drove from Portsmouth, Virginia, late Friday to attend the march. “My kid is my everything, and no parent should have to send their child to school thinking they are going to lose them.” (Photo by Kyley Schultz/Cronkite News) 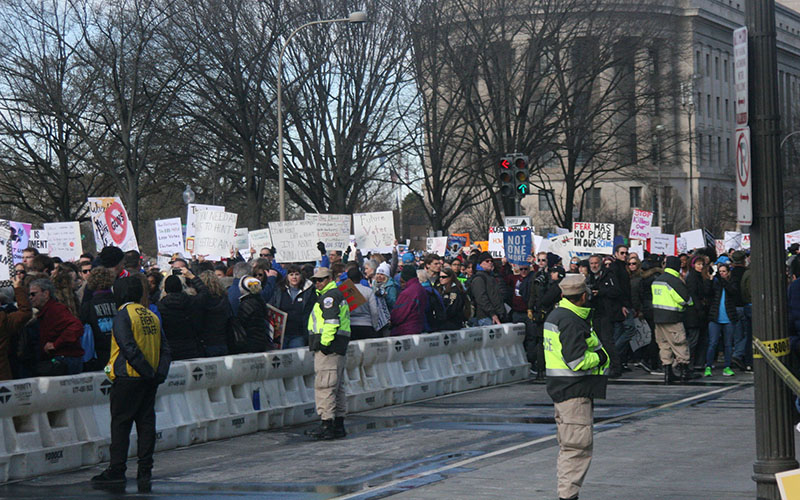 Officers from a number of police departments in the D.C. region were onhand for the March for Our Lives, but there was little call for their services at the largely peaceful event. No arrests were reported by the Metropolitan Police Department by mid-afternoon. (Photo by Kyley Schultz/Cronkite News) 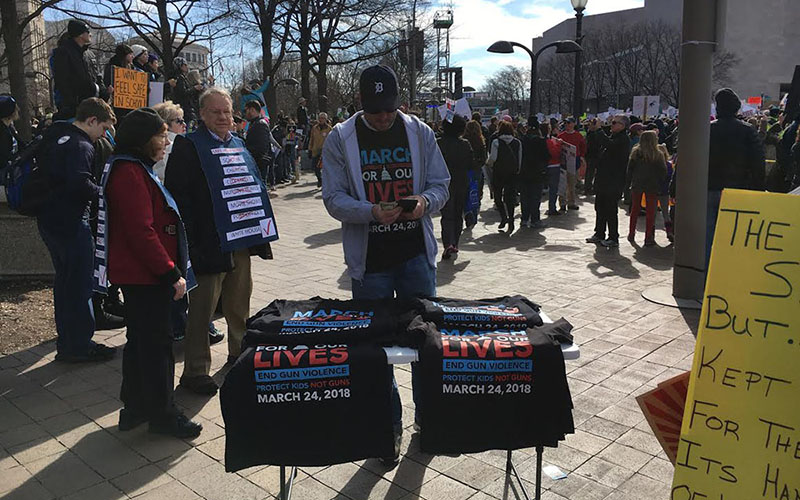 A vendor sells March for Our Lives T-shirts along Pennsylvania Avenue, the main route of Saturday’s march against gun violence. The shirts, for $10 each, were a popular item, but vendors also offered buttons, bags and more. (Photo by Kyley Schultz/Cronkite News)

Patricia Fleetwood, a Philadelphia teacher who attended the march, said she is “tired of doing drills with my students, hiding behind closet doors” because of the threat of gun violence. She thinks the Parkland shooting could be a tipping point in the gun debate. (Photo by Philip Athey/Cronkite News) 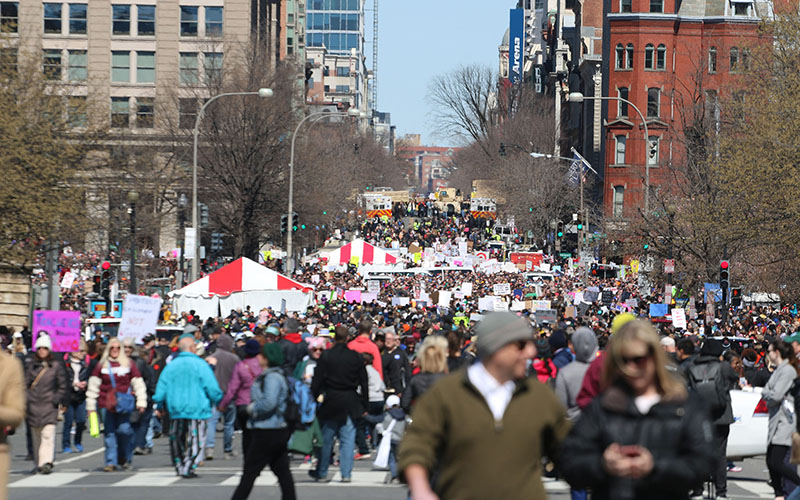 Crowds march down Seventh Street NW, which was lined with medical tents and food trucks for Saturday’s March for Our Lives. No arrests and few problems were reported at the march, which drew a crowd estimated at hundreds of thousands. (Photo by Philip Athey/Cronkite News)

WASHINGTON – The March for Our Lives was organized by students, but the hundreds of thousands who crowded the streets of Washington on Saturday to call for stricter gun regulations represented multiple generations.

“I am a marcher of generations,” said Marsha Davis of Lewes, Delaware, who once marched against the Vietnam War. “I’m out here to support a new generation to really be active in terms of government. And I do hope they vote.”

The demonstration packed more than 10 blocks of Pennsylvania Avenue, with parents pushing strollers and teens carrying colorful, handmade signs – “I don’t want a bulletproof vest to be my school uniform” and “Am I next?” among them – as volunteers passed out signs and stickers saying, “Enough is enough.”

There were no security checkpoints for the march and no counterprotesters obvious in the crowd, which was friendly despite being crammed shoulder-to-shoulder on a sunny and brisk day.

Police were mostly a background presence. As of mid-afternoon, Metropolitan Police said they had not made any arrests at the event. 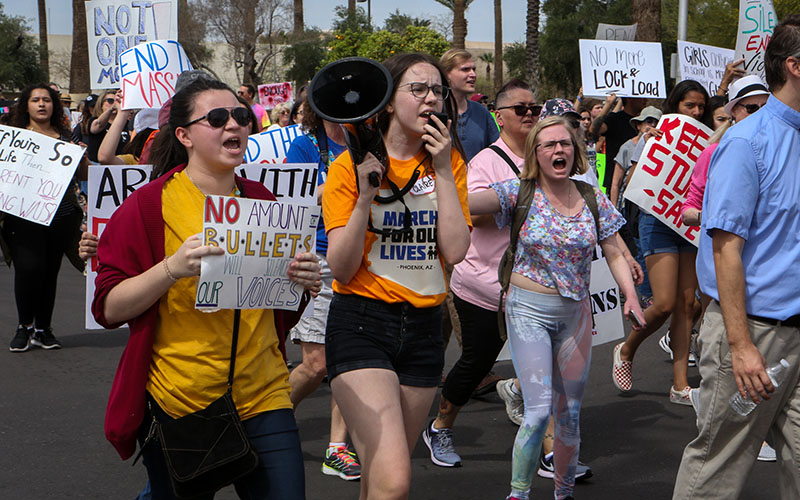 Officials did not release crowd estimate, but the region’s Metro service said it had logged 334,000 subway riders as of 4 p.m., about 2.5 times a normal Saturday ridership. Midday ridership numbers were about half that of the 2017 Women’s March, but Saturday’s crowd still appeared to number in the hundreds of thousands.

Crowds started showing up hours before the scheduled noon program, which included such musical performers as Ariana Grande, Jennifer Hudson and Miley Cyrus and speeches. Most of the speakers were students touched by gun violence, including many from Marjory Stoneman Douglas High School in Parkland, Florida.

The Feb. 14 shooting at Stoneman Douglas left 17 dead and 14 injured, an attack that sparked surviving students there, including Emma Gonzalez and David Hogg, to lead the national movement that culminated in Saturday’s march. The Washington rally was the centerpiece of hundreds of marches around the country, including several in Arizona.

“I think about how Emma Gonzalez is not that much older than I am, and here she is championing a movement,” said Morgan Miller, 16.

Miller and her friend Calista Hawkens drove from Baltimore with handmade signs to be “a part in a revolution.”

“We wanted to be a part of it and let them know that other high school kids are behind them with their full support,” she said.

Sights and sounds from the D.C. march

Sherry Gillis, a teacher from Northern Virginia, said the involvement of young people is what makes this movement different.

“I feel like this generation is our best bet yet,” she said. “It seems like they found their voice.”

Philadelphia teacher Patricia Fleetwood said “children have always been the ones leading the way in our country, I don’t think this time is going to be any different.” Fleetwood called Parkland a tipping point in the gun debate and said she was in Washington because she is “tired of doing drills with my students, hiding behind closet doors, rushing them outside and being afraid.”

Gillis said she worries as both a teacher and the mother of a teenage daughter.

Dennis Morrison said it is fear for the safety of his 6-year-old-son, Jack, that prompted the two of them to drive from Portsmouth, Virginia, to come to the rally.

“He just started school, and every day I drop him off I grow increasingly worried that it might be the last,” said Morrison, who carried Jack on his shoulders. “It’s been amazing being here and having him play with other kids his age who are going to grow up in an era of change.” 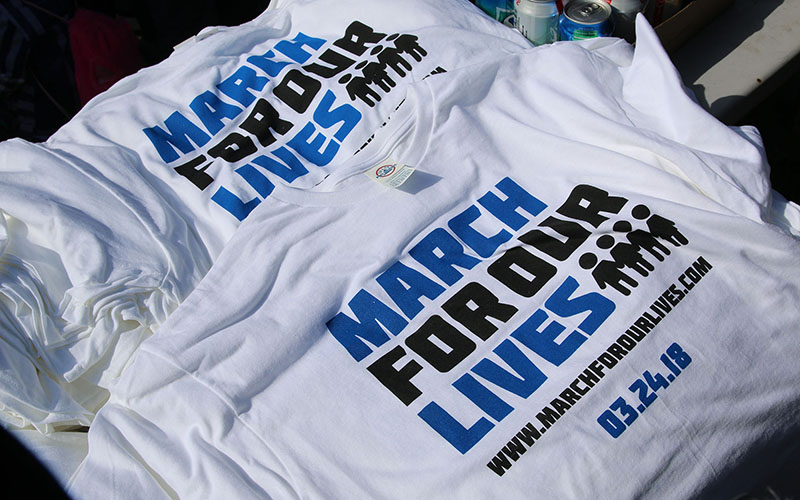 Another T-shirt from one of many vendors working the large crowds at the March for Our Lives. (Photo by Philip Athey/Cronkite News)

Although the overall mood was upbeat, some marchers were angry.

Jonathan Schapiro came from Boca Raton, Florida, just miles from Parkland, “specifically to stand in this march and make it safe for our kids.”

“Why can’t the politicians answer straight whether not to vote for bumpstocks or get rid of automatic weapons,” Schapiro said. “It is no longer safe in the schools.”

But Gillis hopes youth can do what her generation could not.

“I am encouraged to see that these young people understand what it means to be politically motivated, politically active and to make change in this world,” she said. “Certainly my generation failed to do that.”

Hawkens, the Baltimore teen, said her parents were proud of her for attending the march.

“Right before we left, my dad said this reminded him of when he was my age, and to not be discouraged by all the negativity around us,” Hawkens said. She said she believes previous generations failed hers by not creating long-lasting gun control, a failure she hopes will not be repeated.

“I don’t want to be (my dad’s) age telling my kid the same thing about guns,” she said. “We need to do something now.”

Morrison said he hopes Jack takes away a message from the march.

“No matter how small he is, he plays a critical role in history,” Morrison said.