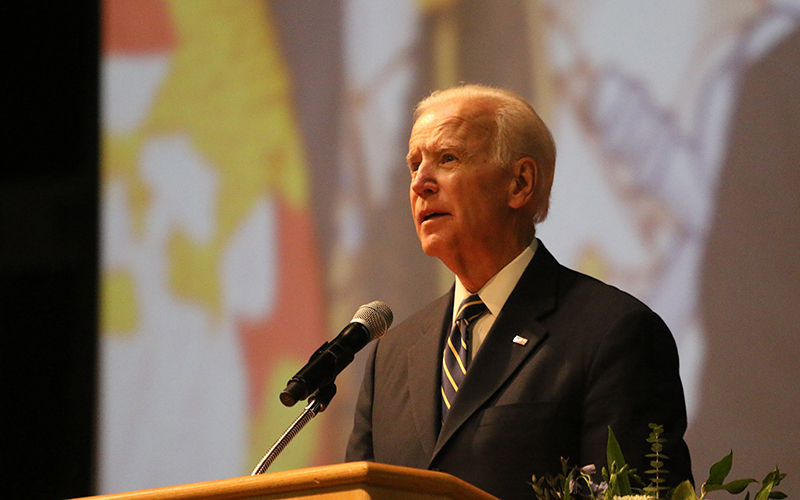 Former Vice President Joe Biden, who introduced himself as a friend of Arizona Sen. John McCain, accepted the Naval Academy honor on behalf of the ailing senator. He said McCain has led a “life of honor, decency, duty and devotion to his country like none other in modern American history.” (Photo by Philip Athey/Cronkite News) 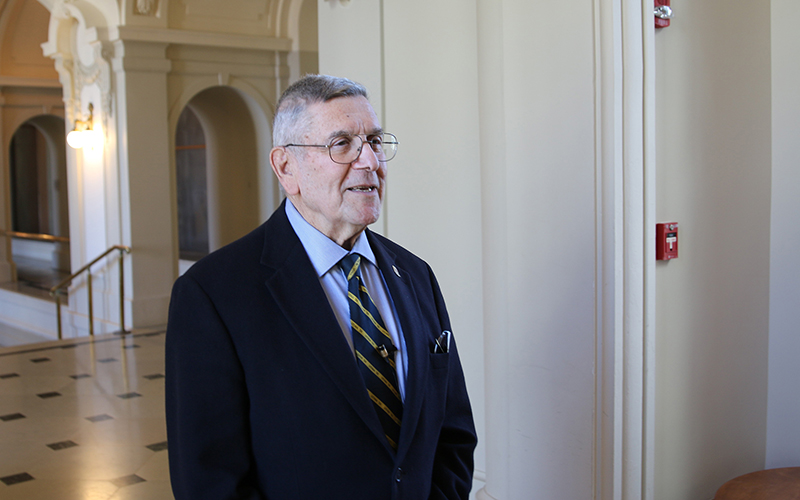 Gordon Gerson, president of the Naval Academy Class of 1958, said that not all class members were well aware of McCain, but after he was captured in Vietnam they “became well aware of him and started tracking him after that.” (Photo by Philip Athey/Cronkite News) 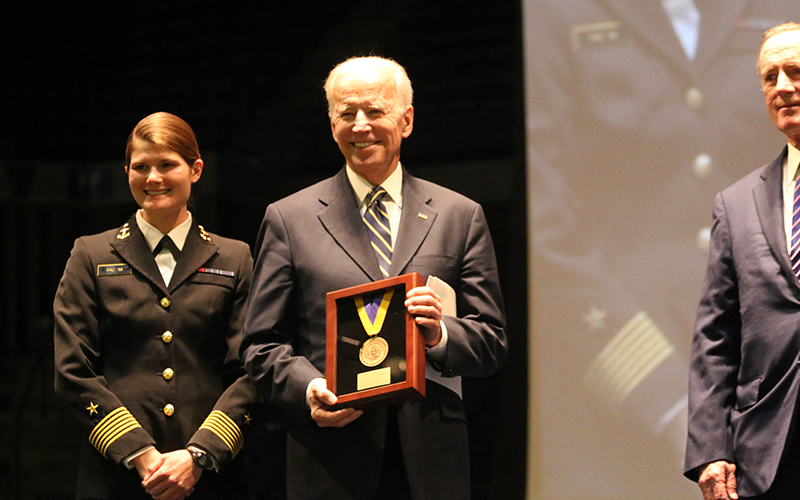 Former Vice President Joe Biden accepted the Naval Academy’s Distinguished Graduate Award on behalf of Sen. John McCain, who remains in Arizona where he is being treated for am aggressive form of brain cancer. (Photo by Philip Athey/Cronikite News)

ANNAPOLIS, Maryland. – Arizona Sen. John McCain was recalled as both a friend and as one of the “most colorful characters” at the U.S. Naval Academy during a ceremony Friday where he was honored as one of the academy’s distinguished graduates.

Former Vice President Joe Biden accepted the Naval Academy Alumni Association’s award on behalf of McCain, who remains in Arizona for treatment of a deadly form of brain cancer.

Biden introduced himself as a friend of McCain, who he said has led a “life of honor, decency, duty and devotion to his country like none other in modern American history.”

McCain announced in July that he had been diagnosed with glioblastoma, one of the most aggressive forms of brain cancer and the disease that killed Biden’s son, Beau, in 2015.

“Like my Beau, John has never bent, never bowed and never, ever yielded,” Biden said. “And he has never given up hope.”

The Distinguished Graduate Award honors living academy graduates who have “demonstrated a lifetime commitment to service, personal character and distinguished contributions to our nation.” McCain was one of six honored this year, the 20th year the award has been given.

McCain is the fifth to be honored from the class of 1958, in which he graduated 894th academically out of 899 midshipmen in the class.

“Beyond our loyalty and love for one another, there’s one more thing John and I have in common,” Biden said. “Our academic records.

“Both of us learned the hard way, learned from experience, although place in class is important, thank God, it’s not wholly determinative,” he said.

Biden wasn’t the only one who joked about McCain’s class standing. Class of ’58 President Gordon Gerson bragged that no other class has had two members win the award who were so far apart in their class standings: Previous recipient Capt. Bruce McCandless finished second in the Class of 1958, before going on to be the first person to make an untethered spacewalk.

Gerson said he did not know McCain while the two were at the academy, but heard about him soon after McCain was shot down and captured during a mission over North Vietnam.

“The first I really knew about him was when he became a POW,” Gerson said, who ultimately became an Air Force officer. “It kind of filtered throughout the class and those of us that didn’t go Navy became well aware of him and started tracking him after that.”

McCain – the son of the admiral who took charge of U.S. forces in Vietnam during the war – was offered his release by his North Vietnamese captors, but refused unless all those captured before him were released as well. He spent five more years as a prisoner before being released.

“How many others, knowing they could go free would subject themselves to five more years of torture because he adhered to the standard, first man in, first man out?” Biden asked. “I challenge you to find more than a couple handfuls of heroes, that would step up to that standard, to be beaten punished, his bones repeatedly broken.”

The award was given to McCain not just for his military service but his long political career, which started when he was elected to represent Arizona’s 1st District in 1983.

“In addition to his rather elegant career, we became aware of him as a politician,” Gerson said. “He seemed to have a lot more right answers than many
other congressman did.”

Biden, one of the most senior Democrats in Congress before he became vice president in 2008, praised McCain as the “most independent maverick and man of character the Senate has ever known.” Biden said he served longer in the Senate than all but 13 senators, but “I have never met his equal.”

Gerson said the choice of Biden to accept the award was representative of how McCain’s approach to politics. “He absolutely believed in bipartisanship,” Gerson said.

Adm. Walter Carter Jr., the academy superintendent, said all of this year’s recipients “represent the very best of the 172 years of the long blue line.”

Biden agreed that McCain belongs on the list of the greatest Naval Academy graduates.

“John ranks among the very best the academy in my distinction has ever seen,” he said. “John is an American hero who has lifted all of us up, lifted his nation up.