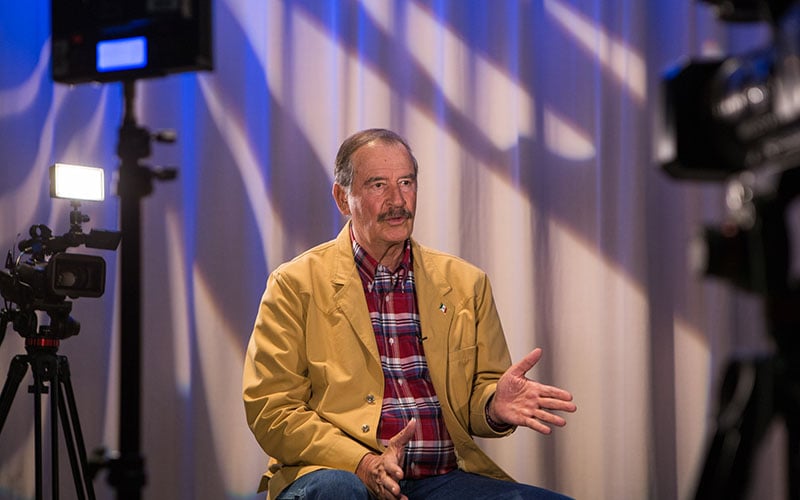 Former Mexican President Vicente Fox discusses the future of politics in Mexico while visiting Arizona State University in downtown Phoenix. Fox, whose grandfather was born in the U.S., calls President Donald Trump “a false prophet. He will take this nation to the desert, to the nowhere.” (Photo by Melina Zuniga/Cronkite News)

PHOENIX – Vicente Fox, former president of Mexico, visited Arizona State University this week to talk about the cannabis industry and to promote efforts to legalize marijuana in Mexico.

He sat down with Cronkite News reporters Lillian Donahue and Andrea Estrada, and he addressed trade relationships, upcoming elections in Mexico and his thoughts on President Donald Trump. Here’s what he said:

On the reason for his visit:

Fox: We are working together with this dynamic industry of cannabis with the vision of entrepreneurs and the state of Arizona. We’re building strong bridges with Mexico on this modern issue and also, of course, to enhance what we are already doing. We have a very, very strong trading relationship between Sonora and Arizona, as well as Mexico and Arizona, so it’s a goodwill trip to promote and also to announce that we’re holding this global cannabis summit (in Mexico in May).

On the purpose of the cannabis summit:

Fox: We’re inviting the global community … to share, to network, to discuss the future of the legalization in Mexico and how can we keep moving this movement moving faster than what it is so that we can take away the money from the criminals, from the cartels and save many, many lives.

On Mexico’s relationship with the U.S.:

On upcoming elections in Mexico:

Fox: It’s a crucial election in Mexico, as all elections are. Again, this time, we have this evil situation that prevailed throughout the 20th century in Latin America: Populism, demagoguery that has destroyed economies, that has destroyed nations like Cuba, like Venezuela, like Argentina, and today, Mexico has one of (these) populist demagogues running for the presidency … but I am absolutely convinced that Mexican people will not go that route, that we will not make Mexico a Venezuela or a Cuba.

On working with Trump:

Fox: Right now, even with Trump, we tried to see how can the relationship be re-established. But if he’s not collaborating, I think that somebody has to domesticate him and bring him down to prudence and intelligence and wisdom that he doesn’t seem to have.

On his criticism of Trump:

Fox: It’s not the person, it’s his policies. It’s wrong policies. I (worry) about the United States. Half of what you see here is American blood. My grandfather was born here. I love this nation. I respect this nation, and I feel bad that it’s in the hands of Trump right now. … He’s a false prophet. He will take this nation to the desert, to the nowhere. He doesn’t know what to propose.