Vianey Perez, 21, received protection under the DACA program at 16 and uses her driver’s license to get to work and school. (Photo by Leah Goldberg/Cronkite News)

PHOENIX – The U.S. Supreme Court declined on Monday to hear the appeal brought by Arizona to deny DACA recipients from receiving and retaining driver’s licenses, prompting the executive director of the Arizona Dream Act Coalition to declare “justice was served.”

“We always knew that we were on the right side of history and that there is no harm caused by immigrant youth driving legally in Arizona,” said Karina Ruiz, who also is recipient of the Obama-era Deferred Action for Childhood Arrivals program. “We also know that this decision would affect the whole nation because it was taken all the way up to the Supreme Court.”

The ramifications of not having a driver’s license is much higher for undocumented people than it is for U.S. citizens, she said.

“We could be stopped for a broken tail light and that could lead to a detention – possibly we could end up in the detention center,” Ruiz said. “Our car could be towed and we would lose the ability to have a reliable transportation to our jobs and to school.”

She expressed how driving is a luxury and public transportation in Arizona is not reliable enough to live car-free.

The U.S. Court of Appeals for the Ninth Circuit last year struck down the Arizona policy, ruling the state can’t develop its own definition of immigrants who are authorized to be in the United States because only the federal government has that power. Arizona then appealed to the Supreme Court, saying the lower court’s decision infringed on state sovereignty.

Karen Tumlin, legal director at the National Immigration Law Center said that with this ruling, Arizona becomes the last of the 50 states to allow DACA recipients – who were brought to the country illegally as children – to receive and retain driver’s licenses.

Tumlin, who is also on the legal council representing the Arizona Dream Act Coalition said courts so far have been ruling in favor of the estimated 800,000 DACA recipients in the country.

“The courts repeatedly found that Governor Brewer’s attempts to deny DACA recipients is unlawful,” Tumlin said. “I think the Supreme Court just said there is no need to intervene.”

“Our case has always been about more than just driver’s licenses. It’s about the separation of powers and whether the president, any president, can unilaterally act and bypass Congress to create new laws. We are disappointed in today’s decision because we believe the court sidestepped the underlying issue of whether President Obama had the authority to create DACA. It’s up to Congress now to determine how to address DACA policy and whether to provide recipients with a legally sound and lasting solution.”

Before the DACA program, employment-authorization documents were considered sufficient proof by the Arizona Department of Motor Vehicles for those seeking a license. 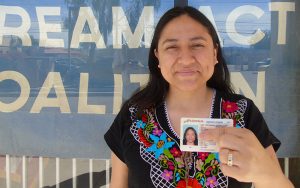 “It gives me freedom to move around, to be a more productive member of this society, which is what I want to do as an immigrant,” said Karina Ruiz, executive director of the Arizona Dream Act Coalition. (Photo by Leah Goldberg/Cronkite News)

Brewer instructed state officials to stop the practice, with those applying for a license having to provide additional proof they were in the country legally.

When current Gov. Doug Ducey was voted into office, he did not end the legal case.

In Ruiz’s opinion, by doing this, Ducey “decided to continue and spend our tax money against immigrant youth.”

Vianey Perez, 21, a DACA recipient since she was 16, is the program coordinator for the Arizona Dream Act Coalition. She drives to work and to classes on Arizona State University’s Tempe campus.

“I don’t have to worry about being pulled over and worrying about, ‘Dang, I don’t have an ID on me,” said Perez, who focuses on civic engagement and voter registration. She said the DACA community is under attack.

“There’s a face to these numbers and to DACA,” Perez said.

Ruiz said she and other DACA recipients need to drive just like everyone else in Arizona.

“For me, I can take my kids to the doctor now and I can take them to school,” Ruiz said. “On a personal level, it gives me freedom. It gives me freedom to move around, to be a more productive member of this society, which is what I want to do as an immigrant.”

DACA recipients have already made headlines twice this year. First, when a federal judge allowed DACA recipients to reapply after the Trump administration rescinded the program in September 2017, and again when the Supreme Court declined to hear the Trump administration’s plea to bypass federal courts and get the high court to end the DACA program.

Encouraged by these small victories, Ruiz said DACA advocates have to keep the pressure on Congress to come up with a permanent solution.

“We cannot drop the ball,” she said. “They need to understand the urgency.”

“Even though we can renew, even though we get to keep our licenses, even though there are students that are still able to go school and pay instate tuition, there are also other immigrant youth who didn’t qualify for DACA and who are at risk of deportation right now.”

Additional reporting for this story provided by Ariana Bustos.