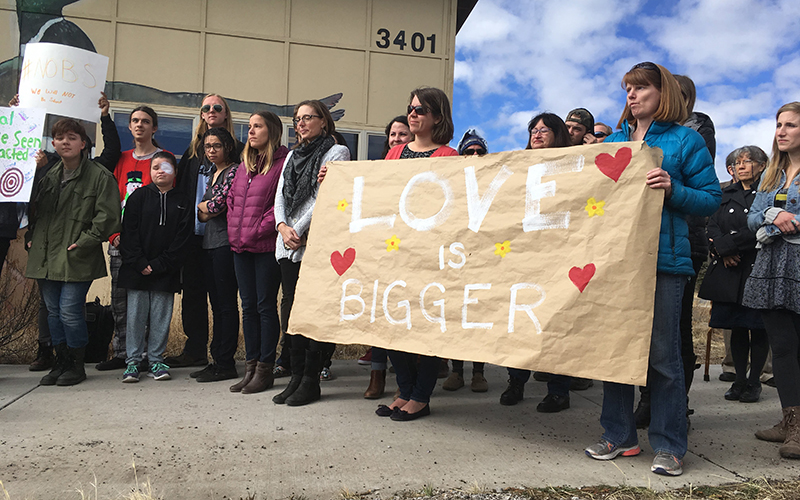 The gun forum took place Wednesday after nearly the entire student body, as well as teachers and administrators, walked out of Flagstaff Arts and Leadership Academy to honor the Parkland, Florida, shooting victims and call for stronger gun control. (Photo by Chris McCrory/Cronkite News)

The forum was conducted hours after Flagstaff high school students, along with thousands of others across the country, joined in National Walkout Day to honor the 17 victims of the Feb. 14 Parkland, Florida, school shooting.

Most on the forum panel called for stricter gun control.

Democratic Arizona House candidate Felicia French wondered why any gun owner would have an issue with registering firearms so law enforcement officials could better track who has access to guns.

“What is it going to hurt to have your gun registered? They’re not taking it away,” said French, who is vying for the Flagstaff district now held by Republicans. “We’re all talking about being responsible, rugged individualists here, and that’s part of it.” 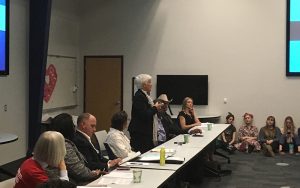 Flagstaff Mayor Coral Evans called for the abolishment of a law that prevents cities with gun buyback programs from destroying the weapons. Any buyback program in Arizona must resell the guns or face state sanctions.

“It’s amazing that we have a state that screams about state’s rights against the federal government, but it’s constantly interfering with the local rights of the local government,” she said. “None of us have enough money in our coffers to take a lawsuit, and they did that deliberately.”

“If we can’t change things at the national level, what about at the local level?” she asked.

But many on the panel said the most effective way to curb gun violence in schools was more education funding.

While more school resource officers or armed teachers on campus may make people feel safer, NAU education professor Whitney Tapia said the more practical solution is “properly funding our public schools, so we can take care of our students.”

That will lead to more manageable class sizes and more money for counselors and mental-health services to help point to troubled students.

“There are warning signs from early on,” she said.

Gov. Doug Ducey, in a series of tweets Thursday, outlined a different set of solutions, including tighter scrutiny of firearms purchases and a larger law enforcement presence on campuses.

But he acknowledged the lack of mental-health resources at schools, vowing to address that shortfall in his legislative proposals.

Some of the priorities I’ve heard:
✅Increased mental and behavioral health resources at schools
✅Restricted access to weapons for individuals who pose a danger to themselves or others
✅Cracking-down on people illegally possessing weapons

“In the overwhelming majority of the deadliest mass shootings in the last 20 years, the shooter exhibited obvious signs of being a threat,” Ducey tweeted. “Why not have laws and a process to restrict these individuals from possessing or obtaining guns?”

He tweeted that his office was working to develop a bipartisan bill to address the issue.

But the governor could face an uphill battle against the Republican-led Arizona Legislature, which effectively shut down any gun control discussion last month after House Democrats failed to force a vote on a bill to ban bump stocks, which allow semiautomatic rifles to fire almost like a machine gun.