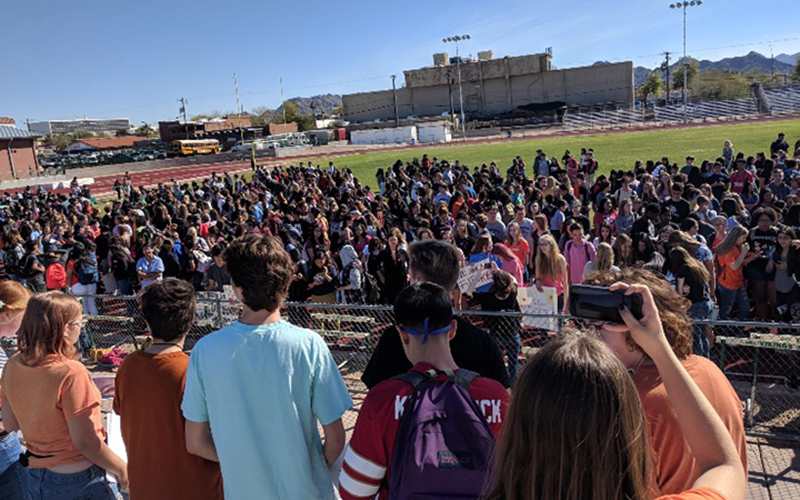 More than 100 students took to Sunnyslope High School’s football field at 10 a.m. Wednesday to read speeches and hold signs in a 45-minute rally that included 17 minutes of silence to honor the 17 killed in the Parkland shooting. (Photo courtesy Sunnyslope junior Kelly Smith)

WASHINGTON – High school students across the country walked out Wednesday to demand action on school safety, but how far they walked and what they faced when they walked back in varied by school district.

In Arizona, there was no set policy on how schools were to manage the hundreds of students who participated in school demonstrations marking the one-month anniversary of the shooting at Marjory Stoneman Douglas High School that killed 17 and wounded 14. The decision was left to individual school districts.

But Heidi Vega, spokeswoman for the Arizona School Boards Association, said that while there was no single approach for handling the walkouts, many schools took the protests “very seriously” and worked with students who organized the events.

“We are letting schools have the final decision, but we did send out an official statement to schools with tips on handling student activism and a resource list,” Vega said. “Schools have different approaches, but many are requiring them to have their demonstrations on campus at a specific time.”

She saw that with her own children, whose schools required that students remain on school grounds. Vega cited an email from Mountain Ridge High School, which one of her children attends, that warned students who left campus could be subject to suspension and told parents there will be a “strong presence from the Glendale Police Department” on hand.

“We are a learning institution, and we value the academic rigor we have always upheld. We have high expectations for student behavior, and will follow district policy in addressing misbehavior. It is unsafe and against district policy for students to leave campus without permission,” the statement said.

Some school districts, such as Chandler Unified School District, did not need to worry about how to handle a student walkout because the East Valley district is on spring break this week. Others, such as Madison Traditional Academy in Phoenix, opted instead for a “day of caring” that focused on moments of silence and open dialogue about shootings rather than an actual walkout.

At Sunnyslope High School in Phoenix, students were required to stay on campus but school administrators gave them 45 minutes for the rally. Some districts had allowed time out of class, but limited it to 17 minutes to honor the 17 victims in the Stoneman Douglas attack.

Washington-area students walk toward the White House during a national school walkiout to mark the one-month anniversary of the Parkland, Florida, school shootings. (Photo by Kyley Schultz/Cronkite News)

Police were on hand for the student walkouts, but the events were peaceful if raucous. Many Arizona schools allowed walkouts as long as students were orderly and stayed on campus. (Photo by Kyley Schultz/Cronkite News)

Many of the thousands of students who showed up for rallies at the White House and the Capitol were carrying handmade signs with political and sometimes personal messages. (Photo by Kyley Schultz/Cronkite News)

The protests came hours before the House passed a bill aimed at helping police and teachers head off potential school violence, a proposal that the Trump administration welcomed Wednesday. (Photo by Kyley Schultz/Cronkite News)

Many schools in Arizona allowed walkouts if students stayed on school grounds, but thousands of Washington-area students left campus to head for the White House and the Capitol to rally. (Photo by Kyley Schultz/Cronkite News)

Harper Meadows, a junior at Sunnyslope who helped organize the students, said students were told that as long as they remained on the field and were not disorderly during the allotted time, they would not be punished by the school. The Sunnyslope students observed 17 minutes of silence for the victims, followed by speeches.

Meadows said it was not hard to organize the movement through social media, and that administrators were willing to give them a voice as long as they followed school rules.

“After that (the 17 minutes of silence), we had selected students go up and read speeches they wrote, which really brought everyone who participated together even more,” Meadows said. “I’m grateful they (administrators) let us have the time, because it is letting us know that they want us to be heard.”

“When kids realize they are heard and valued, it helps build their trust with administration rather than seeing them in a negative light,” Menard said. “But safety is always our number one priority, so making sure kids have a platform that doesn’t violate school policies is crucial. We want cooperation and we want to validate their feelings.”

Walkouts happened across the country, including thousands of students who rallied at the White House and the Capitol on Wednesday.

The marches came the same day the House gave overwhelming approval to a bipartisan bill that would fund training to help teachers and police recognize warning signs of a potential attack, pay for metal detectors and other security measures and set up commission to look into ways to strengthen school security policies.

“No child should be worried about their personal safety at school and no parent should send their kids off to school uncertain if they will ever see them again,” McSally said in statement released by her office. “The classroom should be a safe place to focus on learning, not a combat zone.”