Advocates spread 7,000 pairs of shoes over the East Lawn of the Capitol on Tuesday to bring attention ot the thousands of children they say have been killed by firearms in the U.S. in the past six years. (Photo by Kyley Schultz/Cronkite News) 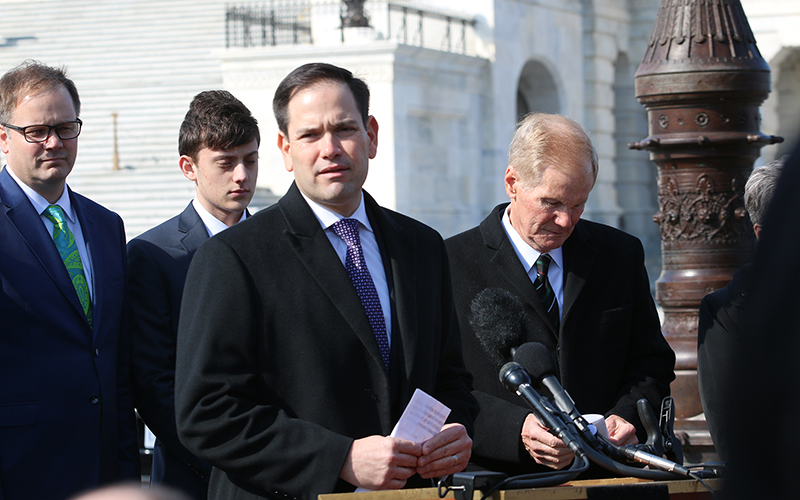 Sen. Marco Rubio, R-Florida, said the STOP School Violence Act addresses the most important issue of school gun violence, which is identifying and stopping those determined to do violence before they do it. (Photo by Kyley Schultz/Cronkite News) 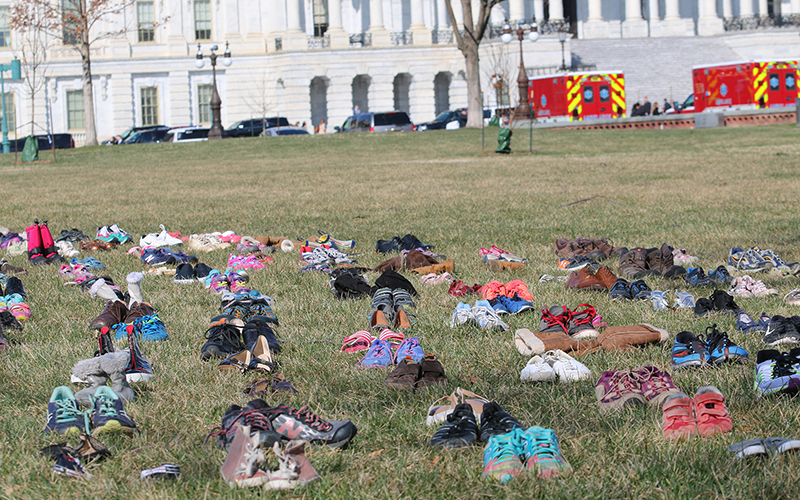 Each pair of shoes in the display on the Capitol lawn was supposed to represent a child killed in the past six years by a firearm, whether in-school or out, whether done intentionally or accidentally. (Photo by Kyley Schultz/Cronkite News)

WASHINGTON – Thousands of shoes lined the lawn in front of the Capitol Tuesday, a display advocates said represented all the children killed by firearms since the shooting at Sandy Hook Elementary School six years ago.

“We wanted to make the absent people present here,” said Oscar Soria, senior campaigner for Avaaz, the group that arranged 7,000 pairs of shoes.

Organizers said the display was meant to let the dead join the living students who have scheduled a national walkout day Wednesday, the one-month anniversary of the Valentine’s Day shooting Marjory Stoneman Douglas High School. In that latest mass shooting, a 19-year-old former student opened fire in the Parkland, Florida, school, killing 17 and injuring 14 others.

The walkouts also come the same day that the House is scheduled to vote on a bipartisan gun-control bill, one of many circulating in Washington in the wake of the Parkland attack.

Those range from a bill by Sens. Jeff Flake, R-Arizona, and Dianne Feinstein, D-California, that would set 21 as the minimum age to buy a gun to a White House plan, rolled out Sunday evening, that includes “hardening security for schools” and tightening background checks on gun purchases.

The bill being voted on Wednesday would provide funding for crisis training for school officials and local law enforcement, as well as funding for prevention measures in schools such as metal detectors and anonymous reporting systems.

“No parents should ever worry about sending their children to school,” Sinema said in a statement from her office. “This bill is a step we can take right now to ensure our classrooms are safer and more secure.” 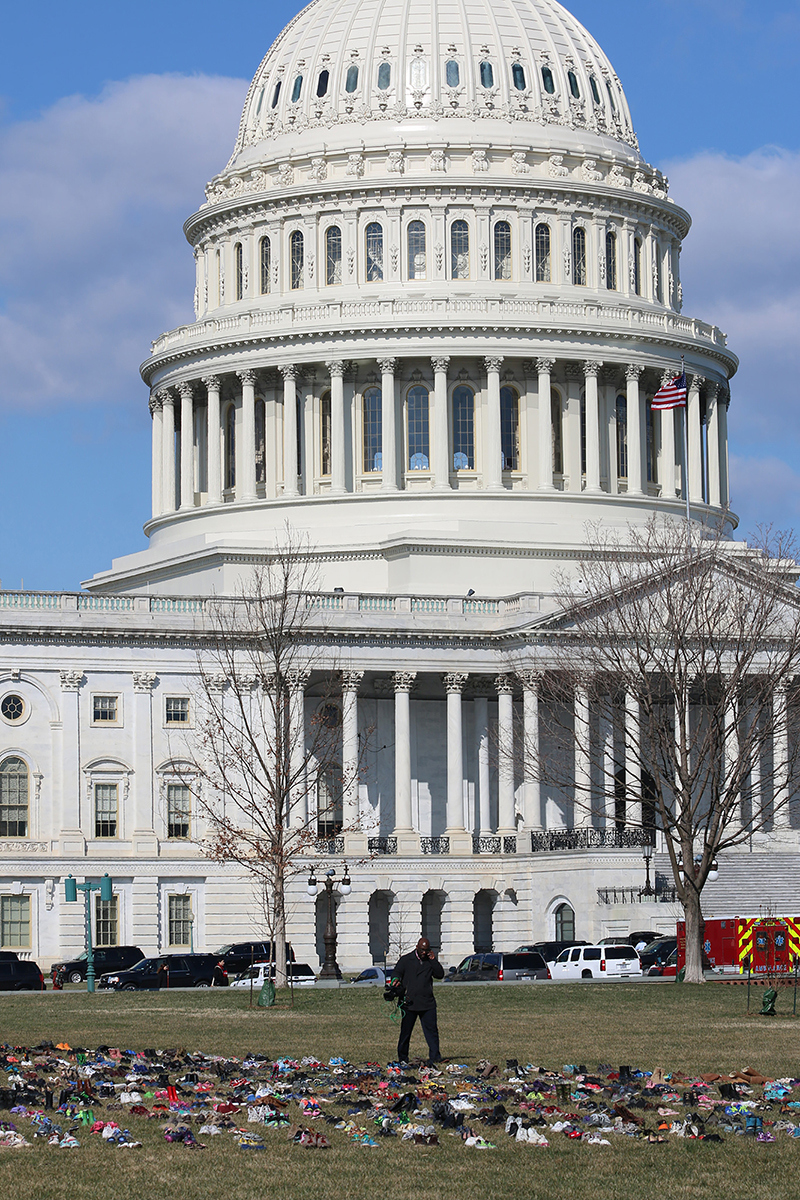 The group Avaaz said it organized the display of shoes at the Capitol to bring attention to a planned school walkout by students across the country and to prod lawmakers to act on gun bills. (Photo by Kyley Schultz/Cronkite News)

The bill would also train educators to recognize threats from individuals struggling from mental health issues, which Sen. Marco Rubio, R-Florida, called “the most important part” of gun reform in a news conference Tuesday.

“It is not designed to solve every issue or every problem with regards to this,” Rubio said of school gun violence. “But it is designed to address the most important part of this, and that is that we have individuals in this country that for various different reasons have committed themselves to taking the lives of other people, and we need to find out who they are and we need to stop them before they do it.”

Soria said he has been encouraged by the amount of bipartisan support in Congress for action and hopes that, given all the talk by government officials, “some solutions will come out of this.”

The Flake-Feinstein bill would raise the minimum age requirement to purchase assault weapons from 18 to 21, the current age required to buy a handgun – a move Flake called “long overdue.”

President Donald Trump had expressed support for raising the age requirement in the weeks after Parkland, but that proposal was not part of the administration’s plan unveiled last weekend.

The president’s proposal also establishes a school violence prevention commission chaired by Education Secretary Betsy DeVos, as well as backing a bill that would strengthen background checks for gun buyers.

While Soria said the display of empty shoes is meant to draw national attention to the need for gun control, advocates are also looking to Wednesday’s protests and other actions by students to compel change.

Gerry Hills, the president and founder of Arizonans for Gun Safety, voiced her strong support for the school walkouts, which she said are “opening the front to a much-needed discussion of gun control.”

“This is the Columbine generation. Their entire school experience has been overshadowed with school violence and mass shootings,” Hills said.

“It’s not that we don’t have the ability to create change, it’s that we haven’t had the political will. Now we have kids who are calling out those adults in power, and we’re seeing some accountability,” she said.

The 7,000 pairs of shoes displayed at the Capitol were meant to represent all children killed by a firearm – whether in-school or out, intentionally or accidentally – since Sandy Hook. Avaaz based the number on a study in the July journal Pediatrics which estimated that 1,297 children were killed by firearms every year from 2002 to 2014.

Soria agrees the actions being taken by current school-age children across the country is the difference between now and six years ago, when little legislative action was achieved in the wake of Sandy Hook.

The “new generation already made it clear that they are not going to swallow this,” Soria said. “People are just starting to think this is senseless.”