ISM Raceway displayed a poster in their media center of what finished renovations will look like come November. (Photo by Shawn Moran/Cronkite News) 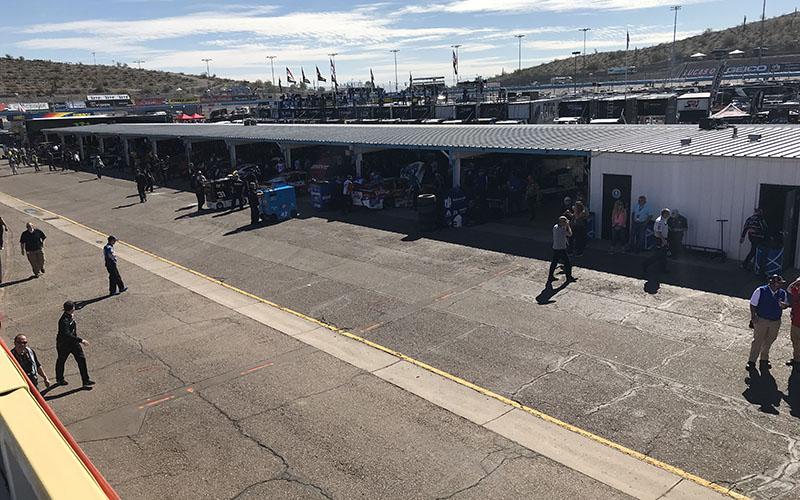 With improvements coming to the garage area in the coming months, many fans have said they are looking forward to the changes they will see at ISM Raceway later this year. (Photo by Shawn Moran/Cronkite News)

AVONDALE — The Ingenuity Sun Media Raceway is a construction zone. Thirty years have passed since the track made its debut as a stop on NASCAR’s premier league schedule, making it due for a $178 million pitstop.

Since late last year, the newly renamed ISM Raceway has been undergoing major renovations that include changes to the track as well as the fan experience. The raceway is coming off its first NASCAR weekend of the year with fans from all over the southwest coming to watch their favorite drivers in the TicketGuardian 500. With only some of the renovations completed, ISM will hold its grand opening at the Can-Am 500 in November.

How will that change affect how drivers prepare for the two annual races in Phoenix? While most drivers do not foresee the change having too great of an impact on strategy, 11-time winner in Phoenix and 2015 Cup series champion Kyle Busch believes some drivers might get too greedy heading into the new Turn One.

“You only have a certain amount of space before you get down into Turn One,” Busch said. “I’m sure you’ll see some desperation moves and some bad decisions be made and some carnage ensue.”

For the fans, these changes will bring new and improved access to the garage. The renovations will also include the new Trackside Bar & Grill as well as the Wheelhouse/Roll Bar, a state-of-the-art facility inside of the gates that includes two separate entertainment venues.

Before Sunday’s race, fans were allowed onto the track to enjoy a pre-race concert by country music star Jana Kramer as well as the freedom to take photos and ask driver’s for autographs.

The improvement some fans are looking forward to the most, though, is the demolition of the Foyt and Bryan grandstands on the north side of the track. With the addition of 45,000 grandstand seats on the southside of the track, what is now the most popular seats will soon be torn down.

The reason fans are so excited about this switch? The sun plays a huge part.

“Of course the accommodations are going to be nicer, but the main thing as somebody that’s watching the race, the last hour and a half or so you don’t see an awful lot going off into that direction,” Colorado Springs native Gary Spreng said. “They’re going to block a lot of sun and that’s going to make it more enjoyable.”

The sun was not much of a factor for the first race of NASCAR weekend in Phoenix. On Saturday, Xfinity Series drivers, along with fans, were forced to deal with two rain delays totaling around two hours during the DC Solar 200. Phoenix native J.J. Yeley was surprised by the detour Mother Nature threw at the competitors this weekend.

“It never rains here,” Yeley said on the Fox broadcast.

While it does not rain often in the valley, this is the second NASCAR event in Phoenix to be engulfed in a rainstorm since late 2015. That did not stop racing fans from coming out to support their favorite up-and-coming drivers. The race concluded after the delays with Cup series veteran Brad Keselowski racing to Victory Lane in his first Xfinity Series race of the season. Yeley, the only Arizona native to be involved in Saturday’s race, finished in 21st.

The two drivers from Arizona who drove in Sunday’s TicketGuardian 500 mostly struggled on their hometrack. Born and raised right down the road in Glendale, Michael McDowell finished 32nd out of 37 drivers. Alex Bowman, the 24-year-old up-and-coming driver from Tucson, had the best finish of the weekend, finishing 13th.

“I’ve always sucked here, I don’t know why,” McDowell said. “It’s not the track’s fault, it’s not even my team’s fault. This is a place that I just haven’t had the best runs at but I look at that as a challenge.”

ISM Raceway will have their much-anticipated grand opening when NASCAR returns to Arizona in the fall. According to McDowell, the renovations are well-deserved for the race fans of Phoenix.

“This place is always packed. We always have tons of fans, tons of campers and there’s some tracks that we go to where that isn’t the case anymore. … I think they deserve it and it’s going to be great for the fans.”