Democrat Brianna Westbrook and Republican Christopher Sylvester, both candidates in the Congressional District 8 special election, at her campaign watch party Tuesday. Westbrook is already eyeing another run in August for the seat being vacated by Rep. Trent Franks, R-Glendale. (Photo courtesy Brianna Westbrook)

WASHINGTON – Even before she lost the Democratic primary in the special election to replace former Rep. Trent Franks, R-Glendale, Brianna Westbrook had her sights set on a primary in August when the seat will be up again.

Westbrook said Wednesday that her campaign has collected 800 of the more than 1,200 she is likely to need to get her name on the Democratic primary ballot this fall.

“Since I started my campaign last year I was aiming for August, for the midterm election,” she said. “But I was very pleased with last night’s results; we’ve started a people movement.”

“Last night’s results” were a loss in the Congressional District 8 Democratic primary to Hiral Tipirneni, who got 21,703 votes to Westbrook’s 14,701, a split of about 60 to 40 percent, according to unofficial results from the Arizona Secretary of State’s office.

Tipirneni will face off against former state Sen. Debbie Lesko, who won the Republican primary by a comfortable margin over a crowded field of 12 candidates. Lesko took just under 36 percent of the vote, easily outdistancing her nearest challengers Phil Lovas and Steve Montenegro, also former state lawmakers, who won 23.88 and 23.82 percent of the vote, respectively.

Lovas, Montenegro and Westbrook all conceded Tuesday night, but neither Lovas nor Montenegro returned calls Wednesday for comment on their plans. 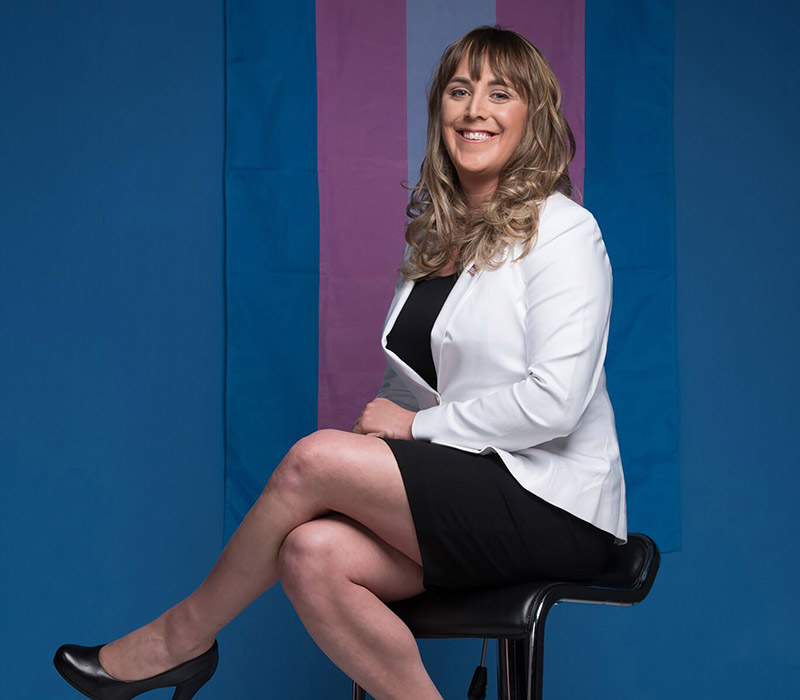 Brianna Westbrook, a liberal, transgender Democrat in a conservative Republican district, said she is ready to launch another bid for Congress this fall. (Photo courtesy Brianna Westbrook)

Tipirneni would only say Wednesday that she is focused for now on the April 24 special election against Lesko, which she thinks she can win with enough Democratic and independent support.

“We hope that Brianna and her supporters can unite behind our campaign because that’s the only way we’ll beat Debbie Lesko,” Tipirneni said.

The April election is only to fill out the rest of the term for Franks, who resigned suddenly in December when the House Ethics Committee said it planned to launch an investigation into allegations he sexually harassed female staffers.

Whoever wins the seat in April will have to stand for re-election this fall, with a primary in August for the November midterm elections.

Most analysts expect that Lesko will win the special election in the west Valley district, where registered Republicans make up 41 percent of voters, compared to 24 percent for Democrats and 34 percent independent.

“This is a solid Republican district,” said David Wasserman of the Cook Political Report. “There’s very little Democratic DNA there.”

Westbrook, a transgender, liberal activist who had not previously run for office, said that although she plans to run again, her current focus is on doing “everything I can to make sure Debbie Lesko doesn’t win.”

Westbrook would not say whether she would still run in August if Tipirneni were to end up as the incumbent in August. “Right now I’m going to do what’s best for the Democratic Party,” she said.

She said that when she started her campaign, she expected to be facing an August primary for the chance to run against an incumbent Franks. The special election came as a surprise, but her plans for a fall campaign have not changed.

The Arizona Secretary of State’s Office has not set the deadline or the number of petition signatures that will be needed to get on the District 8 ballot this fall, but it will be more than the 1,230 signatures required for the 2016 election, spokesman Matt Roberts said Wednesday.

Getting on the ballot is one thing. Winning as a Democrat in the solidly Republican district is another, analysts said.

Republicans may have hurt themselves in the primary, when Montenegro was accused of an inappropriate relationship with a female staffer and Lesko was accused of improperly using state campaign funds for her congressional race.

“A lot of eyes are already on this race so it could change things,” said Leah Askarinam, political analyst for Inside Elections.

But the charges in the primary alone likely aren’t enough to tip the district to a Democrat, unless the charges get much worse, experts said. They compared the district to Pennsylvania’s District 18, which President Donald Trump won by 20 points in 2016, but where Democrats have started gaining in the polls ahead of a special election there.

Still, Kyle Kondik, managing editor of Sabato’s Crystal Ball at the University of Virginia’s Center for Politics, thinks there simply are not enough Democratic voters in District 8 to rally on Election Day.

“It will be interesting to see if any national third parties dump money into the Arizona race,” Kondik said. “But it’s highly unlikely it would translate into a Democrat winning because turnout is too low for them in that district.”

But Westbrook is not giving up.

“We were outspent 10 to one, but we have national support,” she said, vowing to collect 3,000 signatures by the end of May.