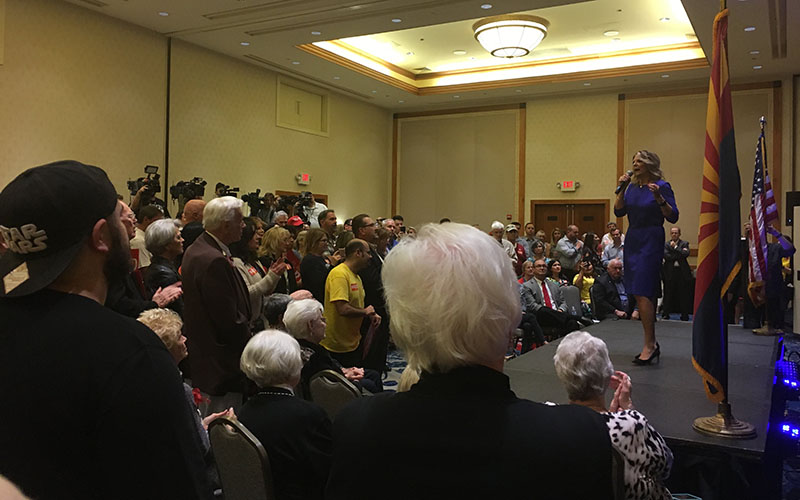 SCOTTSDALE – Republican Sen. Rand Paul, a standard bearer for Tea Party conservatives, praised U.S. Senate candidate Kelli Ward at a campaign rally in Scottsdale last week, calling her a “constitutional conservative” who will stand up to the Washington, D.C., establishment.

“It makes a difference who you send up there. If they do not have the courage of their convictions, they will be a rubber stamp for leadership,” Paul said. “She will not be afraid of the establishment and they will not boss her around and they will not tell her what to do.”

“Just because someone wears red clothing or has an R after their name, there are times when we are not being served in the way that we as Republicans, as conservatives, as liberty lovers, want to be served,” Ward said.

Paul told about 150 people at the rally that Ward was the only true conservative candidate in the race to replace Sen. Jeff Flake. He announced he would not run for re-election in 2018 after months of verbal sparring with President Donald Trump, saying the path to a GOP primary victory for a traditional Republican like him is “very narrow.”

Paul had endorsed Ward in November.

Paul, a fiscal and social policy conservative, described himself as the “least-liked man in Washington” after he blocked a government spending bill to keep the federal government running earlier in February.

Ward said she would be a “fierce defender” of the Constitution in D.C., including the Second Amendment on the right to bear arms. At the rally at Scottsdale Embassy Suites, two days after the deadly school shooting in Parkland, Florida, that killed 17 people, Ward said the amendment was “under assault, every day.”

“Law abiding gun owners should not fear, because the solution to a bad guy with a gun are good people with firearms,” Ward said.

The candidate expressed support for Trump’s proposed border wall, saying it needed to be funded before any immigration bill could pass Congress.

“Immigration, obviously, is a hot button right now in Washington. I will tell you we have got to learn from our mistakes that we’ve made as a country in the past,” Ward said. “We have to secure the border first before we start talking about permanent solutions for people who came here illegally, no matter how they got here.”

Despite attempts to align herself with the president – who endorsed her on Twitter last year – on most issues, Ward said she was concerned about an increase in federal spending. Trump released a federal budget proposal last week that would increase the country’s debt by a projected $7 trillion.

“We’ve got to continue to keep taxes low, regulations low, but also we have to look at our spending at the federal level,” Ward said.